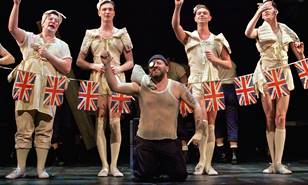 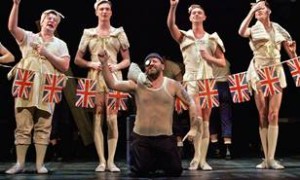 by Gilbert and Sullivan

The much-loved, highly-acclaimed all-male Gilbert and Sullivan is embarking on an extensive UK Tour to ensure no-one misses the boat. Join the hilarity of Gilbert and Sullivan with the award-winning company that brought you the all-male productions of The Pirates of Penzance (winner of Best Off West End Production at What’s On Stage awards), Iolanthe and Patience.

Set in the hold of a Second World War battleship, the cast of 16 skilfully play both burly sailors, in the working underbelly of the vessel, and their lady visitors. This is a frisky, innovative and heartfelt production. Its simple set and beautiful costume design allow maximum scope for inventiveness from the cast, whereby physicality and voice are key to telling the story.

Inspired in part by director Sasha Regan’s experiences of performing Gilbert and Sullivan at a single-sex school, the production plays on the humour that can emerge from these gender changes.

One of the most popular Gilbert and Sullivan operas, dealing with the age old conundrum of love between social classes, Pinafore has infectious tunes and a beautifully constructed libretto which is a perfect match for this creative team’s inimitable style.

Lizzie Gee was nominated for Best Choreographer for H.M.S. Pinafore at the OffWestEndAwards 2014.