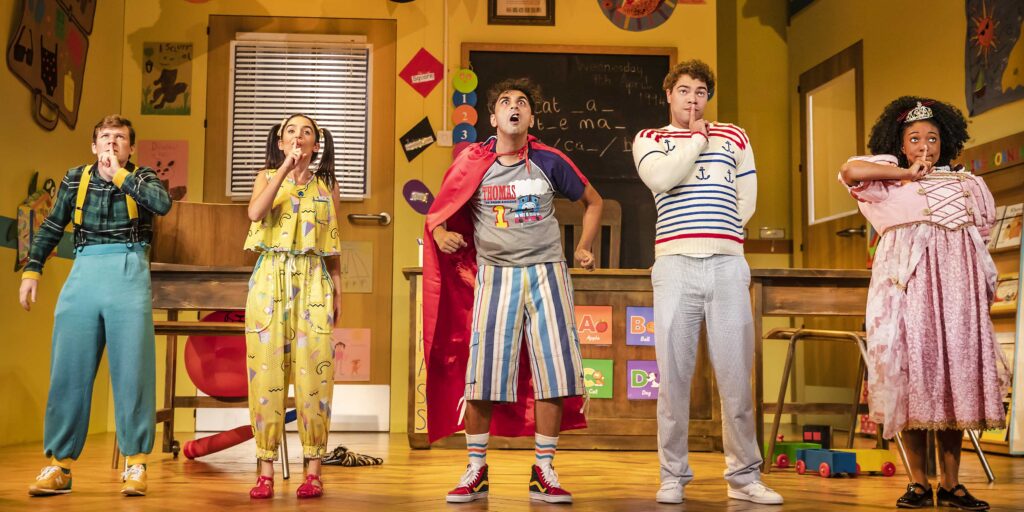 Mischief Theatre return to Brighton with their latest offering and this time nothing goes wrong. Groan Ups is an observational comedy which follows the progress of five children at three stages of their development, in Year 2 (aged 6), year 9 (aged 13) and at a school reunion (aged 26). Whilst previous Mischief productions like their first hit The Play That Goes Wrong and The Comedy About a Bank Robbery paid homage to the greats of physical comedy like Laurel and Hardy and Buster Keaton, Groan Ups is more reminiscent of writers like Ayckbourn, Godber and Potter (Dennis not Beatrix).

Do we choose who we become? Is the story of our lives already written? Do we ever really grow up? Nature versus nurture. We watch the unruly classroom on their journey through anarchic secondary school teenagers to the challenges of adulthood. Groan Ups was the opening salvo of a three-play season, across a year-long residency, at the Vaudeville Theatre in London just before the pandemic struck. Once again, Mischief’s work is suspiciously derivative of superior literary works and it is difficult not to be reminded of plays like Teechers by John Godber, Blue Remembered Hills by Dennis Potter and Donkeys’ Years by Michael Frayn. All of these plays would surely have been on any LAMDA student’s reading list so it’s easy to see where writers Henry Lewis, Jonathan Sayer and Henry Shields got their inspiration.

There are a lot of positives including the performances of the cast of seven. Lauren Samuels as Katie (the swot), Matt Cavendish as Simon (the bullied) and Dharmesh Patel as Spencer (the academic failure) are all particularly impressive as is Jamie Birkett as Simon’s ‘girlfriend’, Chemise, a Frenchwoman with a distinctly suspicious Geordie accent. It would have been better if Birkett had dropped the accent altogether when she was alone or with her ‘boyfriend’, however, her comic timing was impeccable and very, very funny. To be honest, I could have done without the scene change vignette between her and Killian MaCardle as teachers Mr White and Miss Murray which was both amateurish and unfunny but MacCardle is excellent as Paul who turns up at the reunion although no-one has any memory of him.

The opening set of an infant’s classroom is designed in great detail by Fly Davis complete with oversized chairs and doors but the transformation into the same room with the aforementioned in correct perspective was less impressive and took far too long. This would be my main criticism of the show in that I felt it required a more ruthless director to come in and lose a good twenty minutes of the script. Kirsty Patrick Ward’s production had the feel of a first draft and a director who was working with a script written by half the cast (Lewis, Sayer and Shields were in the original production) and consequently the play is overwritten and becomes predictable with the final denouement signalled half way through Act 1 with school bells and playground whistles.

Overall, there are some very funny moments and a hilarious running gag which revolves around ‘flopping’ and the school hamster. It is definitely worth seeing and with dates next year at Southampton, Poole and Eastbourne, there is plenty of opportunity.