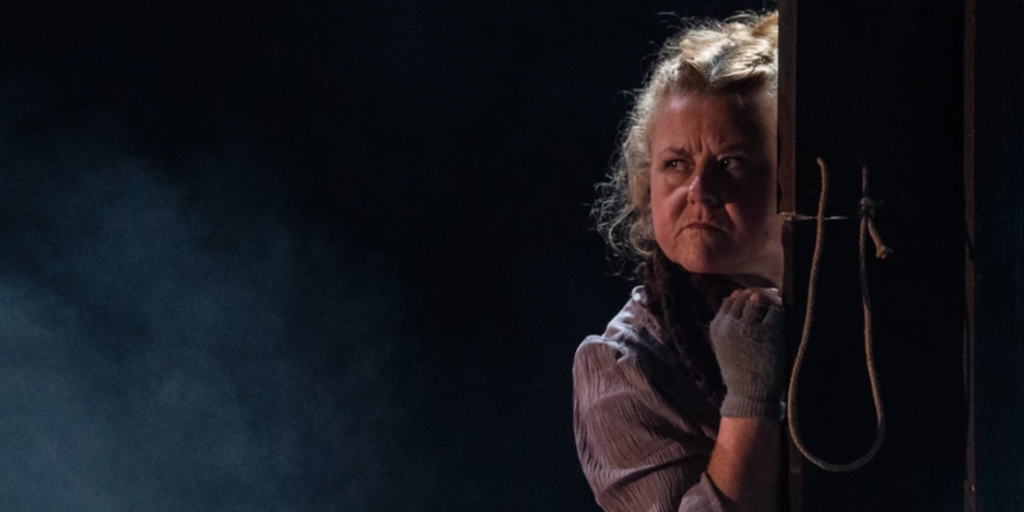 Any opportunity to experience dark gothic theatre, and I’m the first person to book my seat in the audience. We’ve been treated to so many great spooky titles across the years at the Devonshire Park Theatre such as Frankenstein and Jekyll and Hyde – so when the prospect of exploring Washington Irving’s classic thriller Sleepy Hollow, I couldn’t resist the temptation of seeing this live show by Tilted Wig Productions; a first for me from this theatre company.

What struck me on first impression, and throughout the show, was the stunning set design by Amy Watts, she aimed to create a ‘feeling of unease’ for the audience that was certainly achieved; from the large overarching tree lingering on the stage right, to the creaky large wooden barn like backdrop. The hidden spaces were well utilised with secret doors and backstage darkness was used to unsettle the audience at any opportunity.

This eeriness bled through the piercing sound design by Sam Glossop too, with very conventional shuddering horror music used to transition scenes and create a feeling of discomfort. Add to that a touch of magic by illusion Director Filipe J. Carvalho, and some great dance choreography by Chris Cuming, and this created a production that had a constant energy and sense of unpredictability throughout that kept the audience hooked.

The cast, starring household television actors Wendi Peters and Bill Ward (Coronation Street), were strong and all delivered great performances. Sam Jackson as a cryptic Ichabod Crane was superb, with multiple heavy passages of dialogue in this challenging high energy role, he flourished as the lead on stage.

But what about the narrative? Having watched the Tim Burton film many times starring Johnny Depp, I certainly had a particular idea in my mind about how the story may pan out, and this production was very different to my expectations, being much more loyal to Irving’s original text. Some of the most notable differences are, instead of being a private investigator, Crane is a schoolteacher, sent to Sleepy Hollow on an unknown purpose. Furthermore, the focus is centred around the peculiar village folk and their mysterious ways of life, rather than the headless horseman being the central threat. The play had a much more human and character driven focus which certainly gave it an interesting angle.

However, whilst the play was very enjoyable, it felt like it was constantly on the periphery of something bigger, and I was left waiting for the more dramatic horror elements to unfold. When they finally surfaced at the end of the play, I was left a little underwhelmed as it felt as though the delivery didn’t quite land. After so much build up, the masked murderer that emerges from the haunted tree felt more like a common trick or treater. Furthermore, my guest and I personally found the story slightly confusing in places, it felt quite challenging trying to keep up with the characters at times and took lots of post-show discussion to dissect what had happened.

But credit needs to be given to this adaptation, producing a new show during a pandemic is an incredible feat, and perhaps my perception of the original story had been modified by modernised Hollywood glitz. I personally would have enjoyed a larger focus on the horror elements of the story, with more stage time for the wendigo and horseman, but the focus on twisted human nature is still a great exploration of the warped side of humanity and what distorted lengths and sacrifices we could go to in the quest to gain power and long-lasting life. Like every good horror story, the play ends on a very sinister thought-provoking scene, which I’ll leave for you to enjoy if you see it.

It’s worth a visit to sleepy hollow, just don’t travel by horse and carriage – or you may lose your head. For more information visit www.tiltedwigproductions.com.