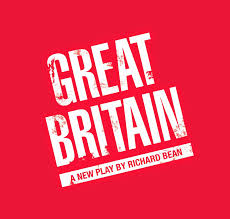 With only 6 weeks to go of it’s run, I was delighted to catch The National Theatre’s Great Britain at the Theatre Royal Haymarket last week.

Great Britain written by Richard Bean opened at the end of June 2014 at the Lyttleton Theatre in June and took the unusual step of not having any previews and announcing it’s West End transfer to the Theatre Royal only a day later.

It is understandable why – Directed by Nicholas Hytner, this fast moving, satirical look at tabloid newspapers is hard hitting and incredibly current in the light of the News International phone hacking scandal that has been all over the headlines this year.

Paige Britain is a young ambitious news editor at The Free Press, she stops at nothing to get exciting newsworthy material for the paper. Readership figures are crucial. When she learns how to intercept private phone calls to get stories, she knows this is a chance for The Free Press to win the rating war.

The question is – where do you draw the line? Should there be a line in the first place? With Britain’s confident and convincing arguments not only politicians and the police in the play but even we, as an audience, begin to doubt our integrity.

Lucy Punch usually plays the lead role of Paige Britain, however I saw understudy Jo Dockery who was phenomenal, she oozed confidence and superiority and gave Paige just the right amount of arrogance she needed.

There is a large supporting cast. The press office is swarming with correspondents led by the loathsome Editor Wilson Tikkel, Robert Glenister all eager to get and sometimes twist a story. There are politicians involved but also the police up to the highest level. Comedy moments are included as well, usually at the expense of the gullible Police Commissioner Sully Kassam delightfully played by Aaron Neil.

The office environment is created on stage by Tim Hately with news stories relevant to the play projected periodically on big screens giving the show pace and focus.

It did not matter that I was ignorant about the whole subject of the News International phone hacking scandal and I really don’t know how close all this was to the truth. I did feel a little bit like a juror at the end of the play. I found the whole subject fascinating. I am so glad that I do not work in the cut-throat world of tabloid journalism, I shall stick to my own little website thank you very much.

Great Britain is an incredible production that I heartily recommend but it only runs at the Theatre Royal Haymarket London until January 10th – get your tickets now.