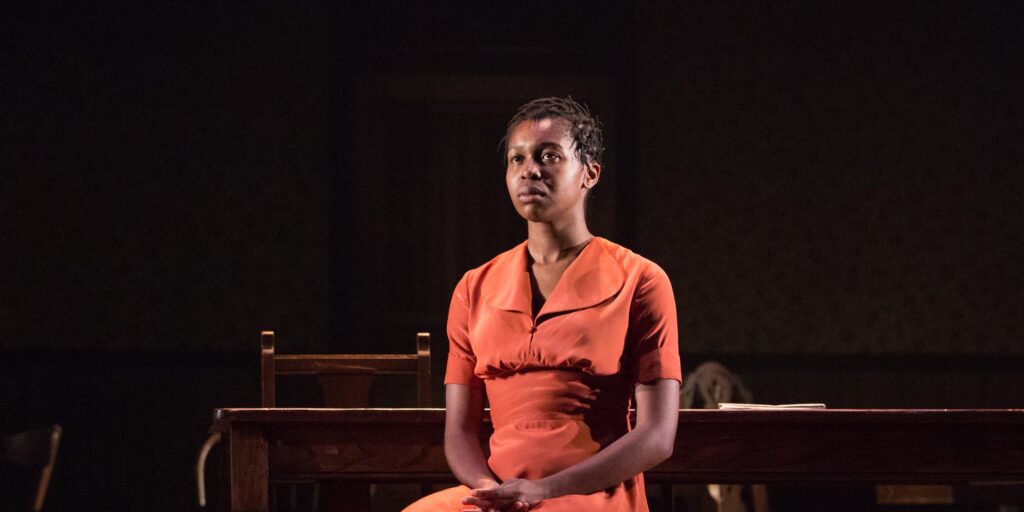 Girl from the North Country
Gielgud Theatre
Until 1st February 2020

Girl from the North Country | Review

I was reticent about seeing Girl from the North Country in 2017 when it opened at The Old Vic and then transferred to the Noel Coward Theatre. Admittedly what put me off was that the music used in the show was based on Bob Dylan’s back catalogue, not really familiar with his music and knowing that generally I am not a fan of jukebox musical I gave the show a miss.

However having seen a wonderful performance on the Olivier awards by Sheila Atim and also having a personal recommendation from friends, my curiosity was piqued so I had to see it before it finishes its latest run at the Gieldgud Theatre. I am so glad I did, I nearly missed a real gem of Musical theatre.

The story is set in a failing boarding house in Duluth Minnesota (Dylan’s birthplace) during the great depression. Nick Laine (Donald Sage Mackay) is the proprietor who is struggling with the weight of caring for his wife Elizabeth (Katie Brayben) who has dementia and his two adult children, Gene (Colin Bates), a struggling writer in love with local girl Kate (Gemma Sutton) but is unsuccessful in obtaining work and Marianne (Gloria Obianyo) a  woman of colour who they have taken care of since she was a baby. Marianne is pregnant and a further drain on their finances adding to Nick’s despair.

Guests at the house are an eclectic mix and include Mrs Neilsen (Rachel John) a widow, who helps out around the house where she can as she plans to open her own hotel one day, the Burkes (Anna Jane Casey and David Ganley) and their son Elias (Steffan Harri) and two travellers who arrive in the dead of the night, a scrupulous bible salesman (Finbar Lynch) and an ex-fighter (Shaq Taylor) trying to start a new life. Their stories interweave with those of the locals and tell of joy, pain and sorrow.

The show is written AND directed by Conor McPherson, he was given permission by Dylan to use the songs in any way he wanted, and the result is stunning. Girl from the North Country as a play with music rather than a musical. Dylan’s songs have been reimagined and enhance the mood of the story rather than tell it. I didn’t realise how many of the songs I would be vaguely familiar with (was there a song sung by Adele in there?). Dylan’s songs have a folky feel to them so despite being written much later they fit perfectly into the 1930s. Instruments from the 30s are used to enhance authenticity, and the cast sing into microphones rather than to each other which draws attention to the songs in a way that doesn’t detract from the story.

The lighting (designed by Mark Henderson) is kept low on the stage giving a feeling of oppression and low mood, and Rae Smith staging is simple and very effective.

The cast of Girl from the North Country gel together aesthetically and harmoniously, bringing the era to life. It is one of those plays where the characters grow on you during the show and by the end you are invested in their future and you care what happens to them.

Girl from the North Country gives us a fascinating snapshot of life and struggles of small-town folk during the depression. This show is well worth seeing.

Girl from the North Country is playing at the Gielgud Theatre until the end of the month.