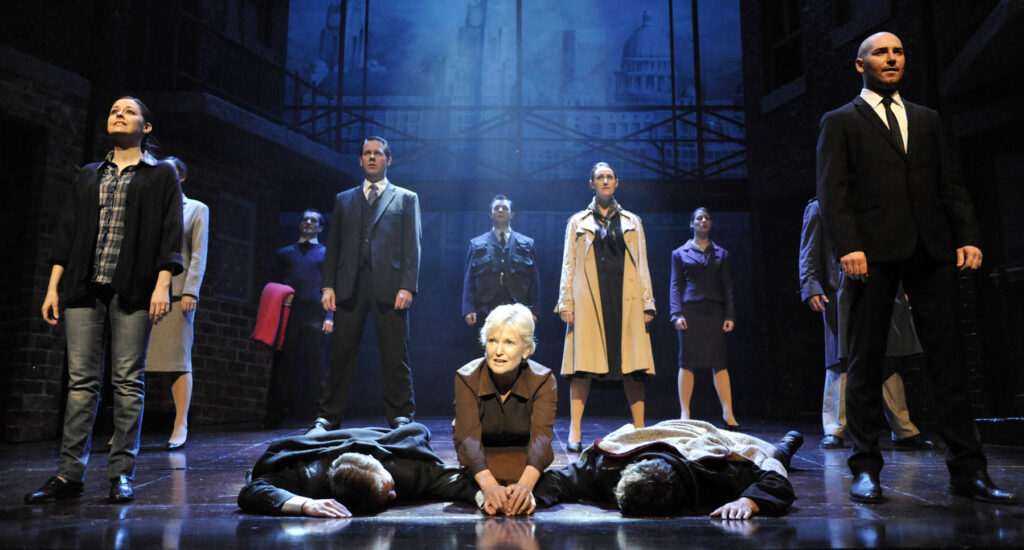 Lyn Paul has been described as the ultimate Mrs Johnstone in Blood Brothers which is a role she has played on numerous tours. She is currently in her ‘Farewell Tour’ which calls at the Theatre Royal Brighton in February. In this interview, she talks about what Blood Brothers means to her, her appearance in Cabaret and THAT coca cola advert.

Oh absolutely, without a shadow of a doubt! Mrs J is just me. Everything that she’s going through I feel, the way Willy’s (Russell) written it is so easy to get over to an audience as it’s actually written as you would speak. Sometimes, when people write a script, you look at it and think, “well, that’s not how I would say it”. But this is so perfectly written and so easy, it just flows, and I just feel that Mrs J is me, so it makes it very easy to play. When I first played Mrs J, I was doing Cabaret and he took me away from all that. I wrote to Bill and asked him if he would consider me for the role of Mrs J, he sent me a letter back by return post, and less than three weeks later I was waiting on the stage at the Phoenix Theatre (West End) to start rehearsals and I cannot tell you what it did to me. I’d never acted and I thought, “oh my god, I can’t do this!” But Bill showed so much faith in me that I will always go back. He’s only got to click his fingers and I’ll be straight in, no problem.

So it was a chance letter that changed your life?

Oh yes, absolutely. I didn’t know Bill although I knew Carl Wayne, who was the Narrator at that point, and he came to see me in a cabaret show I was in down the road from the Phoenix Theatre and he told me “you know, you should go and audition for Mrs Johnstone”. I didn’t even know Blood Brothers, so I asked him about it and said, “I can’t, I don’t act” But he said I should give it a go. So I went back and discussed it with my mum and she said, “Oh Bill Kenwright, he’s a very nice man”. I said, “how do you know, you’ve never met him”, and she said, “well I’ve seen him interviewed and he’s a very nice man, write to him!” Typical northern mum! So I did, I wrote and just said “would you consider seeing me for the role of Mrs J, I’m not Liverpudlian but I can get into the accent”, gave him all that, and I posted it off. Two days later I got a return letter saying, “don’t worry about the Liverpudlian accent love, we’ll sort that, you don’t need one, you’re a Northerner, and I’d love to see you”. And that was it. And from that moment on we became good friends.

And this will be your final time as Mrs Johnstone?

I am beyond thrilled to be returning to this iconic role. I’m honoured to have been given the opportunity to undertake this “Farewell Tour”. It’s such a privilege to be able to play Mrs Johnstone one final time.

While Blood Brothers is what you’re synonymous with, you also toured with Cabaret for Bill – how did you get involved with that?

I got an email from him which said he’d like to put you up for Fräulein Schneider, how would you feel about it? I wrote back and said I would love it, he sent me the script and the parts he wanted me to do, asked me to come into the office, I went in and went through the songs, went up to Bill’s office, we went through the scenes and that was that. Bill has been a very good friend to me and a very good boss, he’s been very loyal to me and I will always be there.

You starred in Cabaret with Will Young, who started out as a pop star like you did – how hard or easy was it to develop acting skills, particularly with no experience?

Well, you’re not being yourself, it’s totally different to standing on stage and being yourself and having to make a speech at the end of a gig, I’m useless at that. But when you go on stage and you’re playing a character, it just seems to happen for me. Especially Mrs. J because I can relate to her so well being a Northern mum and having gone through a lot of struggles in my life, lots of lows. I can relate to her to a great extent, so I feel that it just comes, it just happens.

A lot of people will also know you as a member of the New Seekers and singing that well-known, world-famous song I’d Like to Teach the World to Sing, but can you clear up my confusion over it – did you record it for Coca Cola or after the ad came out?

We recorded the advert first for Coca Cola and then everybody said, “wow, that’s a fantastic song” although the five of us just looked at each other and said, “what?” (laughs) But everybody turned out to be right and we went into the studio and recorded the single and the rest is history. And it crops up all the time. It was in the last ever episode of Mad Men too, it was a perfect way to end that show and a very proud moment for us too.

Do you get recognised?

It depends on the fan. Strangely enough, I haven’t been recognised in donkey’s years and it happened twice over the last couple of years. Once when I went into Starbucks in London when I was doing the two weeks of Blood Brothers for Bill, and somebody said, “I saw you last night on stage”, which I suppose is an obvious one as they’d only seen me the night before! (laughs) But the other time I was in Staines and I went into Sainsbury’s and I asked the lady behind the till for some stamps, and she said “Are you a singer?” and I said yes and just stood there because that’s the first time that had happened for ages! I came out the shop and said to my husband Alan, “I wish you’d been there, I’ve just been recognised!” (laughs).

Blood Brothers is a very moving show, have you come across any fans that have told you how much it has touched their lives and stayed with them?

I got a letter once from a woman who had a son who was in jail, and she said she sat watching it and it was the only time she’d ever seen anybody portray on stage a jail sequence that is exactly as it is. And she said she cried and cried. So if that’s one example, can you imagine how other people must relate to other parts of it. Everyone’s gone through highs and lows and a lot of what Mrs J’s gone through. And Mrs Lyons. And Mickey and Eddie.

Having known this show for so many years, have you any advice for those who are starring in it for the very first time?

The only thing I would say is that touring with Blood Brothers is like one big family. In all the years I’ve been doing it, it always has been, everyone does everything together and so I would tell them to embrace it, enjoy it and let’s get the camaraderie going that we’ve always had.

So you can boast a pop career, a musical theatre career and you’ve done television too! What have been your highlights so far?

Obviously there are so many, I’ve had a very charmed career. And although I’ve had lots of bad times, I’ve had some incredible highs too. But Blood Brothers has to be the highlight. Not necessarily because of the show, but because of what it led to. Bill took me on just on faith because once I went into Blood Brothers with Bill, he introduced me to my agent, who then put me into Emmerdale. But Mrs J in Blood Brothers is such an iconic role to play, so although it might sound as though I’m crawling here (laughs) it’s changed my life. It gave me a new career. I was going up and down the country doing cabaret and Bill took me away from all that and I’ve never gone back. So why would that not be the biggest thing that has ever happened to me?