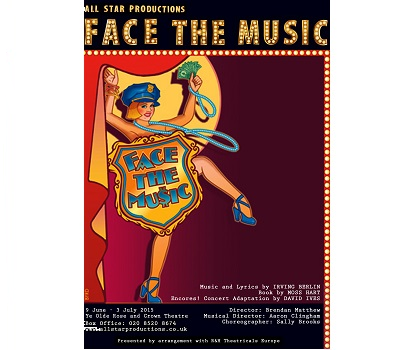 All Star Productions is delighted to present
The UK Stage Premiere of: 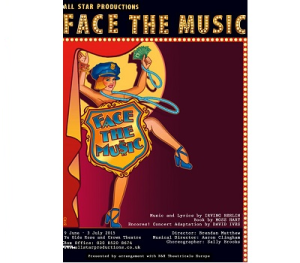 All Star Productions is delighted to Present the first UK Stage Production of Irving Berlin
and Moss Hart’s Musical Comedy FACE THE MUSIC.

The show opened on Broadway on February 17th 1932 playing for 165 performances.
After lying dormant for nearly 70 years, the show was restored with an adaptation by

Producer Hal Reisman desperately seeks backers for his Broadway show. Because of the
Great Depression, once rich investors are “Lunching at the Automat”. In his search,
Reisman meets crooked policemen who need to get rid of their illegal money before they
are found out. The corrupt police chief Martin van Buren Meshbesher and his eccentric
wife Myrtle become investors in the show, expecting it to be a failure. However, when
risqué material is added the show is raided and the government tries to close it and the
flop becomes an instant hit because of the publicity.

With both music and lyrics composed by Irving Berlin (WHITE CHRISTMAS, TOP HAT,
CALL ME MADAM) the snappy musical features such memorable numbers as Let’s Have
Another Cup of Coffee, Soft Lights and Sweet Music, Manhattan Madness, and I Say Its
Spinach (and the Hell with It).
The Creative Team is lead by Director Brendan Matthew and Musical Director Aaron
Clingham, who were both nominated in the Broadway World Awards last year for their
work on All Star Productions production of THE APPLE TREE.

Tuesday – Saturday at 7.30pm;
Sunday at 3.00pm; No performances on Mondays