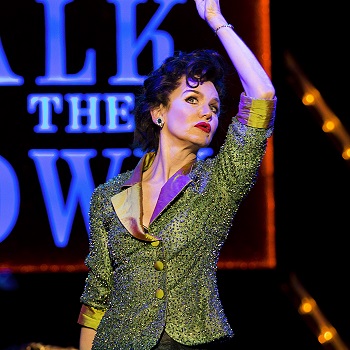 The End of the Rainbow | Review

The troubled life of Judy Garland is well documented – a Hollywood starlet who grew up within the  MGM studio lot and supposedly fed pills by her Mother and the studio bosses to make her slim and go to sleep and wake up at the correct times. These drugs shaped her life and career until her untimely death in London at the age of 47 from an overdose.

Peter Quilter’s play ’The End of the Rainbow’ picks up Garland’s story in the few weeks before her death. Gone are the movie years, the TV shows, the Capitol record deals and the accolades. Garland has now divorced 4 husbands, is in financial difficulty, struggling with her addictions to both drink and drugs which have made her unreliable and given her a bad reputation. She has been booked to star in a six week engagement at London’s prestigious venue ‘The Talk of the Town’, an engagement she hopes will resurrect her career and put her back on track.

Much of the play is set in a hotel suite in London where Garland and Deans are staying. We meet a spirited Judy madly in love with her new fiancé, the much younger ex-nightclub manager Mickey Deans, who she has made her own manager and ‘protector’.  She is keen to get rehearsing and welcomes Anthony Chapman as her accompanist however it doesn’t take long before cracks begin to show, she loses her confidence and is soon demanding pick-me-ups to enable her to carry on. 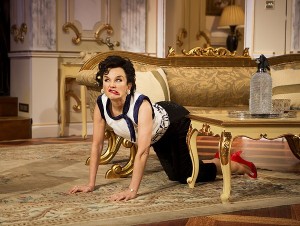 Lisa Maxwell takes on this complex portrayal of Judy Garland with astounding confidence and skill. She is able to balance the exuberance and humourous wit of Garland with her endearing fragility,  dependence on narcotics and her desperate need to be loved. Not only does Maxwell match Garland’s small frame but she has also done her homework as she has Garland’s mannerisms and intonations to a tee, tackling Garland classics head on singing ‘The Man that Got away’ , ‘Come Rain and Come Shine’ and ‘Over the Rainbow’ amongst others with conviction and gusto. An wholly impressive and emphatic performance.

Sam Attwater gives a wonderful performance as Mickey Deans who was to become Garland’s 5th husband. The pair have a volatile relationship often yet Garland relies upon him for total support and motivation. Mickey though sees Garland purely as his meal ticket.  At first you think he is under Garland’s control but as the play unfolds you see how he manipulates her and will stop at nothing to get her to perform.

The voice of reason and symbolising all of Judy’s 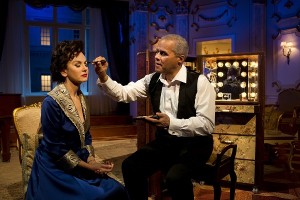 loyal fans is her accompanist Anthony Chapman, brilliantly played by Gary Wilmot. He is the calming influence on Judy and has her best interests at heart. Anthony lovingly offers Judy alternatives to her chosen path of destruction but ultimately Judy Garland’s fate was always sealed as she doesn’t have enough strength within herself to change or to believe in herself.

Unfortunately we know there is not an Emerald City at the end of this road and therefore this is not an easy play to watch for people who want to remember the beautiful MGM star. It shows Judy as a worn out, frail and manipulated woman who is far from perfect and it also features plenty of bad language as well as references to drug and alcohol use. However Maxwell’s portrayal enables you to fall for Garland’s charm all over again and despair at the heartache and loneliness she felt.

The fine performances in The End of The Rainbow are rock solid, make compelling viewing and were definitely worthy of the standing ovations it received last night.

The End of the Rainbow continues to play at the Theatre Royal Brighton until Saturday 2nd April 2016, further dates can be found here.