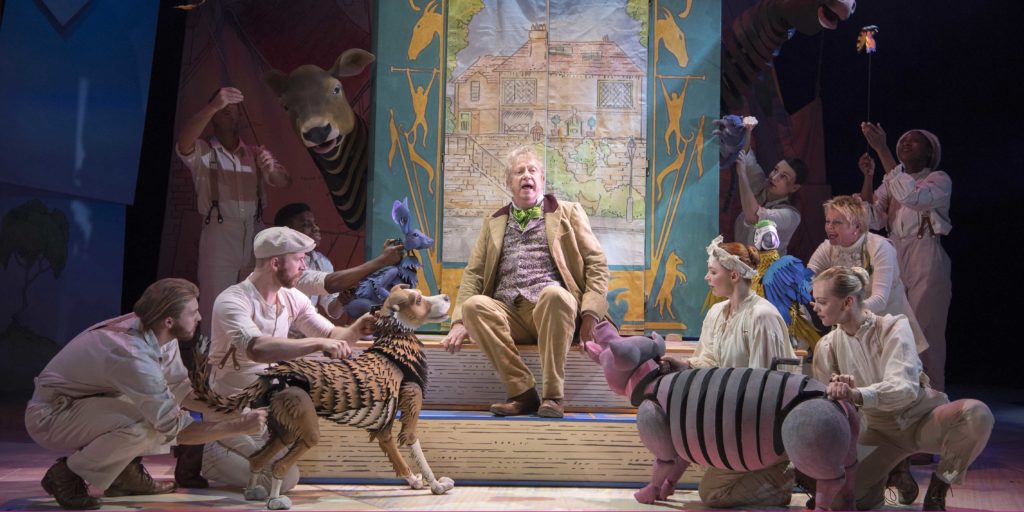 A brand new theatrical version of the acclaimed family musical Dr Dolittle opened last week at the Churchill Theatre in Bromley where it plays until Saturday 24th November before embarking on a nationwide tour.

The opening number invites us into the world of Dr Dolittle, where crocodiles talk and elephants sing, even entering the foyer on gala night confirmed that the world of Dr Dolittle is a magical place to be. The Churchill had pulled out all the stops, balloon arches, silly photo booths and animal face painting gave the evening a wonderful buzz and the presence of the World Wildlife Fund (WWF) firmly puts a stamp on the fact that a love of animals is at the heart of this innovative production.

The multi Oscar-winning movie featuring the songs of Leslie Bricusse and starring Rex Harrison is now, believe it or not, over 50 years old and despite there being another movie made in 1998 (with Eddie Murphy) the show is reflective of the original film and the stories written by Hugh Lofting. Set Designer Tom Piper has embraced this concept and everything has a storybook, childlike feel to it.

Taking the difficult title role is Mark Williams who despite his illustrious acting career has not been in a musical before. His counterpart is Vicky Entwistle who is the voice (and wing) behind Polynesia the parrot.

Dr John Dolittle, a physician who much prefers animals to people is educated by 200-year-old Polynesia how to communicate with animals (in case you don’t know, you do this with a combination of sounds and movements ?). Soon proficient and helped by his two assistants Matthew Mugg played by Patrick Sullivan, and orphanage runaway Tommy Stubbs who on gala night was played by Elliot Morris he soon starts treating animals successfully and is visited by all manner of creatures.

When he falls foul of local magistrate Lady Bellows, Dr Dolittle finds he is unjustly jailed and has to be rescued before he can set off to save the Great Pink Sea Snail a creature who holds the secret to eternal life who is being sought by the evil ‘Poison Arrow’.

The major draw in this production is the ingenious puppetry. The life-size puppets are expertly manipulated, after a while, in the same way as War Horse or The Lion King, you forget about the puppeteers as the animals develop a life and personalities of their own.

Dr Dolittle is heart-warming, fun and has universal appeal. Children will love the puppetry, musical numbers (which are still going around my head) and story. At times the show almost had a pantomime feel to it, with Adele Anderson playing both Lady Bellows and Poison Arrow as an evil comic villain and the appearance of the Great Pink Sea Snail drew a cheer akin to the appearance of Cinderella’s coach. It was magical.

The message is as clear today as it was 50 years ago, treat animals with love and respect, we may not be able to talk to them ourselves but they, like this production bring a lot of joy.

Dr Dolittle runs at The Churchill Theatre Bromley until Saturday 24th November and then embarks on a UK tour.