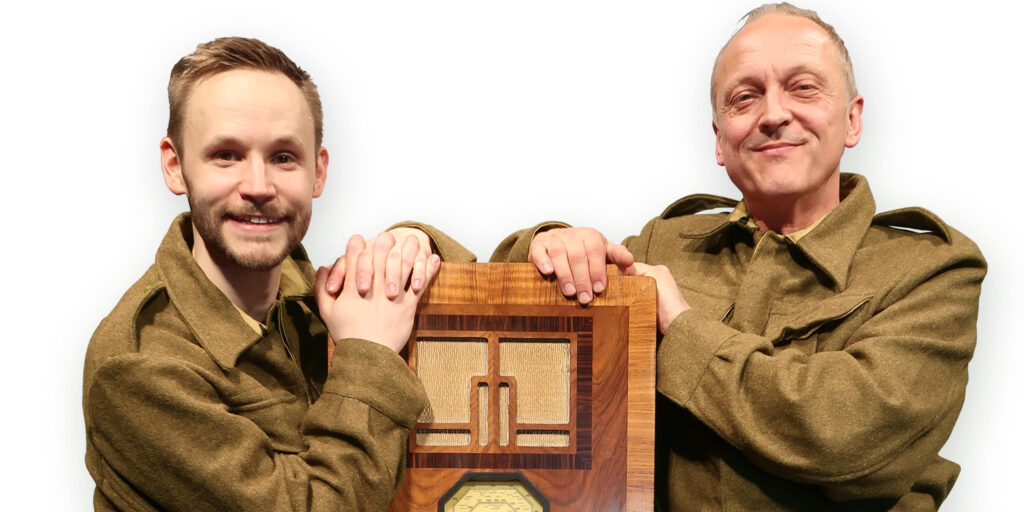 How good to see a theatre close to full once again, and on a week night. And it also demonstrates the affection in which the comedy series Dad’s Army, that ended its run in 1977 but regularly gets repeat audiences of over a million on BBC2, is held.

Born out of the 2017 Edinburgh Festival, the idea is simplicity its self but works an absolute treat. For those early performances, actors David Benson and Jack Lane adapted radio episodes of the show, from scripts by Jimmy Perry and David Croft, for performance on stage but still in a radio studio format; two men, two mics, sound effects and a minimum of props. It needed to be all about the voices, and their impersonations of the characters is masterful.

For this latest tour the format remains the same — if it ain’t broke . . . Benson and Lane have adapted three episodes from the later years of the TV series, including Never Too Old, the show’s farewell in 1977, along with When You’ve Got to Go (in which Pike gets his call-up papers) and My Brother and I, (in which Captain Mainwaring’s drunk of a brother turns up), both from 1975.
The voices are uncanny. Shut your eyes for a moment and you can totally visualise the characters. It seems unfair to single out one example because they all work so well, but I loved David Benson’s John Le Mesurier as Sergeant Wilson, complete with perfect mannerism’s, the vicar (Frank Williams) and Edward Sinclair as jobsworth verger Mr Yeatman, which got some of the biggest laughs of the night.


Jack Lane shares the heavy lifting of the main characters opposite Benson’s Wilson with an absolutely note perfect Captain Mainwaring (Arthur Lowe), and also plays Corporal Jones (Clive Dunn) and Private Pike (Ian Lavender) to perfection. There is a tour-de-force from Lane in the episode My Brother and I that on television featured a dual role for Arthur Lowe as Mainwaring and his drunken brother. So you effectively have Jack Lane as two characters talking to himself, talking to each other . . . something like that. It’s superbly done anyway.


Hopefully the adaptation of the very last episode here doesn’t signal end to David Benson and Jack Lane’s work with Dad’s Army. There is a rich seam of some 80 plus episodes of timeless comedy to be mined and these two pay it a loving tribute.