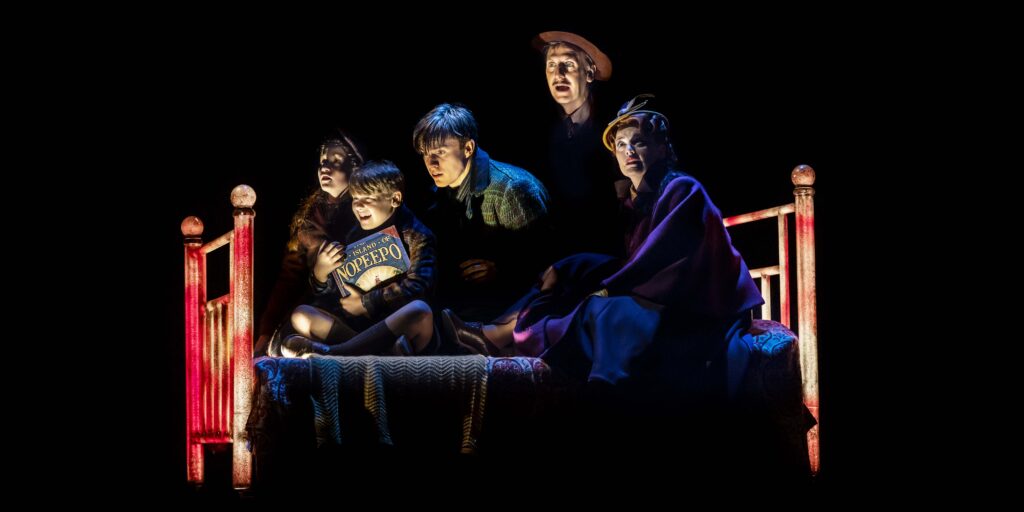 Growing up in the 70s and 80s in the days before mass produced DVDs, streaming services and smart phones, no school holiday was complete without a trip to the cinema to see a rerun of a Disney classic. Originally released in 1971 using a mix of live action and animated effects, Bedknobs and Broomsticks is set in the middle of WW2 and tells the story of an apprentice witch who reluctantly takes in three orphaned evacuateesfrom London. When the children discover her magical powers, they agree to help her complete her training so that she can fulfil her plan to use her witchcraft to defeat the Nazis.

50 years after the film a stage adaptation of Bedknobs and Broomsticks is touring the country until May 2022. Before the show started, I overheard people behind me speculating whether the bed would fly, spoiler: it does. Candice Edmunds co-directs with Jamie Harrison who has an abundance of experience creating illusions in works such as Harry Potter and the Cursed Child and Charlie and the Chocolate Factory. In Bedknobs and Broomsticks there are impressive and well executed special effects; these together with sleight of hand trickery recreate all magic of the film and more.

Originally written in the same era as Mary Poppins and Chitty Chitty Bang Bang, there are marked similarities between the characters of Poppins, Truly Scrumptious and our protagonist Eglantine Price. Not only are they stereotypically written as quintessentially British women but they all have an irrepressible optimistic outlook, these are enhanced further by the scores, all of which were written by the Sherman Brothers. The songs are light, clever and instantly hummable. Additional songs by Neil Bartram have been included into the stage productions of Bedknobs with such care it is hard to believe they weren’t in the original score.

The story, adapted for the stage by Brian Hill brings natural changes due to the challenges of recreating certain elements of the film. The cartoon / live action football match has gone however Hill retains the underwater scene delightfully with illuminated hand-held fish. Overall Bedknobs and Broomsticks the Musical is lovingly faithful to the Disney movie up until an unexpected plot twist that tries to highlight the trauma the children have gone through but ends up questioning the production’s very own tagline ‘It’s time to start believing’.

Dianne Pilkington plays the role of Eglantine Price as a Mary Poppins character rather than the scatty almost frumpy Miss Price that Angela Lansbury played in the movie, and it works. Pilkington looks divine (costume design: Gabriella Slade), sounds amazing and carries the show with confidence, flair and sparkle. She is ‘practically perfect’ in every way. She is supported by Charles Brunton as Professor Emelius Browne and Conor O’Hara as the eldest evacuee Charlie, both characters are played larger than life, including over-the-top cockney accents which would make Dick Van Dyke proud, however a touch more subtlety would have made them more believable and apposite.  Isabella Bucknell and Haydn Court played Charlie’s brother and sister in Eastbourne and did themselves proud.

The rest of the ensemble are kept very busy as all the props, scenery and even some of the characters are hand held and portable and are brought on and off the stage with remarkable speed and efficiency. From clouds to railway station platforms to the stalls in Portabello Road there is so much to see it is hard to know where to look, and no matter how hard you try (and I was close to the front) you cannot see how the illusions are accomplished.

Bedknobs and Broomsticks is a joy to watch, I heartily recommend it for families and nostalgic sentimentalists like me. It is utterly charming and with a few subtle changes could be a truly great show. I still need convincing about that ending though…