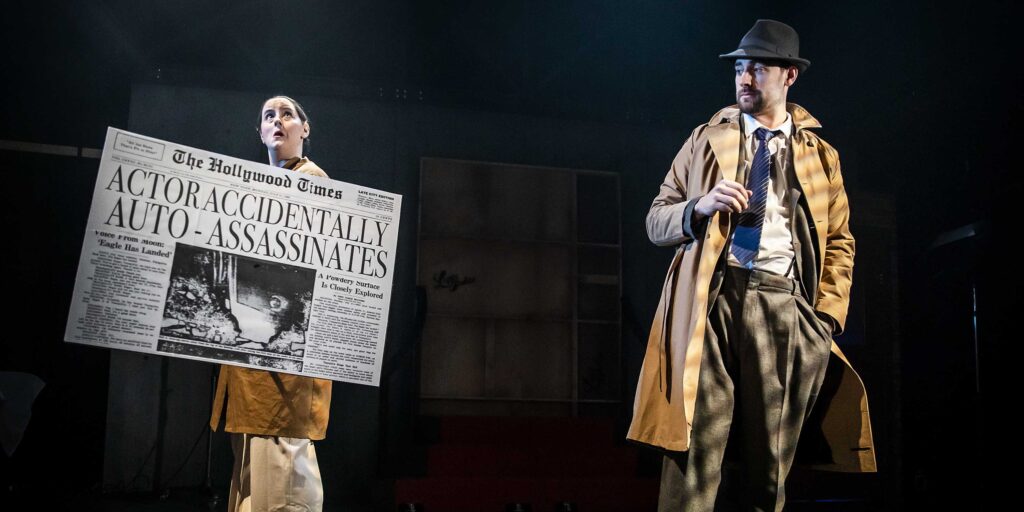 Having been rudely interrupted — like so much of the performing arts — by this virus that you might have heard about, the New Old friends Theatre Company is back on the road with the latest in its wonderfully inventive “Crimes” series. And this one should prove a treat for lovers of film noir.

In 1940s Hollywood a beautiful actress is stabbed during the shooting of her latest movie, Cowboys and Chorus Girls In Space, seemingly by accident. But was it? Enter hardboiled private eye Sam Shakespeare, world weary in the style of Humphrey Bogart, to unravel a web of jealousy, exploitation and conspiracy behind the Tinseltown glamour. He is aided, but mostly hindered, by his decidedly hapless British assistant who seems to be on some sort of work experience scheme.

The four members of the company take on multiple roles in a very funny two hours of dazzling costume changes, clever use of props and some terrific word play. If you love a pun, and who doesn’t, there’s almost too many here to keep up with. OK, you can never have too many.

Writer Feargus Woods Dunlop’s influences are plain to see but none the worse for it; Patrick Barlow’s reworking of The 39 Steps, which ran in the West End for nearly nine years, there are missed lighting and sound cues in the style of The Play That Goes Wrong and Michael Frayn’s Noises Off. There is even a routine of mixed up names that echoes Abbott and Costello’s classic “Who’s on first?” routine.

It doesn’t all land. There are a couple of speeches, particularly as we reached the denouement that slacken the pace but mostly this is a thoroughly enjoyable and affectionate homage to Hollywood’s golden era and a fine example of knockabout theatre.