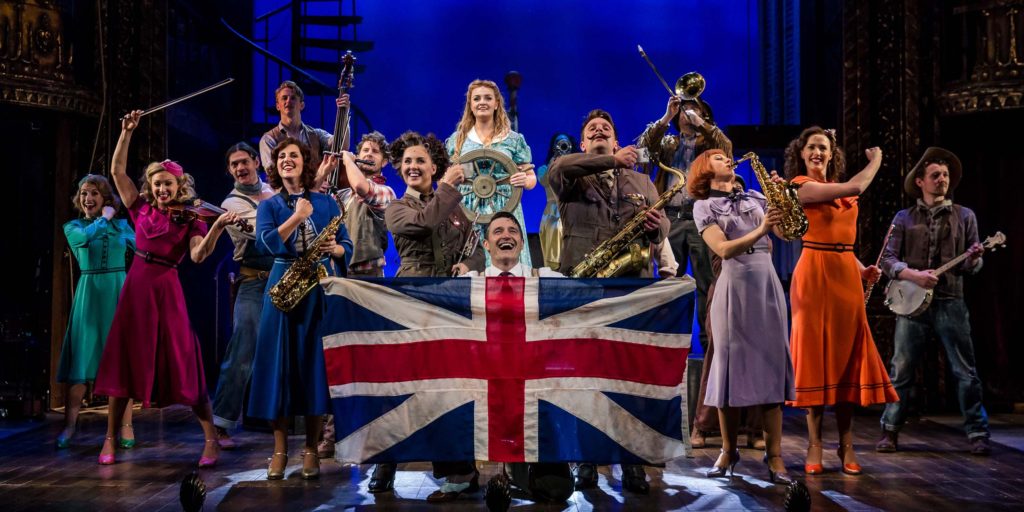 The UK tour of Gershwin musical Crazy for You has reached its Brighton leg from 29 May- 2 June 2018. The famous show was written in 1930, being called Girl Crazy, and as with any musical of that era, the expectations are of the big musical numbers interspersed with a comic confused plot with a romantic twist.  This was the last of the penned Gershwin’s musicals and was written to combat the Depression era with escapism and good old razzamatazz. The show has lavish production numbers, colourful costumes and comic routines from Vaudeville.

Tom Chambers is delightfully charismatic in the lead role of Bobby Child as a New York slightly cheesy hoofing wannabe and reluctant banker who is dominated by the wishes of his overbearing mother played by Kate Milner-Evans. Leaving behind his New York life and long time fiancée Irene, played by Claire Sweeney, he is sent on a mission to foreclose a theatre in an old gold rush mining town, Deadrock, Nevada, but instead falls in love with spirited local girl Polly, superbly played by Charlotte Wakefield.

In order to win her heart, he pretends to be impresario Bela Zangler, played by Neil Ditt,  and offers to save the theatre by putting on a show to raise funds to stop the foreclosure which is contrary to his mission!

If you love an evening of nostalgia, this show delivers with twenty-two memorable numbers including “ Shall We Dance”, “Someone to Watch Over Me”, “I Got Rhythm” and “They Can’t Take that Away from Me”. Tom Chambers is utterly charming and delightfully watchable in the dance routines, he may lack polish but his enthusiasm and smile are infectious and befitting of the role. Charlotte Wakefield as Polly commands the stage, her characterisation is excellent and her vocals are strong and beautifully delivered, it is clear to see that she has a west end pedigree which is sometimes missing in touring productions. Claire Sweeney delights the audience with her performance as the scorned fiancée winning over the heart of the Deadrock hotel owner  Lank Hawkins, played by Christopher Fry, with her sassy, vamped rendition of “Naughty Baby”.

The whole of actor-musician ensemble playing their instruments live on stage plus dancing and singing too are a real delight, they are so talented and enrich with their versatility the famous songs “Slap That Bass” and “I Got Rhythm”.

A wonderful show which is bound to bring a smile to the audience who will leave the auditorium with earworms of those famous tunes.

One thought on “Crazy For You | Theatre Royal Brighton | Review”