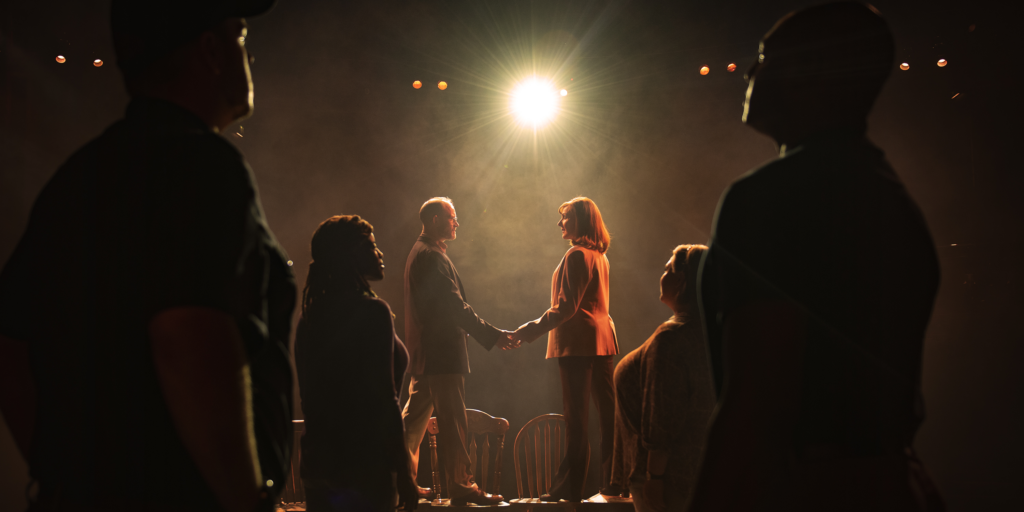 On Monday 28th November I was invited along to the 1,000th performance of the masterful musical Come From Away.

Come From Away is a beautiful musical about how a little town in Newfoundland dealt with 7,000 unexpected visitors during the immediate aftermath of 9/11. The musical had humble beginnings, originating in 2013 as a college production in Ontario; it took Broadway by storm in 2017 and now delights audiences of 1,000 every night at the Phoenix Theatre in the West End.

Come From Away centres around the events that unfolded in the town of Gander, following the 9/11 terrorist attack. When American Airspace closed for the first time in history, 38 planes carrying over 7,000 passengers had to make emergency landings at Gander Airport. Albeit born from a sober source, Come From Away beautifully weaves together stories of hope, faith and human connection.

Each and every character depicted in this musical was a real resident of Gander or a real plane passenger, and the show did a wonderful job of respectfully and meticulously carving out their stories. The townspeople of Gander exuded an inherent feeling of warmth and familiarity. The ‘Plane People’ were presented with an air of mystique and intrigue, which carefully balanced innocence with threat. Experiencing moments alongside the Plane People, such as the first viewing of the 9/11 footage, allowed us a glimpse into the no-doubt real time reactions of TV viewers around the world on that harrowing day, and to share in a moment of silence and pain.

The music and lyrics from Irene Sankoff and David Hein, are superbly strong and adept in conveying the wonderful stories from Gander. However, the storytelling does heavily rely on having a strong cast, all highly skilful in managing a multitude of role types, and accents. It is the adaptive switching between characters that showcases the brilliance of the Come From Away cast. Each actor had at least one Gander townsperson, and one ‘Plane Person’ to play, with transitions between often quicker than a mere second. Whilst these switches could potentially be confusing to new audiences, I found it to be a wonderful way to showcase the cast’s full range of talent, and simultaneously depict that these characters from such different places are all intrinsically connected.

Performances that jumped out to me were that of Jenna Boyd (Beullah; a character you whole-heartedly want to be friends with), Gemma Knight Jones (Hannah; without a doubt the best singing voice of the cast), Harry Morrison (super high energy in each of his portrayals, with perfect comedic timing), and Jennifer Tierney (absolutely nailed the belts in ‘Me and The Sky’). I would also like to spotlight Kate Graham and Robert Hands, who beautifully told the love story of Diane & Nick, and made me fall in love with them too. The whole cast was commendable, and their seamless harmonisation radiated togetherness and warmth. This particular struck me during the song ‘Prayer’, where I felt truly transcended by the beautiful blend of the cast and their angelic harmonisations.

Scenic designer Beowulf Boritt hit the mark with the set design, as does Lighting deisgner Howell Blinkley. Their wonderful rustic stage is simplistic in comparison to the larger shows currently on the West End, but perfectly matches the tone of Come From Away. The backdrop of wooden slats ensures nothing distracts from the cast, but allows for subtly storytelling of its own with lighting poking through the slats illustrating time of day, the gradients projected on conveying mood, and the hatches doubling up as aeroplane doors. At one point I did wonder if projections of landing / rising planes would add visual depth to ‘38 Planes’ or the reprise, but later felt certain this would have detracted from the strong vocals and body language of the cast. The rotating stage is also tastefully used; only revolving during scenes of unsettled emotion, leaving the moments of travel to instead be depicted by the set of chairs. The chairs were pivotal – each chair was different in style and shape yet their cohesion felt natural – perhaps this was a parallel to the characters of the show.

Come From Away wasn’t just a show to watch – it’s an experience to share, and a story to listen to. The strong themes of love, hope and human connection, has you leaving the theatre with much on your mind. Come From Away is a powerful and compelling production, recommendable to anyone (surprisingly child friendly too). I’m very glad I ‘Screeched In’ and will be attempting the ‘Welcome to the Rock’ choreography for a long time to come.

Come From Away… and go to the Phoenix Theatre before it closes in the West End on January 7th or to any theatre lucky enough to host on their 2024 tour!

Come From Away, will launch its first ever tour of the U.K. and Ireland, opening in Leicester in February 2024. Further information on tour venues and dates will be announced soon, however to be first in line for tickets and details, please register interest at comefromawaylondon.co.uk

As previously announced, the London production of Come From Away, which has been seen by more than 850,000 people at the Phoenix Theatre, will end its critically acclaimed engagement on 7 January 2023.

Winner of Best New Musical across the globe, Come From Away shares the incredible real-life story of the 7,000 air passengers from all over the world who were grounded in Canada during the wake of 9/11, and the small Newfoundland community that invited these ‘come from aways’ into their lives.

Experience the joy, heartache and soaring music as the spirited locals and global passengers overcome their fears and a world of cultural differences to come together and forge friendships that will stay with them forever. The first female American Airlines captain, the quick-thinking town mayor, the mother of a New York firefighter and the eager local news reporter are among the many real characters caught at the start of the moment that changed the course of history, and whose stories became a true celebration of hope, humanity and unity.

The international hit musical has celebrated sold-out, record-breaking engagements on Broadway, in Canada, throughout Australia, and on a 60-city North American Tour.

One thought on “Come From Away | Phoenix Theatre | Review”