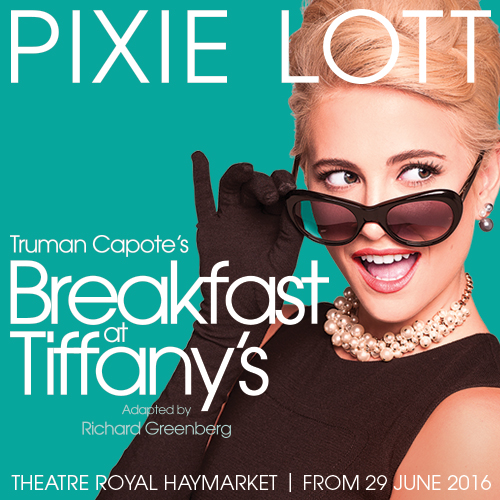 Opening this week at the beautiful Theatre Royal Haymarket, is the long awaited version of Breakfast at Tiffany’s starring successful singer Pixie Lott making her acting debut as beautiful call-girl Holly Golightly, a role immortalised by Audrey Hepburn in the 1961 film.

But you can forget the film, this adaptation by Richard Greenberg goes back to the roots of Truman Capote’s original novella.  The characters are grittier and nothing is understated. Holly’s liaisons are obvious as is her new friend Paul’s sexuality. The ending also reverts to the original which may surprise or disappoint the film’s fans but makes the production interesting to watch. 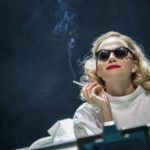 Pixie Lott is a lot more Marilyn Monore than Hepburn (Capote originally wanted Monroe to play the part and never liked Hepburn’s interpretation). The blonde bombshell does very well in her acting debut. She looks gorgeous and proves she can act.

Holly’s neighbour Paul, who becomes her friend and confident and also our narrator is played by Matt Barber (who Downton Abbey fans will know as Atticus Aldridge). Paul is a failed writer who is taken in by Holly’s charm and vulnerability and gets closer to her than many.

Other characters are brought in; Holly’s lovers, best friend, lovesick barman but they are secondary as Lott and Barber are barely off stage and they have to carry the show along, the friendship between Holly and Paul is the core of this story rather than the fascinating life of Holly herself. Unfortunately the build-up of their characters takes far too long and as a result the play drags. By mid way through the second act and things start hotting up, it is too late and I had lost interest. 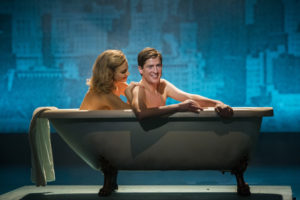 It is a shame because if it was shorter and more to the point it would have been a fascinating piece.

It was refreshing seeing Holly being played differently and yes of course she sings too! Three times in fact as well as ‘Moon River’, we are treated to ‘People Will Say We’re in Love’ and a new number, ‘Dying Day’, by Grant Olding, all sang by her playing the guitar. Here she is at home and sounds beautiful, the songs are largely superfluous to the plot but they make you sit up and listen and break up the monotony.

I was disappointedly underwhelmed by Breakfast at Tiffany’s. Which is a shame.

Breakfast at Tiffany’s is playing at the Theatre Royal Haymarket until 17th September and then it continues on it’s Nationwide tour.