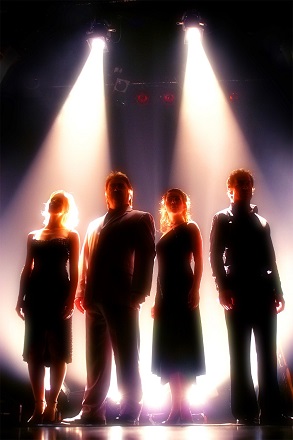 There are plenty of ‘Songs from the Shows’ acts on the circuit, as I see more than the average amount of shows, I didn’t originally plan on going to see Beyond the Barricade a touring production featuring just four performers plus their musicians. However my interest was piqued after interviewing the director and member of the cast Andy Reiss, so I headed over the Hawth Crawley to see the group in action.

Beyond the Barricade | Review

I am so glad I did because it was certainly a night to remember.

The show began with a medley of songs from Miss Saigon. It started with the fast-paced ‘The Heat is On’ and moved subtly into a couple of the slower and more moving numbers. Then followed medleys from Phantom Of The Opera and Wicked before suddenly stepping right back in time with Rebecca Vere singing ‘If I loved you’ from Rodger’s and Hammerstein’s Carousel. This seemed a bold move to make but it paid off, you could hear a pin drop and the man next to me was genuinely moved to tears.

The show was narrated by one of the performers David Fawcett, his introductions to each set of songs were brief, yet informative, with just the right touch humour.

Stepping up a pace now, the ‘Quintet’ from West Side Story was sung by the quartet, and brilliantly so. The first act ended with a compilation of Jukebox musical numbers from We Will Rock You / Jersey Boys and Mamma Mia which I think was a good choice because by the interval the audience were all fired up and wanting more.

The second act was even better than the first. Blood Brothers was first up followed by Evita and this time was my turn to be moved to tears. It is a long time since I have heard songs sung as passionately as this. We didn’t need the backdrop of a Liverpool Council Estate or a balcony, all you needed was to hear Katie Leeming’s emotive ‘Tell me it’s not true’ and ‘Don’t cry for me Argentina’, to realise you were hearing something very special.

There was humour in the second act as well.

Andy Reiss showed us a little of his acting talents as he became the character Seymour from the Little Shop of Horrors and then Fawcett and Vere had the audience laughing uproariously with their rendition of ‘A Song That Goes Like This’ from Spamalot. There was a real buzz in the audience at this point.

Naturally, the quartet ended the show with a medley of songs from the musical that had given them all a common link (read more here), Les Miserablés. You could feel the performers’ genuine love for Les Miserablés as it shone through each song, right up to and including the show’s finale, ‘One Day More’, which the four Beyond the Barricade performers completed with ease even though the song is usually sung by the entire Les Miserablés ensemble.

The beauty of Beyond the Barricade is that it not only to entertain their audience with songs from classic productions but it draws them in, educates and subsequently inspires them to go and see more musical theatre. Personally as a seasoned musical theatre-goer I would like to see a little more variety and hear these incredible performers sing more songs from more modern shows (copyright permitting of course) , Hairspray, Made in Dagenham and the Producers spring to mind, or how about number from the smash hit revival of Gypsy to encourage people to hotfoot it to London and see something new. However, I don’t blame them however for keeping playing safe. The audience were enchanted and frankly so was I.

It was a lovely night out at the theatre and the good news is that Beyond the Barricade is in its 16th year of touring and visits the Hawth and also other theatres in the region regularly. I definitely recommend Beyond the Barricade for an evening of musical theatre treats.

1 thought on “Beyond the Barricade | Tour | Review”