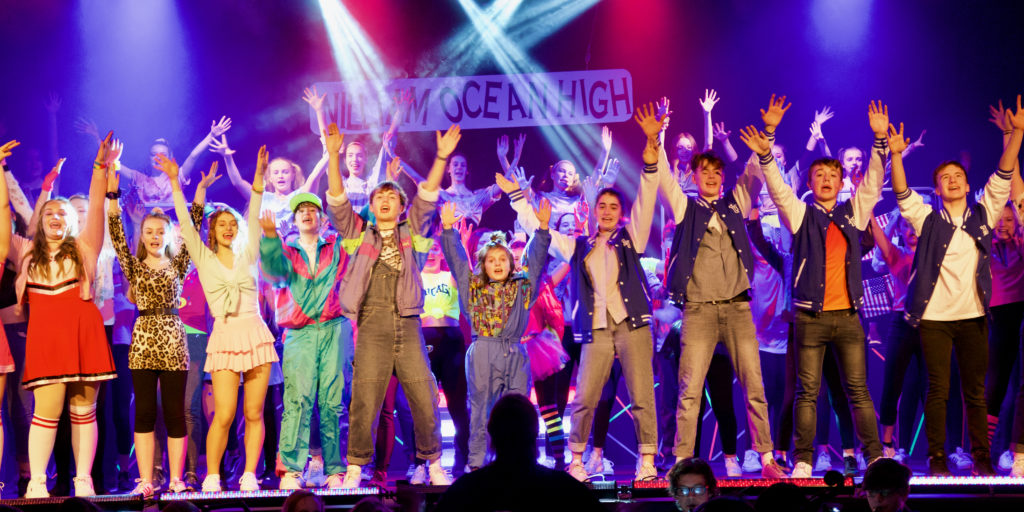 Back to the 80s,
Sackville School
Review

Sackville School raised the roof with its production of Back to the 80s this week, a fabulously nostalgic high school musical featuring many of the infectious chart toppers their own parents would have grown up with.

The evening kicked off with the upbeat scene-setter Kids in America and didn’t pause for breath thereafter.

Olly Howland gave an endearingly wistful performance as the narrator Corey Palmer, looking back fondly at the lives and loves of his classmates at William Ocean High.

Ethan Chapman, playing his youthful student self, was laid back and lovable as he hopelessly pursued Tiffany Houston, “the prettiest girl in the year” played by Juno Phitidis in a sweet performance which captured all the bouncy girl-next-door wholesomeness of her role.

Jack Charlton Nevitt was tall enough, and handsome enough, to play a convincing Michael Feldman, the hottest jock at Ocean High, and a shoo-in for senior school president, prompting a great ensemble performance of the Toni Basil hit Hey Mickey.

And there was a lovely turn too from his VP sidekick Olivia Ody, playing the all-too-obviously Material Girl, Cyndi Gibson.

Grace de Souza was poignant and vulnerable as the cruelly-betrayed new girl Eileen Reagan, while Charlie Stripp – who I last reviewed in his heart-breaking performance as Gavroche in Les Mis – showed his versatility as the comical Alf Bueller, earning several well-deserved laughs.

The dancers shone in their many show-stopping numbers which they performed with precision and pizzazz, while the orchestra – composed of pupils, parents, friends and teachers – delivered a fabulous sound track to the evening which was a credit to themselves, and the school.

Sackville is to be congratulated for a night of unapologetic, good-hearted fun which eventually saw the right guy get the girl – even if it was just at the Prom.

And what could be nicer than that?