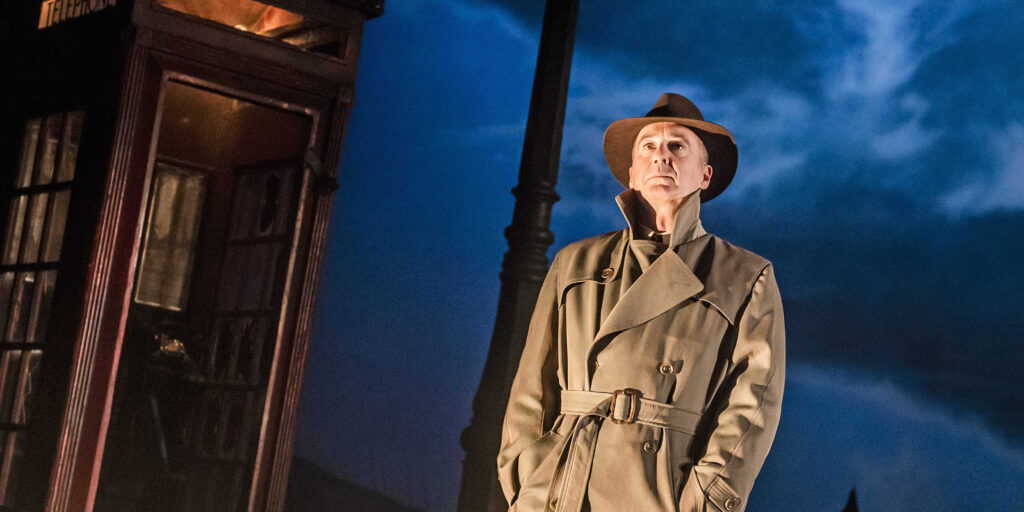 Many of us will be familiar with JB Priestley’s cataclysmic dramatic masterpiece written at the end of the second World War, but set in pre WW1 Edwardian England. It has long been prescribed literature for GCSE students, and remains so, providing huge scope for exploring the myriad of questions the play poses across social history, politics, class and, not least, conscience.

An Inspector Calls is often described as a ‘thriller’, but it is so much more than that, its underlying themes of hypocrisy and despair gradually morphing into something which we, as an audience, are required to interpret, and finally judge for ourselves. The social commentary is always in evidence, however, the disturbing dark element of mystery throughout surrounding the main protagonist, Inspector Goole, builds in suspense to the final scene where the audience is forced to come to its own individual conclusions as to his role and intent.

When Inspector Goole (Liam Brennan) arrives unexpectedly at the wealthy Birling family’s grand house in a fictitious Midlands town, a dinner party celebrating the engagement of the daughter Sheila (Chloe Orrock) to Gerald Croft (Alasdair Buchan) is in full swing. Copious amounts of wine have been taken, and the arrival and subsequent interrogation of every member of the family by the Inspector causes the merry atmosphere to implode when he reveals the reason for his unexpected visit: a young impoverished girl, Eva Smith, has ended her life in an horrific way. Each member of the family’s initial response is succeeded by revelations when every one of them is required to examine their conscience. Priestley gradually conveys the resultant fallout via tense, discomfiting and often shocking discourse.

This bold and daring interpretation of Priestley’s ‘national treasure’ of a play is quite startling to an audience who has seen previous productions set entirely in an opulent Edwardian dining room, with minimal ‘movement’ by the actors. This production is very different. Stephen Daldry’s interpretation of the piece draws together a strong cast including – as well as the above – Jeremy Harmer (Arthur Birling), Christine Kavanagh (Mrs Sybil Birling) and Ryan Saunders as Eric Birling, the feckless son.

The play begins, somewhat enigmatically, with a very young boy with a torch fighting with the curtain, before the set is revealed. He is joined by two other young people who interact with him in a somewhat confusing way. The young boy stays on stage, most of the time at the side of Inspector Goole, however I’m not at all sure why. Neither am I convinced of the role of Edna, (Emma Cater), obviously a servant, who performs a series of actions on the street, throughout the whole play, which don’t appear to be entirely relevant, or which contribute much to the plot. Likewise towards the end, a group of disparate people gather on stage, who remain mute and stationary. There is no doubt that these characters represent the other end of the social scale, however for me they were slightly superfluous, and not necessary to convey anything more than what was already very apparent to any audience member.

Stephen Daldry introduces a slightly surreal element with an elaborate set where the family are enclosed in a ‘house’ on stilts, reminiscent of something from Alice in Wonderland, where the characters have drunk a potion making them all too big. When the curtain at last goes up, the children play on a wet cobbled street below, whilst the family are heard in the house above them emitting sounds of upper class jolly chatter, without us seeing them.

Eventually two of the characters emerge, but the tiny doors and windows of the Wonderland house cause the actors to come across as slightly farcical when they struggle to get through the doors and hang out of the windows.

The rest of the play is performed mainly on the street below and although the special effects of the ‘fog’ and ‘rain’ and the house itself are indeed spectacular, I found this rendition rather disjointed.

Although the cast delivered wonderfully strong performances in what was a brilliant ensemble, this production was not really for me. I found much of the delivery a bit ‘shouty’ and the mystery and somewhat menacing character of Inspector Goole did not come across as much as it should.

Some of the over use of props, plus Sheila Birling’s wedding-style dress complete with increasingly dirty train as it was constantly dragged across the wet cobbles, was distracting.

This was a brave and intentionally radical interpretation of a play whose nature would always be challenging to recreate without altering its original composition. The music by Stephen Warbeck is incredibly powerful, but the set is complex and didn’t really work as well as it should.

For those who have never seen An Inspector Calls before, then it really is a must-see, but following it up and comparing this production with a previous ‘traditional’ one is highly recommended.

1 hour 45 minutes with no interval.