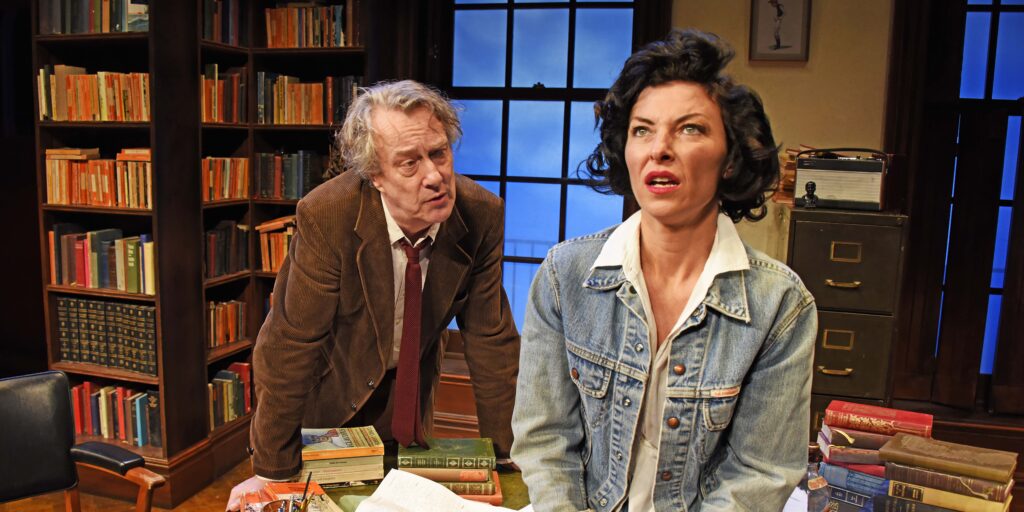 I was unaware that Educating Rita had so many similarities with Willy Russell’s own life and career. The author being a Liverpudlian and a hairdresser before returning to study which is the superficial story line of the show.

I remember the 1983 film with Julie Walters and Michael Caine playing the lead roles as a brilliant film delving deeper into the story line of two characters, Rita and Frank. Brought together as student and teacher, the play explores the relationship between the two as Rita seeks to improve her life through education and with Frank on a path of frustrated self-destruction, seemingly having everything Rita would desire.

Set only in Frank’s University Office, it is admired by Rita as full of books, learning opportunity and inspiring culture and for Frank, it is his sanctuary generally away from students, hiding away not only his own lack of prose but his not so well kept secret of hidden spirit bottles.

Brilliantly, the cast of two, Stephen Tompkinson and Jessica Johnson, captured the audience and held their attention the whole show through. You feel as if you are witnessing the conversations, debates and struggles between the two characters as they happen. There are laugh out loud moments very reflective of the film script and cleverly the incidents that are picturised in the film are well described, especially by Jessica Johnson as she reflects on personal struggles and relationship changes during her journey and pursuit of education and culture.

If you liked the film you will enjoy this Max Roberts directed tour of Educating Rita, celebrating 40 years of the play, now showing at the beautiful Devonshire Theatre, Eastbourne  Monday 17–Saturday 22 February