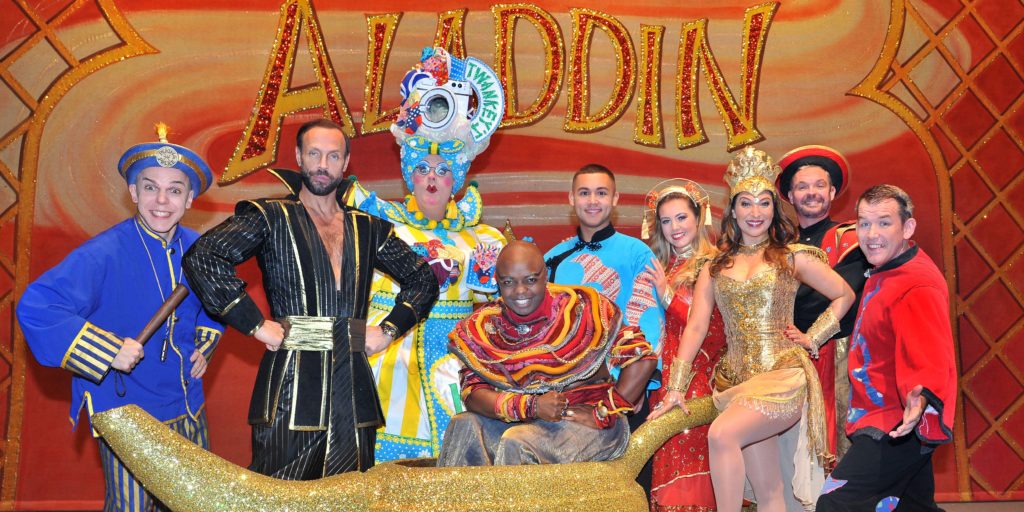 For the last five years, Evolution Pantomimes have been wowing audiences each Christmas at the Hawth Theatre in Crawley, this year with Aladdin they are doing it once again. An age-old story together with Evolution magic of fabulously dazzling costumes, lavish and colourful sets, the corniest of jokes and great song and dance numbers ensure a delightful few hours entertainment suitable for the whole family.

Dancing on Ice judge Jason Gardiner headlines this year as the evil Abanazar, he opens the show by telling the audience about his dastardly plan to rule the world (and become a great Shakespearian actor?) for this he has to enlist the help old a young man called Aladdin who is played by Eastenders and BGT star Shaheen Jafargholi.

Another BGT star, impressionist Jess Robinson plays a sassy Genie of the Ring entertaining the audience with her excellent impersonations and comic timing. She also impresses us with her singing voice particularly, when joined in a duet by Genie of the Lamp Nathaniel Morrison.

Billed as ‘Crawley favourite’ Michael J Batchelor returns again to the Hawth as the bloke in the frock and it would be hard to imagine a Crawley Christmas pantomime without him. As Widow Twanky this year, he surpasses himself, his costumes designed, and in many cases actually made by himself were hilariously brilliant. Every time he comes on stage he is dressed in another inspired creation, from a panda covered gown to a Ming vase to a Chrismas Bauble, his costumes are exquisite.

As always, it is comedy gold With Batchelor and even more so when he is joined by Ian Jones playing his son Wishee Washee and Richard Franks as PC Pongo. Complicated gags involving lots of alliteration, and visual humour are plentiful, the highlight being an alternative version of the twelve days of Christmas involving a lot of custard pies and a soggy slippery stage.

The musical numbers are of high quality this year. Songs from musicals from stage and screen as well as pop songs (and a snippet of baby shark) were cleverly interwoven into the story. Many of this year’s cast have strong singing voices. It is not often the villain in a pantomime gets a ballad to sing but Jason Gardiner’s version of This is the Moment was lovely, Upbeat numbers included George Ezra’s Paradise and songs from La La Land, Legally Blonde and Wicked to name just a few.

Choreography by Simon Hardwick is slick and fun to watch and although was disappointing that Jason Gardiner wasn’t given more chance to strut his stuff it is always wonderful to see children from local dance school being given t chance to shine amongst the professional performers.

Overall this is another Evolution success. It has all the elements a pantomime should, fun slapstick, romance and adventure. I cannot wait for Dick Whittington next year!