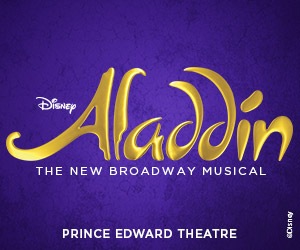 The name ‘Disney’ is constantly linked to the word magic; Tinkerbell, good Fairies, numerous evil queens even Mickey himself dabbled a little in The Sorcerer’s Apprentice, now more Disney Magic is set to astound audiences when Aladdin opens at the Prince Edward Theatre in London in May.

Put ‘Aladdin’ into the Search Engine of Theatre South East and numerous productions of that name will turn up, but this will be no pantomime, produced by Disney Theatrical Group it will be a spectacularly colourful and grandiose production of magnificent proportions.

Even the press launch of Aladdin was an experience in itself. Set on the stage of the Lyceum Theatre where Disney have staged ‘The Lion King’ for the last 17 years, member of the press were given seated on themed purple and gold chairs, given a glossy press pack and served bubbly and canapés surrounded by sumptuous artwork and intricate costumes. No photographs were permitted so you will just have to take my word for it.

The list is impressive, not only does it include The Lion King but also Beauty and the Beast, Mary Poppins and Shakespeare in Love not to mention shows that haven’t made it over the pond yet Tarzan, Aida, The Little Mermaid and Peter and the Starcatcher. Their catalogue is impressive, sugar coated and what dreams are made of.

It is with great excitement that Thomas expands on America’s latest export, Aladdin. It was one of Disney’s most successful films, the highest grossing film of 1992 and the stage show has been a huge success on Broadway for over a year. Songs written by Alan Menken and Howard Ashmen, (and Tim Rice following Ashmen’s death) that graced the movie will appear in the stage production but Schumacher stresses that this isn’t ‘just another film being made into a musical’, the music and lyrics were integral to the film and are within the DNA of every Disney production and therefore are a vital ingredient to the show.

To prove the point, Dean John-Wilson (currently in Miss Atomic Bomb) and Jade Ewen (In the Heights) are brought to the stage.  They have been cast as Aladdin and the Princess Jasmine respectively and delighted the press by singing the show’s most popular number ‘A Whole New World’ and although we were told that Dean and Jade had only sung the number a couple of times previously, it was sublime, I cannot wait to see them sing it while they soaring tumbling and freewheeling on their magic carpet ride!

Several more songs have been added to the score, some of which were cut out of the original film due to time constraints and others have been written specifically for the musical including a song sung by Aladdin called ‘Proud of Your Boy’. Schumacher admits to being very fond of this addition saying that the song represents Aladdin’s vulnerability and his basic desire to do good and make his Mother proud.

But what about the Genie, I hear you ask? Does Disney try and recreate the innate zaniness of the late Robin Williams? No, but the Genie is no less impressive, he is to be played by Trevor Dion Nicholas who joins the London cast direct from the Broadway production. He enters and sings ‘A Friend Like Me’ in a jazz-hot, razzamatazz, Cab Calloway kind of way and the whole song is given new life and the effect is utterly fantastic. If that wasn’t enough we are then told that when the show opens, the Genie’s song will be accompanied by special effects, lots of dancers and will be very spectacular. It was anyway.

Bob Crowley (set designer) took us through some of the marvellous sets that we are expected to see in the London production and immediately you are struck by the vibrant colour and exciting backdrop. The special effects promise to fill us with childlike wonder and delight!

More impressive facts and figures involved the costumes. They are designed and made with immense precision from authentic fabrics from around the world and the detail is astounding. On just one costume which was on display there were 17,000 Swarovski crystals individually sewn on.   I didn’t count them but the number looked about right.

Disney Theatricals are all set to wow audiences this spring with this amazing production of Aladdin. It will be a wonderful production for the whole family. It promises to be absolutely spectacular and truly magical and I for one cannot wait to be transported into the colourful and vibrant world of Arabian Nights!