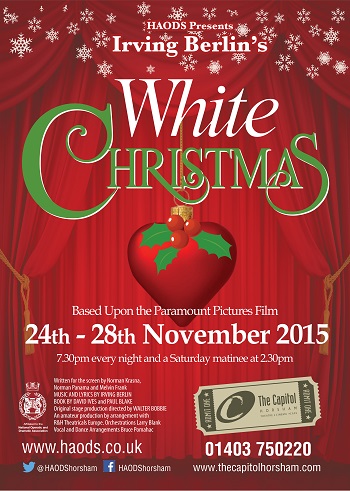 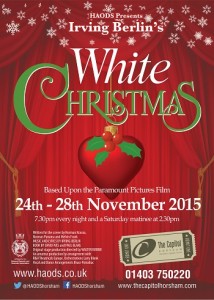 Nights are drawing in and the weather is cold. Is it too early to think about Christmas yet? Not if you are going to see Irving Berlin’s White Christmas at the Capitol Theatre in Horsham this week performed by the Horsham Amateur Operatic and Dramatic Society (HAODS).

The 1954 film starring Bing Crosby and Danny Kaye is standard watching on the TV each December, but now the classic musical has been adapted for the stage by David Ives and Paul Blake. The HAODS production is directed by Stacey James and is being performed until Saturday.

White Christmas tells the heart-warming tale of two ex-army pals Bob Wallace (played by Kevin Summers) and Phil Davis (Martin Bracewell) and sisters Judy and Betty Haynes (Alicia Marson & Rachel Farrant respectively) who all travel to a hotel in Vermont at Christmas to find that it is owned by the retired General of Bob and Phil’s former Battalion. The hotel is in serious financial difficulties, which is not helped by a distinct lack of snow which makes the success of the coming holiday season hang in the balance.

The solution? What better than to bring an entire troupe of performers to Vermont to put on a show and invite their old Battalion not only to save the hotel but also to give the General a boost! Along the way there is naturally love and romance but true love doesn’t run smooth as Phil’s flirting causes jealous friction with Betty and through a misunderstanding Judy suspects that Bob is up to no good.

There are several standout performances, many from the supporting players; General Waverley is played by long serving member of HAODS Howard Collis, playing the role of the General with just the right mix of amount of authority and warmth, his granddaughter is played by Emily Faulkner (sharing the role with Ellie Attfield) who stopped the show last night when she sang the reprise of ‘Let me Sing and I’ll Be Happy’. The song had already been brilliantly sung in the first half by Tess Kennedy who was just perfect as the hotel concierge Martha Watson.

Expect to revel in nostalgia as MD Neil Franks and his live orchestra treat you to many of the original Irving Berlin numbers from the film including Sisters, Count Your Blessings (Instead of Sheep), and of course the legendary White Christmas coupled with other Berlin classics that have been added to the score making the musical more suitable for the stage, giving choreographer Stephanie O’Connell plenty of opportunity to stage some big chorus numbers.

White Christmas is a feel-good show oozing with patriotism, schmaltz and sentimentality and completely suitable for the whole family so an easy choice if you are not overly keen on pantomime yet would like a bit of a winter warmer this Christmas.

White Christmas is running at the Capitol Horsham until Saturday 28th November.

Watch out for HAODS next production ‘The Pyjama Game’ in April.