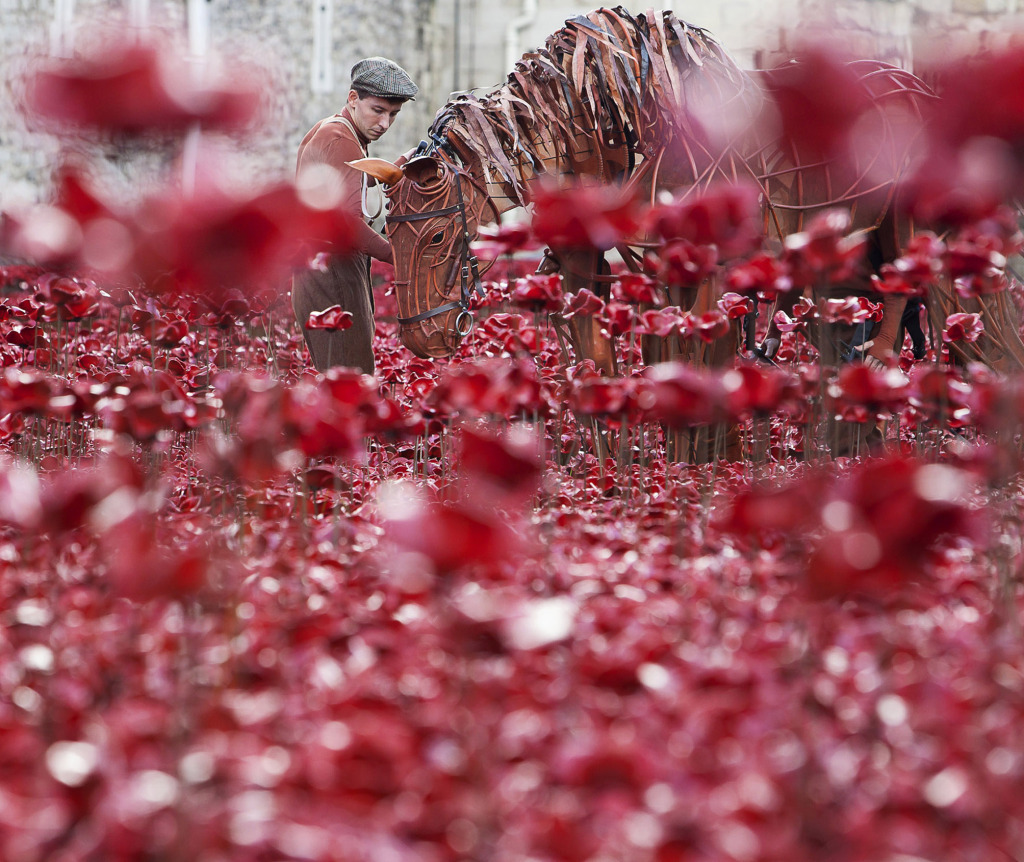 AT THE TOWER OF LONDON POPPIES

Yesterday (Sunday 19 October 2014), best-selling author Michael Morpurgo was joined by Joey, the life-size horse puppet and star of the National Theatre’s production of War Horse visiting the poppies installation at the Tower of London.  Joey walked amongst the poppies and Michael Morpurgo planted a poppy and then returned to read the Roll of Honour.  The puppeteers were Sam Clark (Joey Head), Robin Guiver (Joey Heart) and Derek Arnold (Joey Hind).

Blood Swept Lands and Seas of Red is a major art installation at the Tower of London, marking one hundred years since the first full day of Britain’s involvement in the First World War. Created by ceramic artist Paul Cummins, with setting by stage designer Tom Piper, 888,246 ceramic poppies will progressively fill the Tower’s famous moat over the summer. Each poppy represents a British military fatality during the war. Each of the poppies is available to buy online for £25 (+p&p) with 10% of profits and all net proceeds being donated to six service charities. 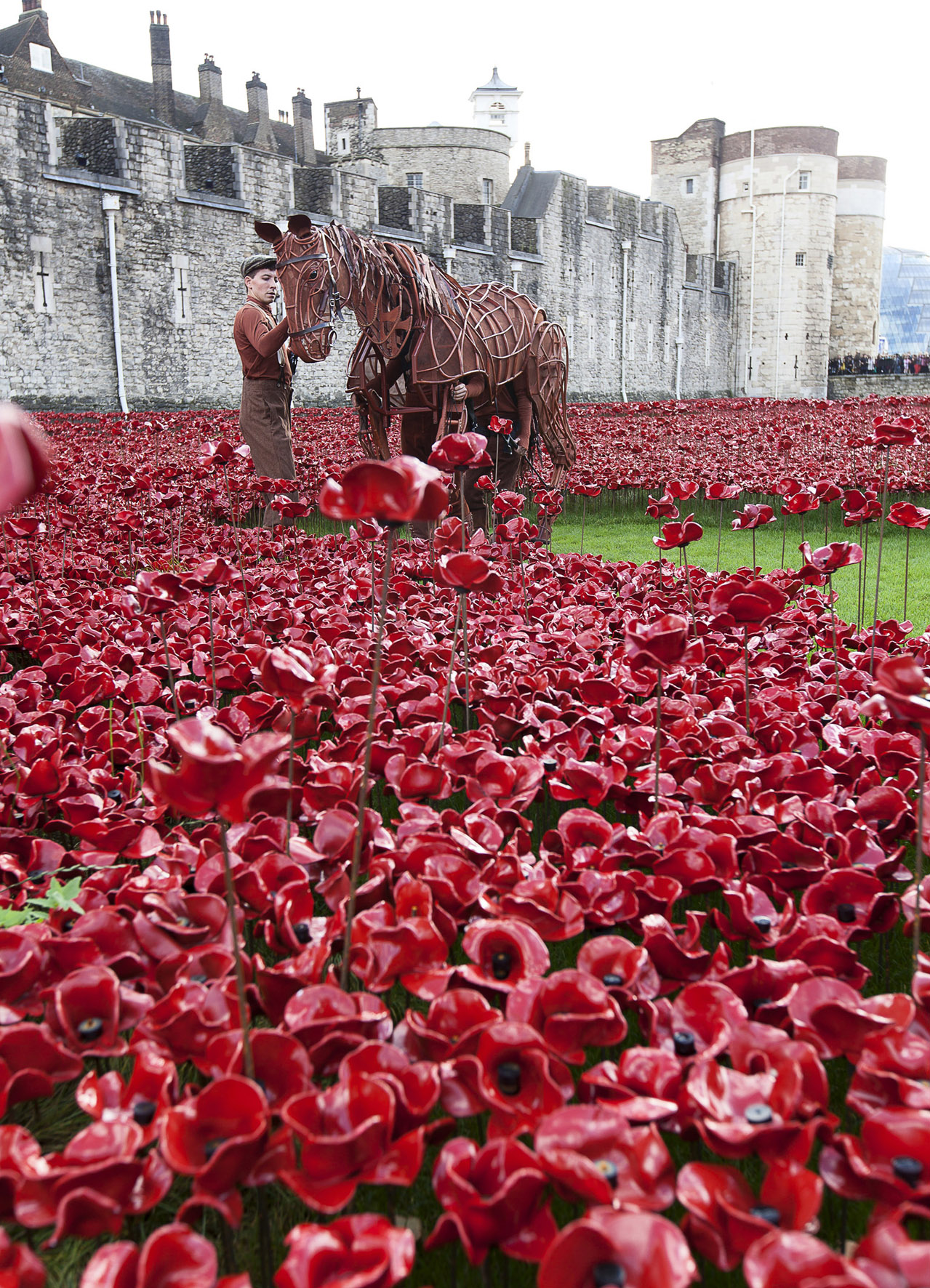 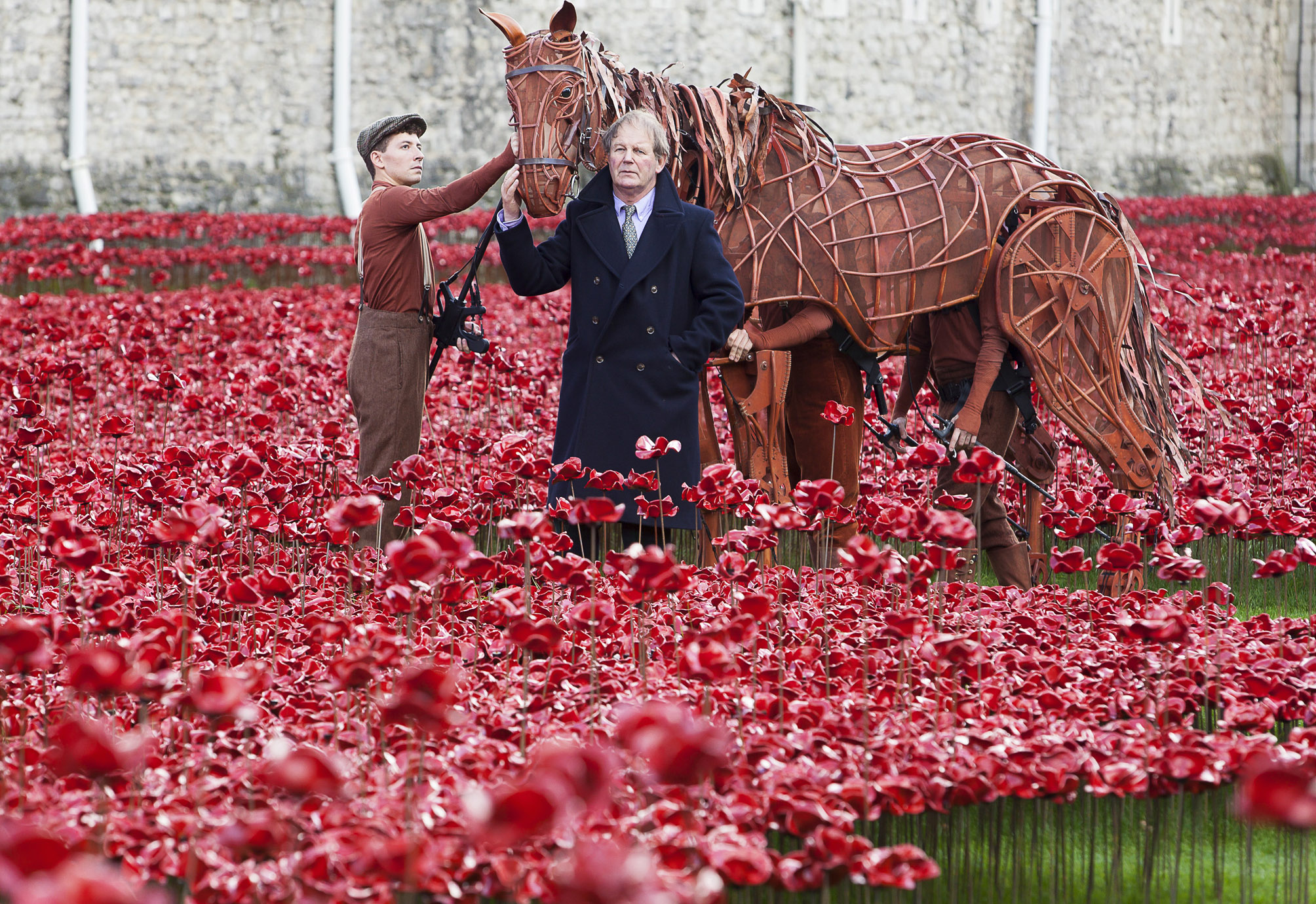 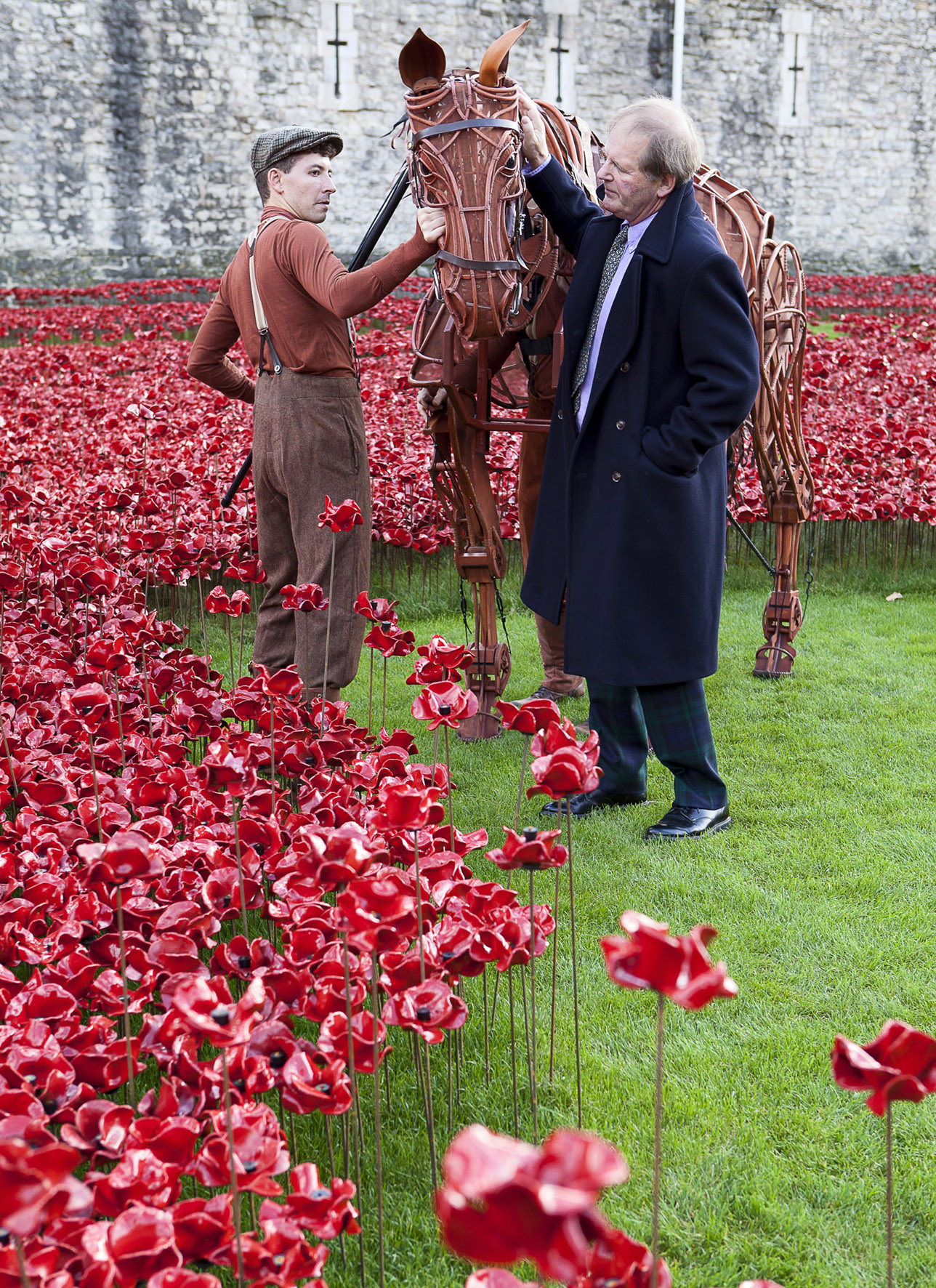 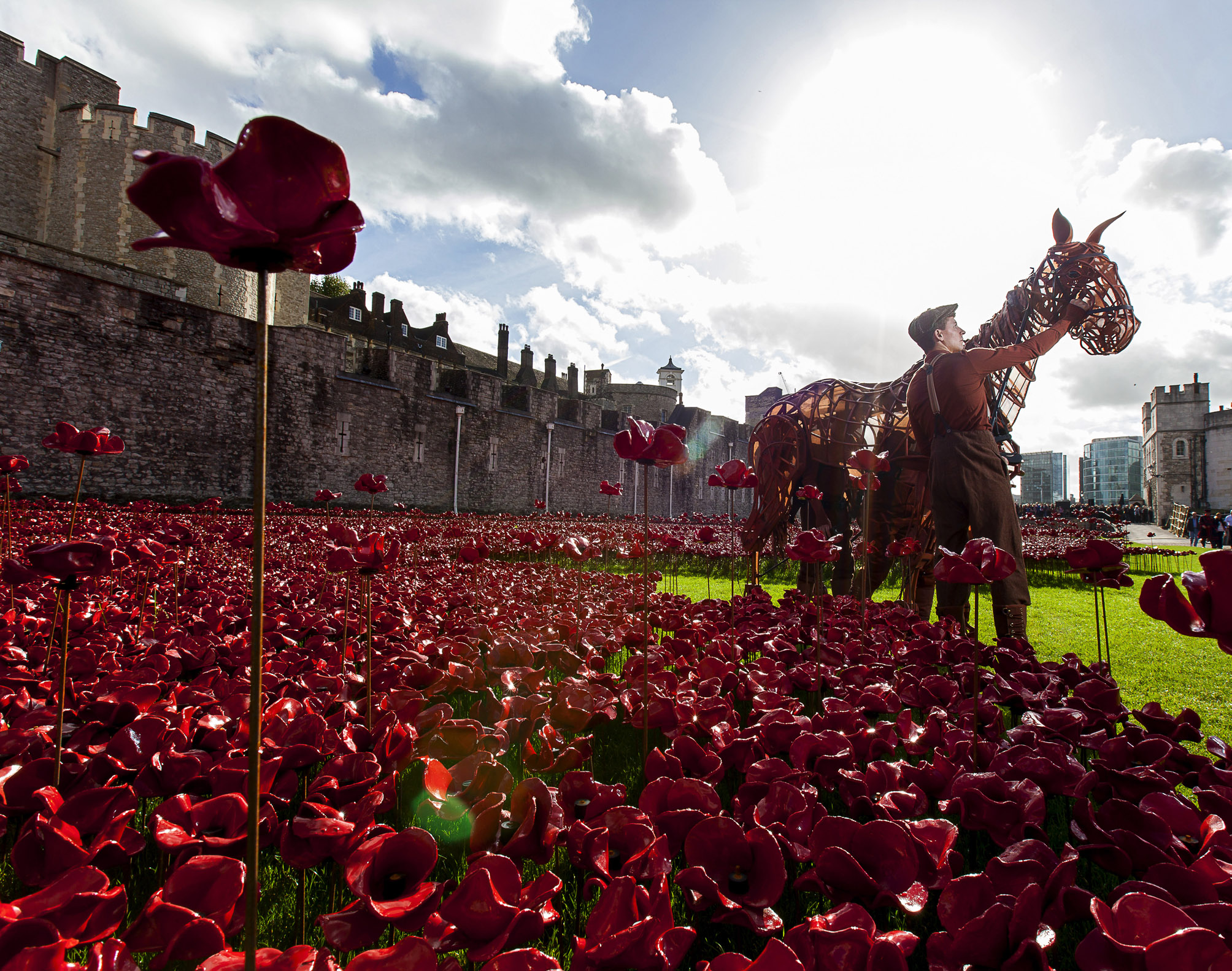 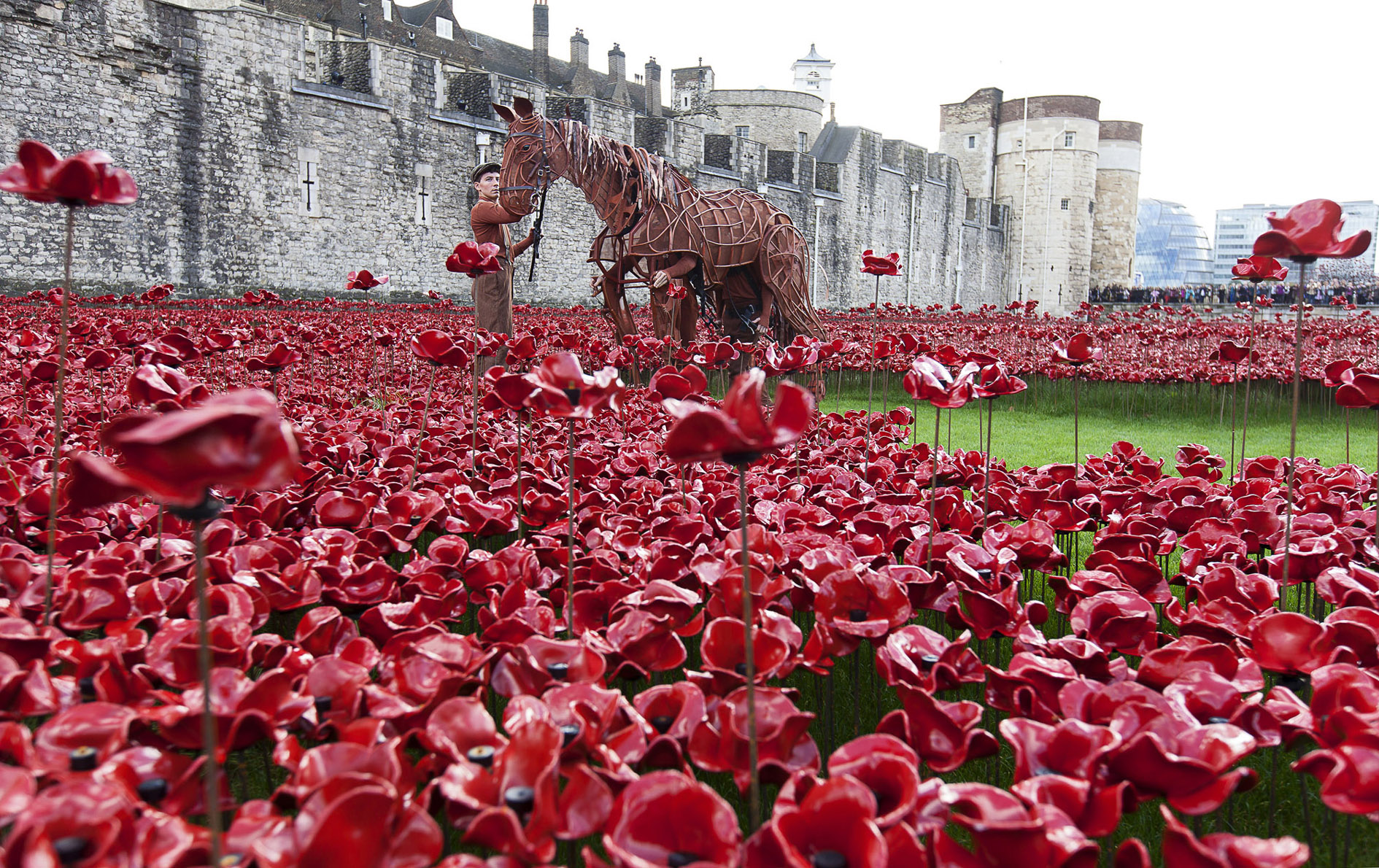 Throughout the installation period (until 11 November 2015) at twilight, the public will be able to witness from Tower Hill terrace the names of 180 serving military killed during the First World War being read out in a roll of honour. This will be followed by the ‘Last Post’ bugle call played by a single bugler. Members of the public can nominate a name for the roll of honour using a weekly ‘first come, first served’ nomination system which will allow those with the relevant information to put a name forward for the roll of honour to be read the following week.

War Horse is the powerful story of a young boy called Albert and his beloved horse, Joey, who has been requisitioned to fight for the British in World War I. Caught in enemy crossfire, Joey ends up serving on both sides during the war before landing in No Man’s Land, while Albert, not old enough to enlist, embarks on a treacherous mission to find his horse and bring him home.  A remarkable tale of courage, loyalty and friendship, War Horse features ground-breaking puppetry work by South Africa’s Handspring Puppet Company, which brings breathing and galloping horses to life on stage.

War Horse has been seen by over 6 million people worldwide since its premiere at the National Theatre in 2007 and continues its hugely successful run at the New London Theatre in the West End.  A major tour of the production is about to embark on a visit to Johannesburg and Cape Town in South Africa, before it comes back to the UK for a run in Bristol in January and February 2015.

Based on a novel by Michael Morpurgo, War Horse is adapted by Nick Stafford and presented in association with Handspring Puppet Company.  Directed by Marianne Elliott and Tom Morris, it is designed by Rae Smith, lighting is by Paule Constable and movement and horse choreography by Toby Sedgwick. The puppetry directors are Basil Jones and Adrian Kohler, with video design by 59 Productions Ltd, song-making by John Tams, music by Adrian Sutton and sound by Christopher Shutt.

For more information on Blood Swept Lands and Seas of Red at the Tower of London, please visit www.poppies.hrp.org.uk