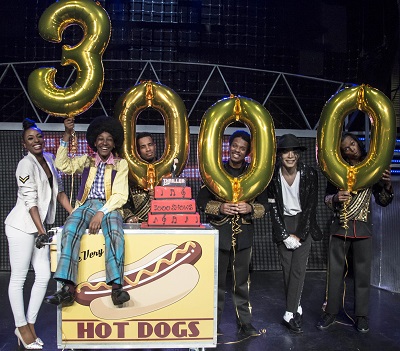 3,000 performances in the West End is nothing to be sniffed at, and by the standing ovation it received I think it shall be running for sometime to come 😀 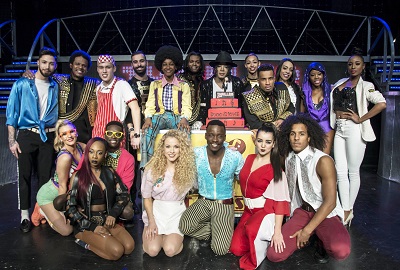 The cast of Thriller Live celebrated in style last night as  the show marked its 3,000th performance in the West End with a spectacular cake and an American-themed party at Planet Hollywood.

Thriller Live opened to critical acclaim at the Lyric Theatre in the West End on January 26, 2009 and this week played its 3,000th record-breaking performance there!

The cast and creative team celebrated the news with a 3-tier cake topped with a figure of Michael Jackson himself.

Producers Paul Walden & Derek Nicol said: “We are thrilled that Thriller Livecontinues to rock the West End, delighting audiences of all nationalitites in its 8th record-breaking year at the Lyric Theatre.”

Thriller Live is unlike other West End musicals. There is no script or story, it is instead a eye-popping spectacular concert celebration of Michael Jackson’s music and dance legacy, bringing to life on stage his distinctive high-energy dancing and the pulsating sound of many of pop’s greatest hits. The show changes each year with new numbers added, and features specially created video footage and effects and dazzling choreography by the show’s award-winning director, Gary Lloyd. 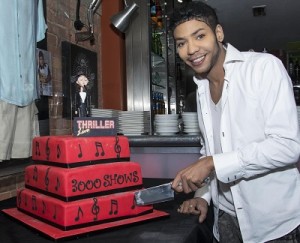 Thriller Live recently passed Tim Rice and Andrew Lloyd Webber’s Evita, which opened in 1978, to become the 17th Longest Running West End Musical of all time. It has now been been seen by over three million people worldwide and is currently touring the UK.

Thriller Live has taken more than $150million at the global box office and continues to set and break records and visit new territories. To date it has now performed to standing ovations in 32 countries from South Korea to Norway, and South America to China.

In London, Thriller Live is also the longest-running production in the Lyric Theatre’s 125-year history. It  moonwalked into the West End after three acclaimed UK tours. When Michael Jackson died, the Lyric became a focus for fans from all over the world, who created a massive shrine of flowers, candles, and tributes.

Thriller Live is  produced by Paul Walden and Derek Nicol for Flying Music in association with Adrian Grant for Key Concerts.