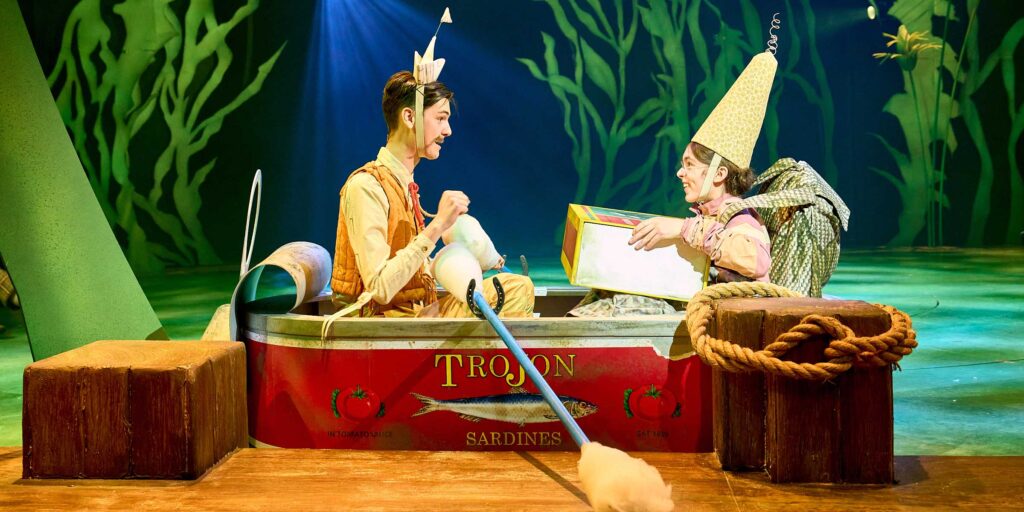 The Wind in the Willows

The Christmas holidays has got off to a terrific start with Chichester Theatre’s critically acclaimed Youth Theatre performing Alan Bennett’s adaptation of the classic tale Wind in the Willows.  This family show once again has Director Dale Rooks at the helm with Simon Higlett (Set Designer) and Ryan Dawson Laight (Costume Designer) creating the visual imagery for this enchanting adventure.

Beginning with Mole deciding on a day off and forsaking the spring cleaning, he ventures out onto the riverbank where Ratty entices him onto the river and a whole new world opens up for the endearing and naïve Mole.  Flamboyant, speed-crazed Toad invites them on a trip in his horse drawn caravan but disaster strikes and they end up in the ditch!  More exploits follow, into the Wild Wood, skirmishes with the weasels and a night at Badger’s abode.  Toad’s exploits and love of cars land him with a prison sentence but a daring escape impersonating a washerwoman see him and his friends conquer the invasion of Toad Hall by the sinister and wily weasels, ferrets, foxes and crows finally restoring it to it’s rightful owner.

Great credit goes to all 65 youngsters who bring this delightful tale to life with such stylish dancing and enchanting vocals.  Special mention for Francesca McBride playing the Magistrate, Lucy Campell as both Mother Otter and the Goaler’s daughter and Milly Frymann (barge woman) who excelled with her powerful solo.  The skilful principal characters were a joy to watch.  Spencer Dixon confidently played the polite, sensible Ratty with his penchant for grammar and Milena Harrison who enchanted with the vulnerable innocence and delight that Moley feels in encountering the wider world.  However, Jack Keane as the flamboyant, excitable and irresponsible Toad was a delight.  His marvellous mannerisms, enthusiasm and frog-like movements were a breath of fresh air, adding to his masterfully animated performance.

This accomplished and talented young company bring the year to a close with this highly recommended colourful and charming world of the riverbank.