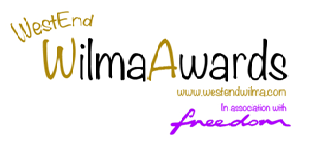 Guests will be treated to Afternoon Tea with Wilma (courtesy of The Full English) while they watch the winners be revealed and listen to some very special live performances!
“People have been telling me for years that I should do The Wilma Awards but I wanted to wait until I felt the time was right. If I’m going to do something in life, I’m going to do it properly! And if there’s one thing I know how to do it’s throw a good party!” – West End Wilma

West End Wilma and her team of reviewers will shortlist the nominees in each category from their combined opinions on the past 12 months of Theatre. Those shortlisted will then be put to the public vote to decide on the winners.

Public voting will open on 1 October 2014 and run for two weeks at westendwilma.com

”There are some great Theatre Awards out there already with the Oliviers, Whats On Stage and Off West End Awards but I wanted to bring my own little list of awards to life for some categories that I feel maybe don’t get recognised in other awards.” – West End Wilma

About West End Wilma
West End Wilma is everyone’s favourite nana in the Theatre world. Running around the West End interviewing stars, reviewing shows and blogging about theatre at www.westendwilma.com. Earlier this year Wilma was voted Ticketmaster’s Theatre Blog of the Year 2014 and has been included in Lastminute.com‘s top ten blogs for two years in a row.

About Tim McArthur (host)
Tim is an established Actor, Director and Presenter having most recently directed and starred in Bathhouse the Musical at Above the Stag Theatre. This Autumn Tim will be directing a new production of Into the Woods at Ye Olde Rose and Crown and recently directed the UK tour of Four Poofs and a Piano. Tim hosts the annual West End Eurovision red carpet event and presents Theatre radio shows including The Curtain Up Show and Jemm 3. Follow Tim on Twitter @Tim_McArthur

For all the latest information on the 2014 Wilma Awards Follow:

As someone who loves a good theatre awards show I was absolutely delighted to hear that West End Wilma is going to host her own this year, called ‘The Wilma Awards’. West End Wilma is one of the most popular theatre blogsites around and it has a mountain of theatre information, reviews, interviews and continues to go from strength to strength.

I love her choice of categories, not as high-brow as other award ceremonies but yet all important, she is still looking for more companies to sponsor the awards so if you can help please get in touch.

On October 1st join me in voting for your favourites 🙂

It promises to be a great afternoon, I hope there will be live tweeting from the event.