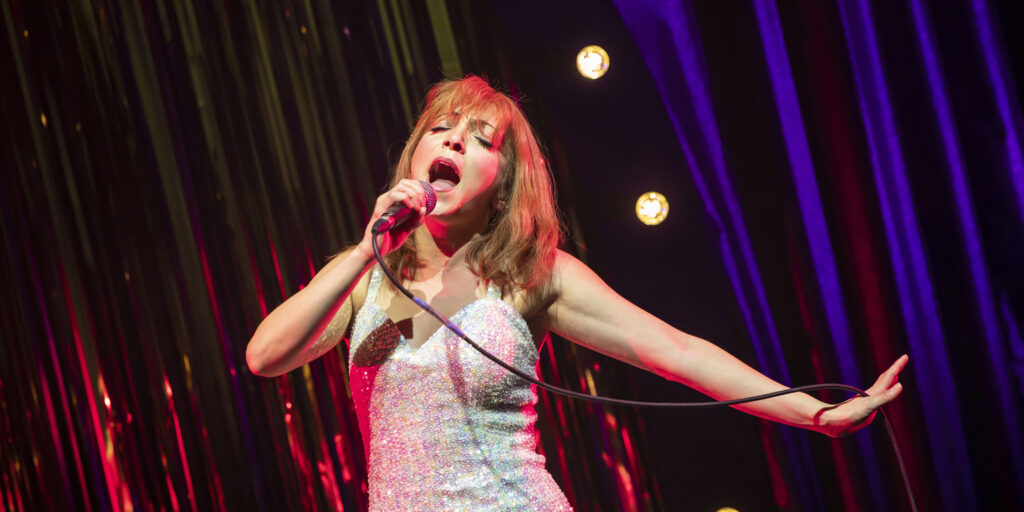 The Rise and Fall of Little Voice

The Rise and Fall of Little Voice premiered at the National Theatre in 1992 before transferring to the Aldwych Theatre in the West End, winning both the Olivier award and Evening standard award for Best Comedy. It was supposedly written for its star Jane Horrocks after writer Jim Cartwright heard her sing impressions of Hollywood greats. Horrocks then went on to more critical acclaim when the story was made into a film where she co-starred with a star studded cast. A new tour of the show is currently touring the U.K. and is currently playing at the Theatre Royal Brighton.

Little Voice (LV) is a painfully shy introverted young woman who lives in the shadow of her brassy, flirtatious, larger and louder than life mother. She consoles herself with the music albums left to her by her late father and mimicking the famous voices of Garland, Merman, Streisand and the like. When her talent is ‘discovered’ by her Mother’s latest flame Ray Say (Ian Kelsey) a wannabe talent agent the situation for LV spirals uncontrollably out of her comfort zone when he books her to sing at the local working Man’s Club, Mr Boos.

The title role of LV is performed by ‘The Girl of a thousand Voices’ Christina Bianco, but it is not until half way through the second act we see Little Voice’s ‘rise’ and we are treated to a magnificent medley that Bianco delivers such aplomb that her audience is held in the palm of her hand. Unfortunately, this five minutes of genius is a long time coming after an irritatingly first act.

Apart from LV and her admirer Billy (Akshay Gulati) none of the characters are likeable in any way. LV’s poignant silence is more than filled by the annoying shouting and madcap exploits of her mother, her friend and boyfriend. As we reached the interval there was nothing redeeming them as characters and we had seen very little of Little Voice.


Shobna Gulati (recently seen at the Theatre Royal Brighton in Everybody’s Talking About Jamie) plays LVs formidable mother, a brash, selfish woman bordering on the abusive as she neglects LVs needs. The role of Mari is huge and she gives it an incredible amount of energy and enthusiasm. Ian Kelsey is also grand as Ray, the chancer who uses Mari to get what he wants.

Despite the sterling effort of the cast, as a play The Rise and Fall of Little Voice is now past its prime, and served the only purpose of showcasing Bianco’s astonishing vocals. But…. they are definitely worth hearing – head over to Youtube now!