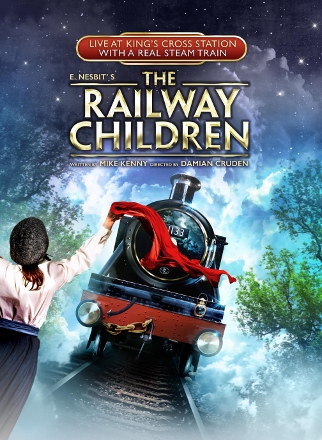 When my sons were young we spent hours on the platform of the Bluebell Railway, watching the magnificent steam engines pull in and out of Sheffield Park Station. Now the Bluebell has extended it’s line, I am blessed that the station is now less than half a mile away from my house, from my garden I can hear the occasional ‘toot’ as it sets off and on a still day hear the ‘chuff chuff’ of the steam.

There is something surprisingly romantic about steam engines. These huge pieces of machinery of a bygone era stir up the imagination and conjure up images romantic farewells, joyous reunions and happy jaunts to the seaside in days gone by.

Now on a plot of land just adjacent to King’s Cross Station in the heart of London everyone can experience the magic of the age of steam in a fabulous production of The Railway Children.

E.B. Nesbitt’s classic story The Railway Children encompasses all the romance of the era. The story is about three children who are forced to leave their comfortable house in London with many servants to live in a cottage in rural Yorkshire with their mother when their father is mysteriously taken away. Their life changes dramatically as the Railway Line becomes an integral part of their lives providing adventure and excitement.

What sets this play apart from any other production in London is the completely unique setting. The entrance leads you to the refreshment area / bar which is created to resemble an Edwardian waiting room and from here the audience enter the 1,000 seat custom built pop-up theatre.

The audience are seated at either side of a mock-up station divided by a full size train track. The performance all takes place on both platforms as well as on moving podiums that glide effortlessly up and down the tracks throughout the show.

Cottages, station houses, embankments and tunnels are all ingeniously created on these moving platforms as well as the trains that stop by the station with the aid of lots of organic smoke.

The posters boast a real steam train but even this effective setting doesn’t prepare you for the phenomenal moment when the magnificent locomotive rolls in. The effect was astounding.

The cast has Sean Hughes playing Mr Perks who is ‘a real brick’ and Caroline Harker giving a strong performance as the children’s mother. The three children Bobby, Peter and Phyllis were cleverly played by adults which although was a little off putting at the very beginning as they bounced around the platform was absolutely the right choice because of the complexity of emotions required. Other actors including lots of children play a multitude of servants, villagers and passengers.

Director Damian Cruden has cleverly balanced the show to ensure everyone had a good experience whichever side of the stage you are sat. Although you would get a different perspective from sitting at the opposite platform no vision or sound is lost at any time.

In short, The Railway Children is absolutely perfect for children, I had three 11/12yr old boys with me and they were absolutely mesmerised from the second the cast came on the stage platform, it is ‘first class’ entertainment for adults as well. There is a high quality of acting, plenty of movement and special effects, it is as much a unique experience as a theatrical production and I thoroughly recommend it for a half term treat.

More details about the Railway Children can be found here.