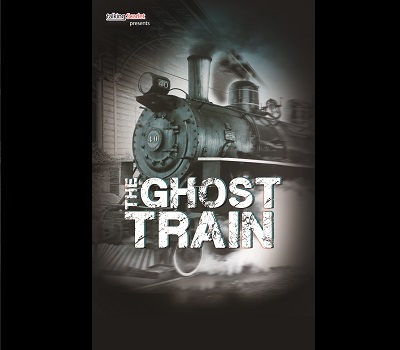 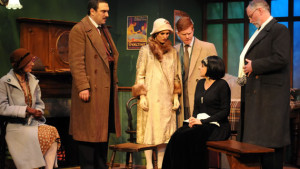 It is a while since I have visited The Capitol in Horsham so I was delighted to return last night to the opening night of talking Scarlett’s production of ‘The Ghost Train’ which is playing at the Capitol for only a three night run as part of their nationwide tour.

Written by Dad’s Army actor Arnold Ridley who drew on his experiences after he was stranded overnight at a remote railway station, The Ghost Train originally opened in 1925 in London and was later a film starring comedy legend Arthur Askey.

A group of travellers are stranded in the waiting room of an isolated Fal Vale station in Cornwall overnight. The station master played by Jeffrey Holland (Hi-De-Hi, You rang M’Lord) tells them the tale of The Ghost Train that mysteriously passes through the station at night and warns the passengers that whoever looks upon the train will come to an untimely death. With mixed reactions and tensions running high, the passengers settle down at the station for the night.

Ridley’s script hasn’t really stood the test of time and seems dated, however the cast do a sterling job of hamming it up and giving it the life it needs. Under Patric Kearns’ direction the production has a good balance of humour, mystery and suspense and has just the right amount of melodrama.

Tom Butcher (The Bill, Doctors) provides the laughs as the comical buffoon Teddie Deakin who has all the passengers riled with his insensitive comments and invidious ways. Judy Buxton (General Hospital, On the Up) brings a touch of Lady Bracknell to the role of spinster Miss Bourne, who steals many of the scenes in the first act only fall into a drunken stupor and sleep on a table throughout the second.

Relationships are also tackled in this multi faceted play, with two of the passengers being newlyweds and another couple having marital difficulties.

Once the characters are firmly established, the events that follow throw them all off kilter as they deal with not only their own feelings but those of the other passengers in the room as well.

The stage design was basic but very effective and the ghostly effects worked well aided by atmospheric lighting. These coupled with the cast’s varied reactions to the ghost stories and the events that followed provide tense anxious moments that have the audience wondering which direction the play will take next.

The Ghost Train is playing at the Capitol in Horsham until Wednesday 20th May booking link here however it will be back in the South East at the Yvonne Arnaud Theatre in Guildford next month as it nears the end of it’s tour. It is an entertaining night out with a talented cast, catch it if you can!

Interview with two of the stars Tom Butcher and Corrinne Wicks.