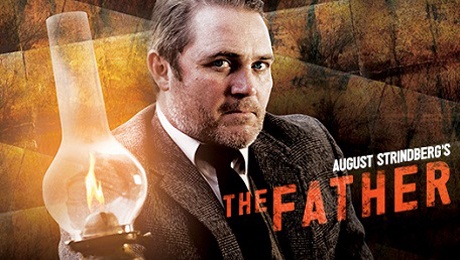 Last night I accompanied a good friend of mine Rebecca Felgate to the Trafalgar Studios to see Jagged Edge‘s production of August Strindberg‘s The Father. 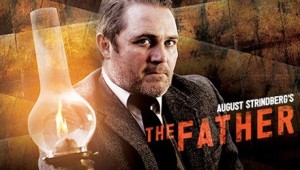 I had not heard anything about this play before and I admit I am unfamiliar with Strindberg so I really didn’t know what to expect. All the synopsis told me this.

An uneasy stand-off exists between the Captain and his wife Laura. But a disagreement over their daughter Bertha, triggers an all-out war.

Laura will stop at nothing to gain control of her daughter’s future. When she suggests to the Captain that he may not actually be the girl’s father, she sets a chain of events in motion that cannot be stopped.

It is a battle of the minds, but is it a battle either can win?

A battle of the minds it most certainly was. The tension between the characters of the Captain (Alex Ferns) and his wife Laura (Emily Dobbs) was incredible, as the irrational blame shifted between them their pernicious relationship was painful to watch. It is said that Strindberg wrote this play as his own marriage was breaking down and this seems apparent in the writing as there is so much hurt and bitterness on both sides.

As always the child, in this case Berta is caught between the two warring parents and is truly the victim as she has to juggle her feelings between them both.

Ferns and Dobbs were tireless and gave stunning performances and their supporting cast particulary June Watson were first rate.

The play is short. Laurie Slade‘s adaptation cuts a 3 act play to less than 2hrs long and doesn’t have an interval. It is very intense and at the end you feel you have been through the wringer but half a pint of Guinness later (well it was St. Patrick’s day after all) you can realise what an incredible piece of theatre you have seen.

You can also purchase tickets from her website as well.

The are some Question and Answer sessions hosted by MyTheatreMates co-founder Terri Paddock after the show on the following dates. These sessions are free for ticket holders for any performance in the run from March 11th – April 11th