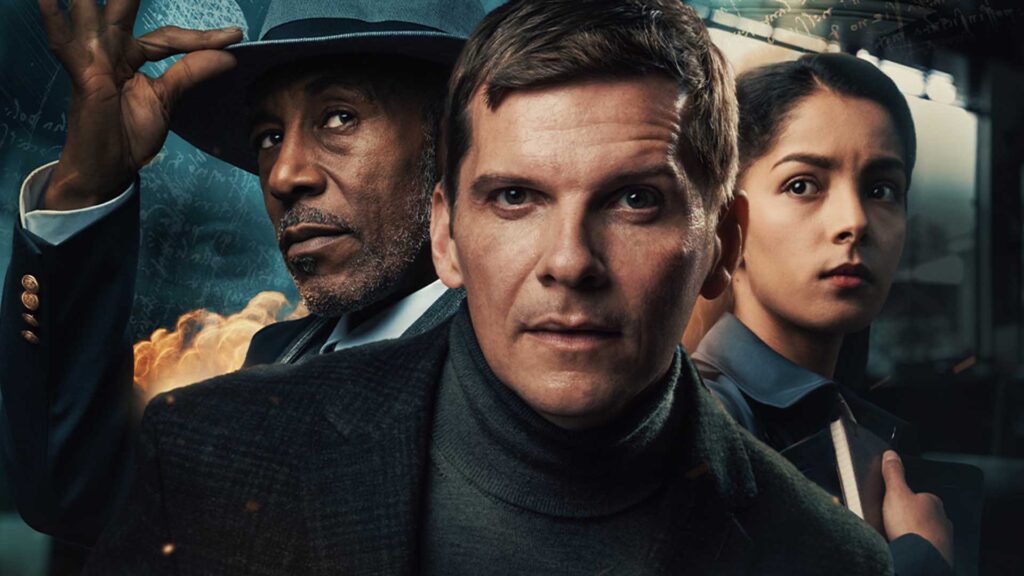 Headlining the first-ever stage adaptation of The Da Vinci Code, Nigel Harman says theatregoers are in for a real rollercoaster ride.

The ‘they’ in question are symbologist Professor Robert Langdon and cryptologist Sophie Neveu, with Harman promising a different take on the hero than the one we’re familiar with from the book and film.

“He’s one of the smartest people in the room,” Nigel explains, “but what’s wonderful about the play is that he’s also a little inept in some areas, such as when he’s handling his gun and when he makes silly mistakes about the most obvious stuff whilst also solving the most complex matters, equations and Newton’s theory of gravity.

“He’s very human in our play. There are moments where he’s vulnerable and he loses his temper at one point because he’s so frustrated. That’s the joy of the play – it fleshes out the main characters more than I’d say has been done before.”

Harman sees the challenge of playing Langdon as staying in the present, saying: “Every night the story unfolds in front of me so it’s all about not pre-empting what’s coming, not even to think about what the next scene is and just stay in the moment because each clue leads to the next step and if I get ahead of myself then it loses its magic.”

The labyrinthine thriller begins with the discovery that the curator of the Louvre museum in Paris has been brutally murdered. Next to his corpse someone has left a series of baffling codes which set Langdon and Neveu off on a pulse-racing journey to solve them before a shocking historical secret is lost forever. It’s a quest that leads them to works of Leonardo Da Vinci and beyond in a race against time across Europe.

Novelist Dan Brown hit the jackpot when he wrote The Da Vinci Code as a sequel of sorts to his 2000 novel Angels & Demons (in which he first introduced Langdon). Published in 2003, it went on to sell more than 80 million copies and has been translated into over 40 languages.

“The one thing I wanted to do was not have the mullet,” Harman laughs about Tom Hanks’ distinctive hairdo in the 2006 blockbuster movie. “That was a key character decision there! But the stage version is very different. It moves as fast and it’s just as complex but we’ve got an extraordinary visual landscape and what I would describe as a banging soundtrack. We’ve got this energy that is propelled throughout the play and it’s underscored so you get a real sense of time, tempo and all that sort of stuff. If you like the book and you like the film definitely come along and see the play because you’ll get another layer.”

Written by Rachel Wagstaff and Duncan Abel, who also adapted The Girl on the Train for the theatre, the play is directed by Luke Sheppard, who says: “We’ve approached it from a very theatrical perspective. It’s full of movement and music and visuals. We deliver a lot of those famous moments, like the reveal of the Vitruvian Man symbol, and the hidden writing on the wall literally appears before your very eyes. A lot of the feedback so far has been like ‘Wow, it’s so exciting to see a show of this scale on tour’.”

It’s set in the here and now, with modern-day mobile phones and other technology, and ambitiously combines traditional scenery with video projections. Then there’s the music by Ben and Max Ringham, which the director describes as combining religious motifs with an upbeat and contemporary score.

An avid fan of the book, Luke was drawn to the piece because it represents a new challenge. His credits include such musicals as & Juliet, Rent and In the Heights. “But plays are what I studied first and foremost so the chance to take a brand new play and give it all the wonder I love bringing out in my musical theatre work feels like a good marriage and match. I have appreciated the work of the writers over the years and we’ve wanted to work together on something, and when this came along it felt like exactly the right project at the right time.”

As well as fleshing out Langdon as a flawed hero, the creative team have also zoomed in on the character of Sophie, with Luke explaining: “It’s about her quest throughout the piece and understanding her place in the world, and I think audiences will really enjoy seeing it through her eyes.”

Making her UK theatrical debut after working mainly in the US, Hannah Rose Caton is excited to be playing Neveu, describing her as “a dynamic character who is full of wit and highly intelligent and who reads people and circumstance incredibly well”.

Hannah notes how Sophie uses her cryptology skills to move through the world. “But she also has a beautiful emotional life that we see throughout the play and she’s quite empathic, which you see in moments between her and Professor Langdon. She has vulnerabilities but also this strength about her.”

Having studied at the Brit School for Performing Arts in London and recently graduated from the Juilliard School in New York, the Finchley-born actress couldn’t ask for a better role for her UK debut. “She really is a dream part because she is so multi-faceted and it’s fun to delve into the text. You’re stimulated spiritually and emotionally, and also even physically because there’s movement and fight choreography.”

Hannah avoided doing too much research because like Langdon Sophie is learning as she goes along but she’s read Dan Brown’s book and believes the mystery at its heart is why the Da Vinci Code story continues to enthrall people. “It’s also about how the characters change when they meet each other. The greatest moments in life happen when we are truly listening and there’s that small window of possibility for change.”

Sir Leigh Teabing – the historian and Holy Grail scholar who helps Langdon and Neveu in their quest but who also has a duplicitous side – is played by Danny John-Jules.

One of Britain’s best-known entertainers with a CV that includes such TV shows as Red Dwarf and Death in Paradise and Barnum and Starlight Express on stage, Danny laughs about taking on a character brought to life by Sir Ian McKellen in the film version. “He’s a huge character who was previously played by a huge character in a huge movie based on a huge book. So, no pressure!”

The Londoner sees Teabing, who is living a double life as the mysterious Teacher, as a millionaire puppet-master and a lonely eccentric. “And the challenge is to bring him to life in my own way. There will always be people who go ‘I preferred the film version’ but my reaction to that is ‘Bring it on!’”

Asked why, nearly 20 years after Dan Brown’s book stormed the bestseller charts and some 16 years since the film was a box office smash, the tale still fascinates, Danny posits: “If you think about it, we live in a Christian country and The Da Vinci Code makes people question their religion. Then there’s the conspiracy theory aspect to it, conspiracy theorists will always be around and their questions will never be answered. You could do The Da Vinci Code in 100 years’ time and people would still be torn as to whether they believe it or not.”

As for what the play’s director hopes audiences will take away from seeing it, Sheppard says: “I hope that people who know the book will feel like we’ve added something to their experience of the story, like ‘I’ve never quite looked at it that way before’. Then those who come along having never read the book or seen the film will hopefully be going ‘Now I see what all the fuss is about’.”

Nigel Harman agrees, adding: “It’s really flashy and it’s classy, and I love that we’re taking that to people’s hometowns and going ‘We’re here to entertain you, please come along’ rather than ‘We’re all in London, come down here, it’s great’. I love London. I live in London and the West End is brilliant but I also think there’s a time to get out into the communities.”