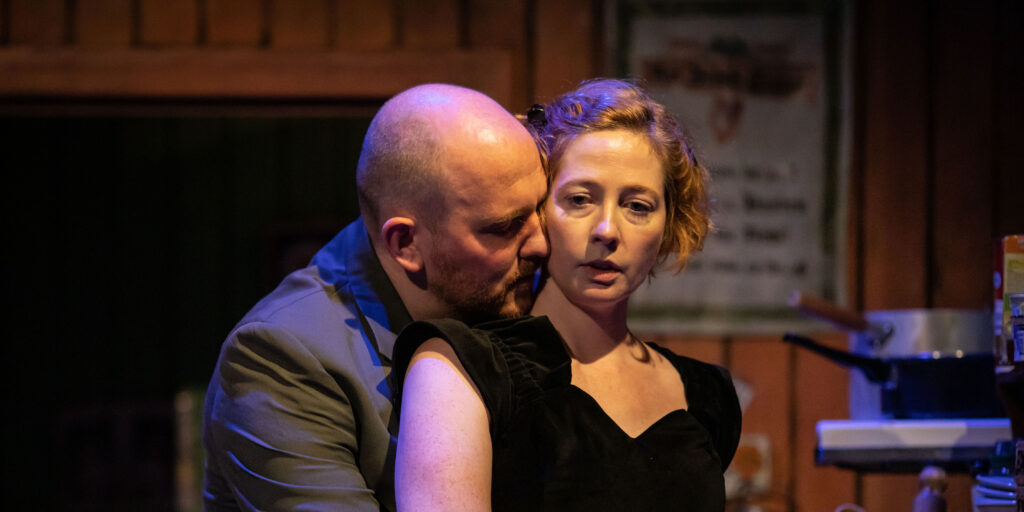 What a joy to be back in the theatre watching brilliantly constructed live performances once again.  Currently showing in Chichester’s intimate Minerva Theatre is the powerful, dark drama The Beauty Queen of Leenane by Martin McDonagh.  He needs no introduction having produced many award-winning plays alongside the hugely successful screenplay Three Billboards Outside Ebbing.

The play is set in solitary, rural Connemara in a drab, cluttered cottage inhabited by 70 year old housebound Mag and her 40 year old spinster daughter Maureen who acts as her carer.  They are trapped in an oppressive and savage co-dependent relationship.  Mag relentlessly twisting the knife with a level of intensity that Maureen’s fragile mental state ultimately cannot cope with and her emotions eventually start a trail of events that culminate in a shocking conclusion.

Director Rachel O’Riordan (Artistic Director and CEO – Lyric Hammersmith Theatre) has gathered a strong cast of Irish actors who astutely observe the complexity of the characters they are playing, all of whom bring this poignant, brooding tale of bleak isolation and painful sadness, to life.  Ingrid Craigie excels as cruel but vulnerable Mag terrified of being abandoned by her daughter.  She is merciless in her manipulation and determination to defeat the only opportunity Maureen ever has of leaving this depressive situation.  A terrific performance too from Orla Fitzgerald playing the tormented downtrodden Maureen.  Frustrated by her lack of opportunity she seizes it with both hands when Pato briefly enters her life, but as it slips away her burning resentment leads to an uncontrollable bitterness.  Adam Best (Pato) is Maureen’s only chance to escape her deeply engrained predicament but his hesitancy has dramatic consequences as does Ray’s (Kwaku Fortune) inability to follow through his instructions!

This is an intense snapshot of a small community in a period of Irish history when work was only to be found in England or America.  An outstanding production which should not be missed, transferring to the Lyric Hammersmith next month.