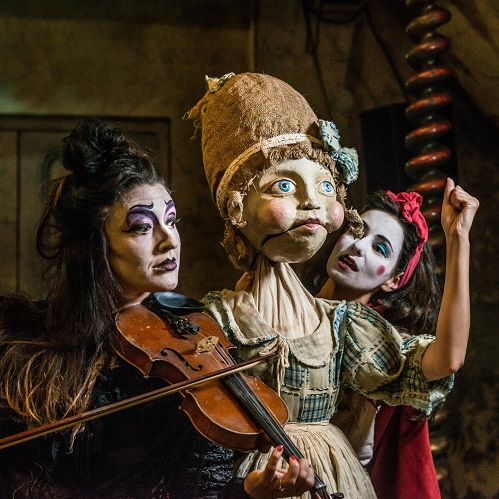 Les Enfant Terribles are a company that have won my heart over the years for their vaudeville style, creative storytelling and original innovative ideas, and The Terrible Infants, the company’s namesake, was the 4th production of theirs that I have had the joy of experiencing. This time they took the stage at Wilton’s Music Hall, a stunningly vintage venue that was destined to host such a wild and wacky piece.

Celebrating 10 years since the show was first performed, the company revisit this production that began their transition from a fringe company to where they are today, one example of their various successes along the way includes producing the Olivier award-nominated Alice’s Adventures Underground which offered theatre goers a fresh and exciting interactive experience at The Vaults. 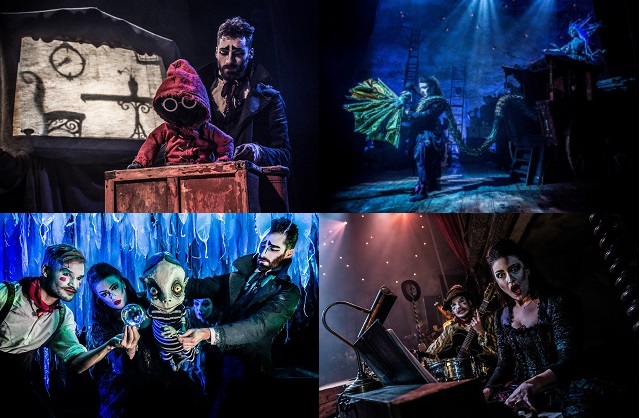 The Terrible Infants is a delicious blend of breathtaking puppetry, live music, and vivid storytelling. The narrative amalgamates short stories of various children, terrible infants if you will, who all have a lesson to learn and a fantastical adventure to embark on. The audience follow these stories, and the cast’s narration around them, with silly antics throughout that keep the show flowing with rich humour and joy.

The show is compared to a blend between Tim Burton and Roald Dahl, which is a perfect description of the twisted and fantastical style of the production. While Tim Burton is the most giant of film directors and Roald Dahl the most magic of storytellers, Les Enfant Terribles are the masters of their craft on stage.

Co Director and narrator Oliver Lansley leads the show, and you can see his dedication and vision of the company pouring out of every action he does on stage. The script is so well written, with constant allitaeration and rhyme throughout making the piece flow seamlessly. The most impressive feat is that they have hit the perfect blend for all ages, they have produced a show that is suitable for children aged 6+ but with so much adult appeal, that whether you’re a “big kid” or “small grown-up”, you’re going to be swept away.

The entire cast are multi talented with so many skills displayed on stage, not only is their acting full of boundless energy, but they also perform instruments, with lots of singing throughout. They interact with the dynamic set and of course create a magical world through puppets.

As someone who is passionate about puppetry, I was left in awe at the vast and beautiful characters that had been created. From an oily boy who dreams of being a fish, to a girl who lives with a beehive in her hair, to giant bears and a child who eats more than his fair share on his dish, to a sad abandoned invisible kid, to a glorious mermaid with her tail amid waves that fill the entire auditorium, The Terrible Infants is an unmissable story.

I feel treasured to have experienced this wonderful show, in which I can only describe as one of the best production I have ever seen.

The Terrible Infants have made the most Spectacular Show.