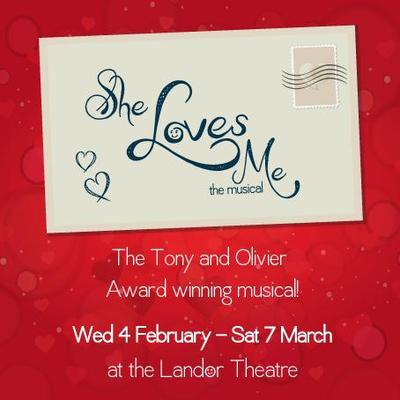 She Loves Me | Landor Theatre

With music and lyrics from the talent behind Fiddler on the Roof (Sheldon Harnick and Jerry Bock), the Tony and Olivier award-winning musical She Loves Me comes to the Landor this February. Fall in love with this charming tale of mistaken identity based on the play Parfumerie by Hungarian playwright Miklos Laszlo.

She Loves Me revolves around one little shop in Budapest and two of its employees. Despite being consistently at odds with each other at work, through lonely hearts ads they unknowingly become each other’s anonymous pen pals and a world of witty romance evolves. The plot is known to many through the popular Tom Hanks-Meg Ryan film, You’ve Got Mail.

From the production company that brought you Damn Yankees, She Loves Me promises to melt even the iciest of hearts.

Charlotte Jaconelli (2012 Britain’s Got Talent runner-­up) will play Amalia Balash int he Landor Theatre’ s revival of She Loves Me this February.

Having trained at Arts Educational School, this is her Musical Theatre debut.

Charlotte commented,
I’m absolutely thrilled to be making my debut at the fabulous Landor Theatre.
I’m so excited that I get to be a part of She Loves Me with such a talented team of cast asn creatives!

Why not treat your own ‘Dear Friend’ to a night out to see this witty, romantic tale of love, laughter and long-revealing letters? Who’s sleeping with the boss’s wife? And does jealousy finally get the upper hand?

“Theatrica Ltd is delighted to announce that this very beautiful boutique musical will play at the equally beautiful Landor Theatre. With a score covering everything from soaring heartfelt ballads to delightfully witty patter songs there’s something for everyone. This is all delivered with that trademark Landor musical style – a beautifully balanced band with completely natural expressive voices.” Robert McWhir – Director