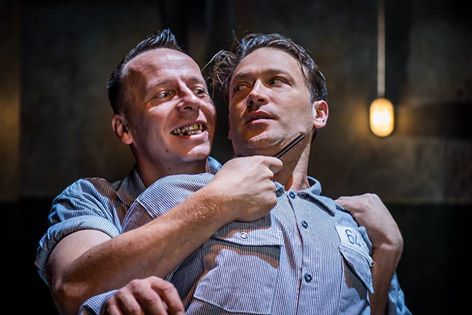 When you have seen how good the 1994 film The Shawshank Redemption is, it is difficult to imagine how they could translate such a good story on to the stage but in a touring production currently at the Hawth Theatre in Crawley they seem to have pulled it off, giving a tale of hope, longing, friendship and sheer determination.

Paul Nicholls plays Andy Dufresne, who is incarcerated in “The Shank” for the murder of his wife and her lover, whilst vehemently protesting his innocence. He is then subjected to ordeals that would test any man to the limit but Andy manages to hang onto his dignity and strength, with the help of Ellis “Red” Redding, ably played by Ben Onwukwe. Red also acts as narrator throughout the play and Ben swaps between his scenes and his narration very well.

The play, based on a Stephen King novel and been adapted for stage by Owen O’Neill does not shy away from the grim realities of prison life at all but this is not shown in a gratuitous way, so this somewhat shields the audience. The story also has it’s moments of comedy, which give a stark contrast to the trials and tribulations that Andy and the other inmates have to endure. The corrupt warden Stammas is well played by Jack Ellis, who adds to Andy’s torment.

The set is simple but effectively used and the addition of music between the scenes adds to the overall feeling of the play. Those who loved the film will probably embrace a new way of telling this compelling story and at the same time it invites a whole new audience to experience and enjoy it.

The Shawshank Redemption is directed by David Esbjornson

Produced by Bill Kenwright The Shawshank Redemption runs at The Hawth, Crawley from 10 to 15 October 2016

The show is suitable for ages 14+, includes strong language.