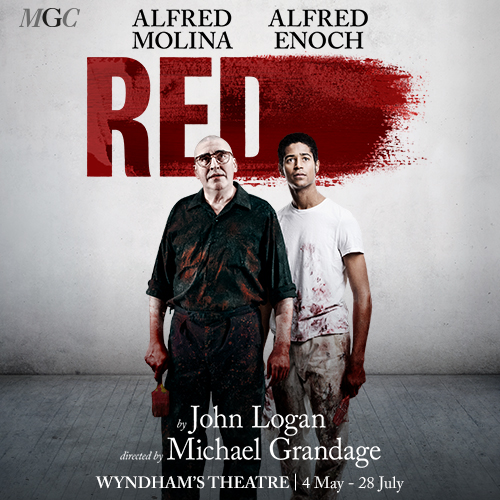 Succeeding its premiere at the Donmar Warehouse in 2009, John Logan’s Red opened in London’s West End on 4th May 2018 at the Wyndham’s Theatre to an incredibly welcoming audience. This follows its extremely successful run on Broadway at the Golden Theatre, where it won six of seven nominated Tony Awards, including Best Play.

The play opens with renowned abstract artist, Mark Rothko (Alfred Molina) and his newly acquired assistant Ken (Alfred Enoch) following a commission for a series of murals from the local profligate restaurant the Four Seasons. Set in a New York studio void of any natural lighting, we’re presented with a set that is the epitome of organised chaos, which extends through to Rothko’s paintings that you can’t help but be drawn into as you desperately try to understand the stroke works of a genius. Ken’s youth and new stance on the world of art challenges Rothko’s every artistic decision and causes him to question all that he produces.

Alfred Molina’s reprising portrayal of Mark Rothko provides the perfect balance of passion and humour that reflects the dark intensity of a character who comes across as entirely powerful and powerless all at once, for he is lost in the purpose of why he paints. I was thoroughly convinced by his performance which was utterly gripping and provoking. How to Get Away with Murder’s Alfred Enoch, plays the typical questioning-all, newly graduate art student, that any established artist absolutely despises – which Enoch conveys with a refreshing sense of understanding and yet still laced with naivety. The pair create an on-stage connection that is believable and frequently had myself and the audience laughing at the witty nature of the pair.

Red provides 90 minutes of true escapism where you’ll find yourself emerged into the private space of an artist, that in turn emerges you into the complex mind of a man so devoted to his artistry that has forgotten his sense of self and purpose.

Red is playing at the Wyndham’s Theatre until 28th July 2018. I urge anyone with a passion for art to go and see this incredibly thought-provoking play.

Note: This review was written after a preview performance.