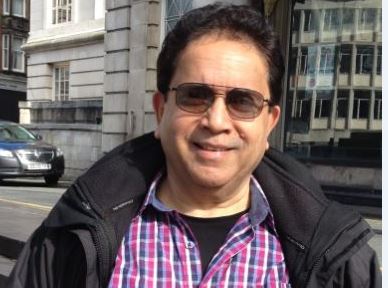 Waking up in a coffin is a dreaded nightmare for most. Waking up in a coffin at your own funeral to find your girlfriend and her new lover (who she cheated on you with) planning to move into the flat you shared (that, by the way, you own) is probably worse. But that’s exactly what happens to John Jones.

To say John is having a bad day is an understatement. Remembering only a car crash with a hazy sense of having been in hospital, coupled with some exceedingly strange dreams, Max Nowaz’s  ’Cheating Death’ is a play packed with dark humour and staged with wit and originality as it follows John’s attempts to crawl back to normality.

This is the first staged play from established novelist Max Nowaz. Max has enjoyed notable success with books for both children, including Timbi’s Dream and for adults including The Arbitrator and Get Rich or Get Lucky (all Troubador Publishing). Now, he turns his trademark style of sharp wit, gallows humour and surrealism to the stage.

Can you tell us a bit about your background? How did you get into writing?

I’d been trying to write a novel for the last twenty-five years but whilst I was running my own business, I never quite found the time to finish it. So, after selling my business in 2009, I decided to attend some creative writing courses and finally finished my first novel in 2012. Whilst I was writing the novel, I became interested in exploring playwriting and so I attended a playwriting course in 2011 and after I wrote ‘Cheating Death’.  I’m also in the final stages of putting the finishing touches to ‘A Holiday to Remember’ which will be my next staged play after ‘Cheating Death’.

What gave you the general inspiration for writing Cheating Death?

It started with a writing exercise in a writer’s group, where we had to draw a word and then write for ten minutes about whatever word we’d drawn. I drew a coffin and had remembered reading an article in the newspaper about a man who woke up in a one, so I wrote about that. After the ten minutes were up, I found that I still had more to write and so it became the basis of the play that is now titled ‘Cheating Death’.

You have quite an established career as a novelist. What made you choose to write Cheating Death as a play instead of a novel?

Despite my published work being in the shape of novels and books, I actually find plays easier to write. However, I can write plays and novels simultaneously as when I run into writer’s block with a novel, switching to writing a play can be of light relief, done for my own enjoyment

would definitely call Cheating Death a black comedy – how important do you find injecting humour into your writing?

I can’t imagine writing a play without humour in it. I find that even in the most serious moments in life, there’s always something funny happening. For this particular play, whilst touching on some serious themes – love, death, betrayal – I wanted the overall takeaway feeling to be a more light-hearted one. Creating humour on stage can have its obstacles as you’ve got to make sure that the subtleties in the writing come across as well as making sure that your actors get the timing of the line right. However, we’ve got a great cast and I’m looking forward to seeing their interpretations of the characters

play opens with a man waking up in a coffin, quite a terrifying thought; is this a fear you have?

Strangely – no, not at all. I’d love to wake up again after I’ve been put in a coffin. After all, I’d rather be alive than dead

is a theme of love and betrayal in the play; can you talk a bit more about the importance of this theme?

I see love and betrayal as a universal theme; they go hand in hand in my opinion. There’s always the risk of betrayal, but we shouldn’t let it scare us into not falling in love. in life, you will likely come across betrayal in one form or another. I think, in theatre, it’s important to portray real and have characters work through real issues and emotions. These two particular themes, I think, can be presented on a spectrum of seriousness – from the hard-hitting and cathartic to the playful and humorous.

What is your favourite genre of book to read for leisure?

For my own personal enjoyment, I read a lot of science fiction and it’s also the genre that I’m drawn to in my own writing as well, particularly with novels. As well as Sci-Fi, I like fantasy with a tinge of realism. And then, I force myself to read the classic literature out of duty

is your favourite place to write? (at home/in coffee shops etc)

I would say at home as I prefer writing the first draft by hand, before typing it out. When I’m at home, I’m also able to stretch out and get up and move around freely if I need to

are your plans for Cheating Death in the future?

No immediate plans but I’ll keep my fingers crossed that some big producer will pick it up, when they see how good it is, haha!

Cheating Death will be at The Cockpit theatre from Thursday 21st Feb 2019 to Sunday 10th March 2019.

7:30pm Plus matinees at 3pm on Thursday 7th and Sunday 10th March