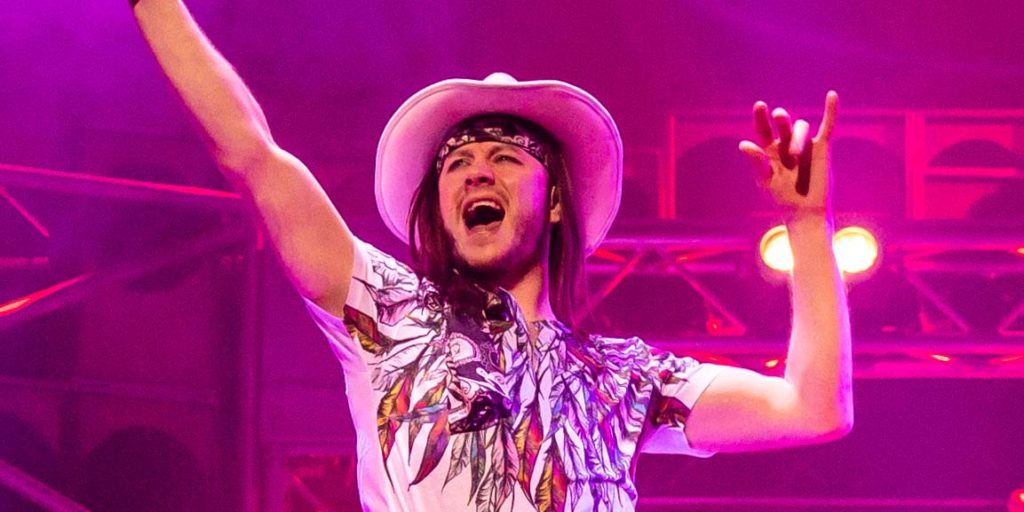 What is it like switching from Strictly Come Dancing training sessions, and the high of winning the show with Stacey Dooley, to taking on the role of Stacee Jaxx in “Rock of Ages”?

It’s really exciting because I’ve wanted to do musical theatre for so long. I’ve talked about it quite a lot over the last couple of years, but everything has been so dance and Strictly focused, so when this opportunity came up I wanted to grab it with both hands. I feel like I’m switching roles from Strictly, as there I’m in my comfort zone, I’m the professional and Stacey is the celebrity trying to learn to dance whereas now I’m figuratively and literally becoming Stacee! Actually, one of my favourite facts is that that I obviously just danced with Stacey Dooley on Strictly Come Dancing, and her full name is actually Anastacia Jaclyn Dooley, and her nickname is Stacey Jacs, so it seems like it was all meant to be!

What made you want to be involved with Rock of Ages?

I first saw the show in 2009 on Broadway, when I was in New York with “Burn The Floor”, and “Rock of Ages” was on the next street over. I just loved it and went back and saw it two or three more times on Broadway and then saw it again when it came to the West End. I’m a big fan! I’ve always been a massive rock fan anyway, and before I was on Strictly I used to fancy myself a bit of a rock star. I used to have long black hair and eye makeup and black fingernails and used to swan about thinking I was the Jim Morrison of the ballroom!

I never thought they’d want me to be involved in the show, let alone play Stacee Jaxx so when they suggested I come in and audition it was just unbelievable.

How was the audition?

I think it went well! It was a bit daunting to be auditioning as a musical theatre performer, rather than as a singer. I was in “Dirty Dancing The Musical” before but that was primarily a dancing role. However, the director and choreographer, Nick, has an amazing ability to make you feel immediately comfortable. I didn’t feel like I was being judged so I just went for it!

Could you tell us a little about the show?

It’s the story of two wannabes that have headed to California to make it as stars, all told with the help of amazing 80s power rock songs. Drew wants to become a rock star, and Sherrie was to become an actress. They both end up working at this bar, waiting tables and falling in love. However, in walks this guy Stacee Jaxx who is the front man of a rock band. He’s the over the top, flamboyant megastar that all the girls want to be with and all the men want to be but at the same time he’s a bit of a villain – he’s pretentious and self obsessed, thinking he’s God’s gift to everything and ultimately he disrupts everyone else’s lives!

Will it be quite fun playing someone a bit villainous?

Oh yeah. I can definitely tap into the pretentious nature of him – I think I used to be a bit like that, thinking I was a rock star when I was just a ballroom dancer, everyone goes through that sort of phase a bit though! I used to think I was really rock’n’roll when I am the least rock’n’roll person in the world!

It will be fun to play Stacee as he’s so different to how I am on Strictly, and how people are used to seeing me. Although having said that, “Rock of Ages” is just as flamboyant as Strictly, and has the same sense of fun, although in a different way!

What are you doing to prepare for the role?

I’m taking singing lessons to make sure my voice is strong enough to sing the role, particularly to be able to maintain it. It’s one thing to be able to sing in an audition but it’s another to do eight shows a week and belt out these amazing 80s tracks.

Do you have a favourite song you look forward to performing?

My first big song is Bon Jovi’s ‘Dead or Alive’, that’s Stacee’s big moment and I love that song. It’s his big opening in the show and you’ve really got to come on and make a massive impact with the audience, really get them going and show what kind of character Stacee is. It should be fun!

What are the challenges of performing this style of music?

I’ve spent a lot of time learning how to breathe differently as a singer than I do as a dancer actually. As dancers we take shallow, short bursts of air as we move, whereas when you’re singing and hitting these big notes you want to take in large amounts of air quite quickly and from quite low down. I’m training myself to be more conscious of my breathing and getting used to it. Otherwise I might run out of breath on stage! You don’t realise all these things until you start learning about them and it’s not just a case of thinking I can hold a tune therefore I can do a musical, there’s much more to it than that.

What was your first experience of musical theatre?

One of my earliest memories is me and my sister sat in front of the TV watching “Chitty Chitty Bang Bang”. We used to get the fire guard from the fireplace and put it in front of us, pretending it was the car. We would sit there one behind the other singing! We used to get my Dad’s snooker cue out of the garage and do Me Ol’ Bamboo!

When we were really young we came down to London to watch “Cats” and I remember being so blown away by the whole spectacle of it all. I remember sitting there and thinking this is amazing. Mum and Dad bought us the soundtrack on cassette, and I used to sit and listen to it all the time.

Do you have a role you’d love to play in the future?

I don’t know specifically – I think this is it, being Stacee Jaxx! Like I say, Rock of Ages is my favourite show and it is just much fun, and you just have such a good time when you watch it. I’ve been a little bit obsessed with it for a few years so when they said about playing Stacee Jaxx I thought it was perfect, I’m going to be able to be in a show I love.

You’ve toured before with various shows, is it something you enjoy, or do you find it a challenge?

I love it actually. I don’t have a problem with tour life, I quite enjoy it and find it exciting. When you’re on tour with a cast you really get to know them and you build a sense of family. It all feels like a bit of adventure.

Do you have any ‘must-have’ items you take with you?

My podcast app on my phone, I’m constantly listening to podcasts on my phone, lots of motivational ones. My iPad too, so I can catch up on Match of the Day and stuff!

Do you have a go-to karaoke tune?

My karaoke song is “Are You Gonna Be My Girl?” by Jet. I love doing that at karaoke but I used to really scream it out and not be able to talk afterwards!

What do you like to do during any down time you get?

I’ve not had any downtime for a long time, but I’m a massive football fan. Scunthorpe United is my team!

Have you ever been given a piece of advice, or some words of wisdom that have stuck with you?

I can’t remember who said it to me, but I took it on board, “it’s not about doing nothing wrong, it’s about doing something magical”. I think people make the mistake of thinking to do a good performance they’ve got to be technically perfect, but there are some brilliant performers who can hold a crowd in the palm of their hands but they’re not always necessarily the best dancers, singers or actors. However, they can create magic and make people feel something.

Finally, what can audiences expect when they come to see you in Rock of Ages?

Don’t expect ‘Kevin from Grimsby’ as they call me on Strictly Come Dancing! It’s me in a completely different light, probably being a bit raunchier than you’re used to! I’m going to look completely different, but it will be a lot of fun and you should expect to have an amazing time.

Rock of Ages starring Kevin Clifton will be performed at The Hawth Theatre in Crawley 19th – 23rd February.

3 thoughts on “Interview with Kevin Clifton | Rock of Ages”