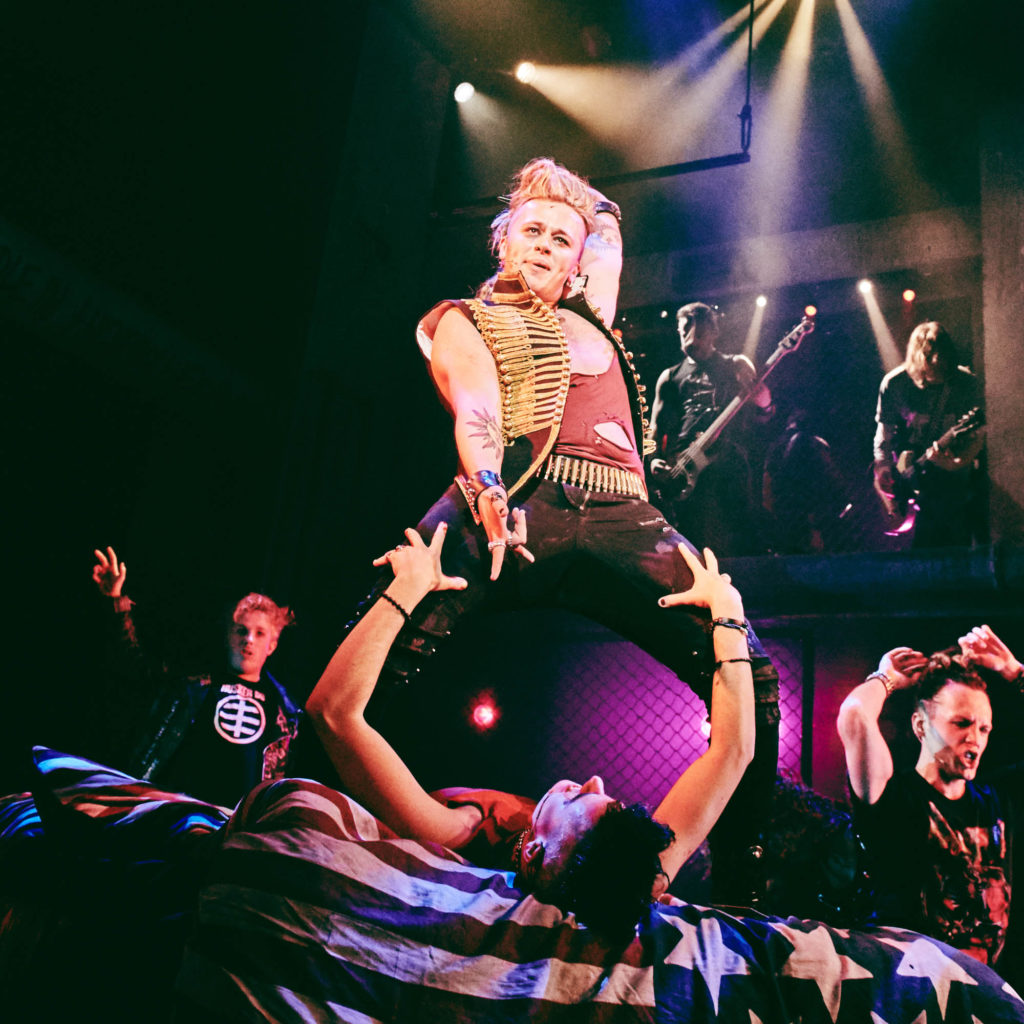 Luke Friend who was a finalist in the 2013 series of plays St Jimmy in the Green Day musical American Idiot.
He tells us about the role and how the US band was pivotal to him picking up a guitar.

How does it feel to be making your musical theatre debut in American Idiot?

It’s an amazing feeling. I don’t think I’ve ever been this proud of something.

What’s the show about?

The show is based on a Green Day album and follows three friends trying to find escape from their suburban lives.

The story is harrowing. It’s about people struggling because they don’t know their place in a world controlled by people who are power hungry. It asks ‘How would you get through the struggles of being down and not recognising your place? How do you get out of the rut you’re in?’

It’s an amazing experience to be able to do some really serious theatre.

It doesn’t shy away from tough subjects, does it?

No, it is tough. In real life, some of us have never felt the hardship we go through on the stage, but you get immersed in it so much while you’re on stage and your character takes over.

It’s very emotional. I’ve had times when I’ve been a bit tearful.

You’re character, St Jimmy, is a drug dealer. What’s he like to play?

He’s a skitty maniac. Crazy. He’s got a lot of attitude. He’s a very complex character and I love playing him; trying to taunt people, taking control of the stage and taking over everything is great fun.

This is the 10th anniversary tour of the show. Why do you think it is still popular a decade after it premiered?

The score is incredible and the music is so nostalgic for a lot of people. When Green Day were writing American Idiot, they were all going through a mad time. They were super angry with the world. Not much has changed. There’s still a lot of very awful people out there, so it still resonates with the world today.

Were you a fan of the album?

I was the dude with the black emo hair and painted fingernails. I don’t think it’s any surprise to anyone that I loved that album when it came out. It’s the thing that got me to pick up a guitar and start playing.

I must have been about 12. I didn’t even know how to tune a guitar then. The first song I attempted was When September Ends. I’d been playing for about three hours and my fingers had blistered, but I’d gone through that and carried on because I was determined to get it right. That first day was pretty disastrous, but I stuck at it. I actually performed that song for the audition as well.

You’re working with fellow X Factor contestant Sam Lavery and The Voice’s Tom Milner on the tour. What are they like?

Genuinely, we get on so well. We really do. Sam and I knew each other before this and we’ve always got along. Tom and I are total wind up merchants, so I think that’s going to be great fun for the tour.

Are you excited about touring?

I feel like my whole life’s a tour, so this is brilliant. It’s slightly more organised than my life usually is; at least I know where I’m meant to be. I once booked two gigs a day apart. One was in south west Devon and the next day was in Inverness. I’m glad we’ve got professionals organising this tour.

What makes seeing a live show so special?

It’s real and authentic. It’s never quite the same every time you watch it. People may react differently; people may feel a different way in the moment. On television, you can rewind it and watch it again and it’s going to be exactly the same. Theatre is there, it’s live. It’s like a concert. What’s better than a live concert? I’d rather have no CDs at all and be able watch my favourite people play live each night. It’s up front, it’s personal and it’s special to you because no one else is going to see the performance you see.

Looking back on it now, how was the X Factor experience?

It is an incredibly intense, frightening but amazing experience. It positively conditioned me to be more relaxed in very heated and stressful environments, so it was a big positive. I’ve always loved the show. I still do. I love the people who worked on the show; they were always really good to me.

What can audiences expect from a trip to see American Idiot?

Passion. Everyone in this cast is amazingly passionate. If someone is loved on stage, you know they’re loved. If someone is raging on stage, you feel it. And you won’t be able to stop jiggling your feet if you’re sat in the audience either. It’s going to be incredible.

Luke Friend will be performing as St Jimmy at the Theatre Royal Brighton in American Idiot between Tuesday 16th and Saturday 20th April.