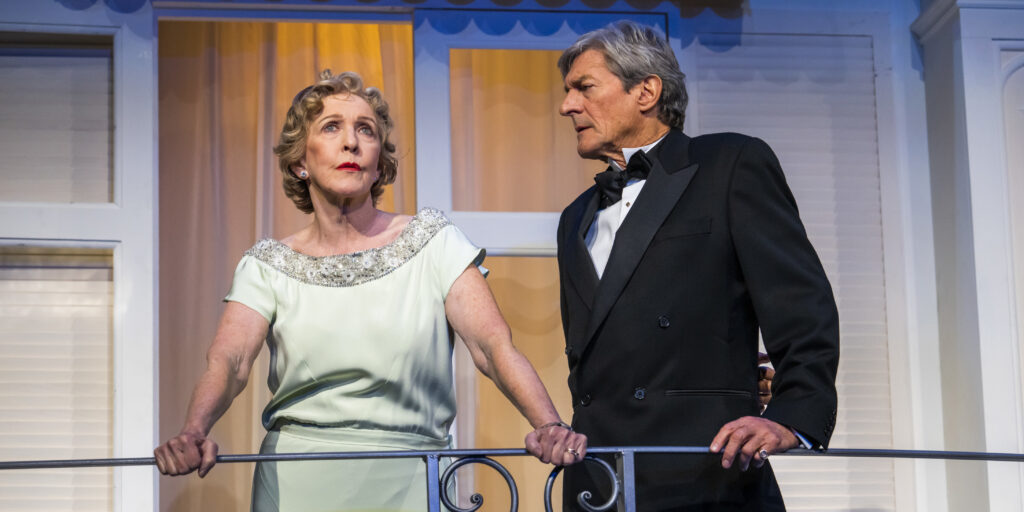 This is a very difficult review to write because I want to encourage as many people as possible to go to the theatre especially after the last 20 months so I will try to focus on the positive aspects of this production of Private Lives at Chichester Festival Theatre as much as possible.

Noel Coward was in the middle of an extensive Asian tour when he contracted influenza in Shanghai. He spent the better part of his two-week convalescence sketching out the play, Private Lives and completed the actual writing of the piece in only four days. It eventually premiered in 1930 with Coward himself in the role of Elyot at the age of 30 and Gertrude Lawrence playing Amanda at the age of 32.

There is no escaping the irony therefore that Nigel Havers should cast himself as Elyot in this, the inaugural production credited to The Nigel Havers Theatre Company. Havers is a shoe-in for the role or would have been 40 years ago.

Elyot and Amanda, who were once married to each other, find themselves on honeymoon with their new partners, Sibyl and Victor in the same hotel in the South of France and admiring the vista from adjoining balconies. Their initial horror evaporates as, within no time at all, they’re sharing cocktails, cigarettes and a romantic serenade and rekindling their previous passion. Caring nothing for scandal, they elope to Amanda’s Paris flat where their lust thaws as quickly as it had reignited and they resume the slanging match which drove them apart in the first place.

Dugald Bruce-Lockhart as Victor is excellent however it is Natalie Walter as Sybil who steals the show. Hers is a wonderful performance that Coward himself would surely have been proud of. It is Walter who sets the energetic pace required in Act 1 played out on a rather bland ‘balcony’ set complete with keyholes that haven’t been blackened so you can see they are not real! She allows the dialogue to breathe whilst Havers attacks his side with a velocity that suggests he is anxious to get off stage so he can have a little rest. Patricia Hodge as Amanda copes better with much of the dated language however her relationship with Bruce-Lockhart is more maternal that that of newly-weds.

Sacrilegiously, I’ve often found Coward’s work to be the ‘emperor’s new clothes’ and this production did nothing to change my mind. It will sell extremely well in the home counties so this review will do nothing to prevent people from flocking to it, however, I would love for someone to come along and devise a production of Private Lives that elicited a similar response to when it was first produced in the same way that Lawrence Till did at the Bolton Octagon with The Importance of Being Earnest. Ninety years on, the paper thin plot of Coward’s supposed masterpiece comes out as ordinary; people watching the play in 1930 were being attacked, they were being trivialised and a play like this requires a director who forces the audience to listen anew and make the story more extraordinary.

Overall this is ‘safe’ theatre with no surprises. Audiences will certainly enjoy not to be challenged or forced to concentrate whereas I prefer my theatre to be less instantly forgettable and more visionary and demanding. In the long run, it is that kind of theatre which is more sustainable and more exciting.