I cannot believe that it was only couple of days ago when I was reviewing Sleeping Beauty that I made the assumption that pantomimes all followed the same format. I was at Peter Pan last night at the Assembly Hall Theatre in Tunbridge Wells and it was proved that this is not the case.

In Peter Pan the story is very much at the heart of the production, there is no love interest, no bloke in a frock and there is a lot less slapstick and cringeworthy gags as it concentrates more on re-telling J.M Barrie’s beautiful story of the boy who never wanted to grow up.

Jessica Punch has played the ever youthful Peter Pan 6 times and she has mastered the character, sprightly and nimble she bounds (and flies) around the stage with ease, and yes, I wanted to be in Peter’s gang, it all seemed jolly good fun and the lost boys played by students from The McAllister-Brown Dance School and All the Arts looked as though they were having a ball. 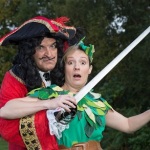 It’s all about the Hook!

The last time I saw Mark Moraghan (Holby City, DreamTeam) perform onstage was in Priscilla Queen of the Desert as Bob. Captain James Hook is obviously a very different role and Moraghan is suitably villainous but at the same time likeable and funny, a perfect pantomime villain and it makes a change for a puff of smoke and an evil fairy speaking in couplets.

There isn’t a love story in Peter Pan but the jealous Tinkerbell played by Gemma Hunt (CBeebies, Swashbuckle) tries to thwart Wendy’s (Anna Lawrence) friendship with Peter to no avail.

Mark James (Captain Smee) comes into his own in the second act. He sings, dances and performs acrobatics too! Watching his energetic routine with the acrobat troupe The Nitwits it is hard to believe he is not part of their troupe.

The set design is lovely with plenty of slick scene changes. But what makes this production stand out are the impressive special effects. Peter Pan and the children fly through London courtesy of a CGI screen and the lighting of the large Assembly Hall Theatre by twinkling stars was so pretty it gave me goosebumps. 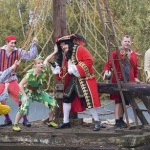 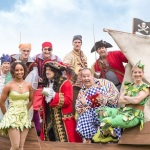 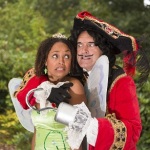 Songs are plentiful and the choreography by Tracey Iliffe deserves a special mention. Standouts for me were the Mermaid scene with Lucy Garrioch (hilarious) and the opening number which gave us a mega-mix of shows featuring London (Oliver, Mary Poppins etc).

Apart from the marvellous opening number and the amazing act one finale which was unexpected and jawdropping, (I’m giving no spoilers) I did feel that the first act felt a bit long as they set the story, however the second act had a lot more of the usual pantomime frolics, audience participation, upbeat numbers and a hungry crocodile.

Ultimately – as it should be in all good pantomimes – good triumphs over evil! The villain is defeated and a jolly good time was had by all (Hoorah)!

Peter Pan produced by UKProductions and is playing at the Assembly Hall Theatre in Tunbridge Wells until the 4th January.

For further information about times of performance and prices click here.