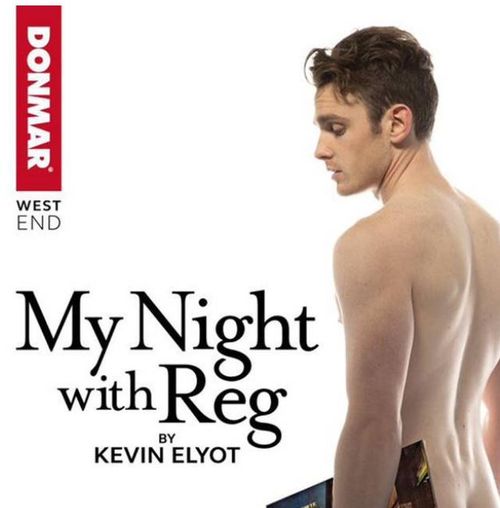 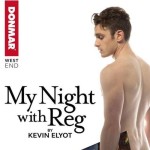 In 2015 I wanted to expand my theatre going to include more than just musicals so I was DELIGHTED to be invited by the splendid Rebecca Felgate from Official Theatre to see the Donmar Warehouse revival of Kevin Eylot’s ‘My Night With Reg’, which has transferred to the West End and is currently playing at the Apollo Theatre Shaftesbury Avenue for a strictly limited season until April 11th.

Set in the mid-eighties, My Night With Reg is a bittersweet story comedy about three gay college friends, Guy, John, and Daniel who gather to celebrate Guy’s flat warming. Their friendship is sweet yet complicated. Guy has held a flame for the unsuspecting John for many years and Daniel’s partner Reg is never seen but he is central to the story, as most of the cast, unbeknown to Daniel have had a sexual encounter with him or are in love with him.

During the course of the three act play spanning several years during the 1980s when AIDS and HIV were gaining prevalence; the lives of the friends change unrecognisably but not always as you would expect.

Jonathan Broadbent (Grand Guignol, Twelfth Night) plays Guy very sensitively who longs for love yet hasn’t the courage to tell the dashing John how he feels.

John is played by Julian Ovenden (Merrily We Roll along, Grand Hotel). He continually wrestles with his emotions during the play and is troubled by Reg’s unrequited love.

The once gregarious Daniel Geoffrey Streatfeild (MacBeth, Copenhagen) completes the trio as he deals with the burgeoning realisation that life will never be the same.

Lightness is on hand however in the form of Guy’s decorator and local barman friend Eric played by Lewis Reeves. He brings youth and distraction to the gatherings as he integrates and befriends the group.

The final members of the cast are Matt Bardock and Richard Cant who play chalk and cheese lovers Benny and Bernie respectively.

Director Robert Hastie holds the audiences attention throughout this play as he balances humour with bittersweet tenderness. My Night With Reg is warm, endearing and instigates a genuine concern for the juxtaposed characters.

However by doing so we would have missed out on the wonderful décor by Peter MacKintosh, costume and 80’s music which made it so endearingly nostalgic. Not to mention there is a most entertaining rendition of Bowie’s ‘Starman’.

Once again I thank Theatre Official for the opportunity to see My Night With Reg and I dutifully uploaded my seat review to Seat-Plan.

This write up was based on a PREVIEW performance on 20th January 2015 at the Apollo Theatre. I wish the cast and creatives of MY NIGHT WITH REG a succesful run.

Cast and Booking Information | My Night With Reg

3 thoughts on “My Night With Reg | Apollo Theatre | Review”