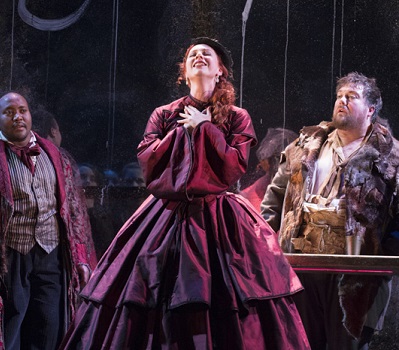 Young local singers from Crawley to take the stage with Olivier Award-winning company this May in Puccini opera classic! 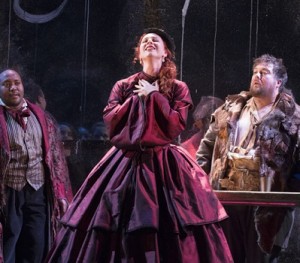 Fourteen young people from the Sway Perform theatre group join English Touring Opera on stage this May when the Olivier Award-winning opera company brings a season of Italian opera to The Hawth in Crawley.

The children, aged between 6 and 11, have been recruited especially for ETO’s tour to sing as a children’s chorus of street urchins in a new staging of Puccini’s classic opera La bohème, which is performed at The Hawth on Wednesday 6 May.

The children perform in Act 2 of the opera, in a Parisian street scene set outdoors on a cold winter’s night near Christmas. In the scene they watch a Punch and Judy show being performed on stage, sing a song about ‘Pa’Guignol’, the name of the puppet, and are given presents by the puppeteer, who is trying to trick their mothers into buying them for their children.

This is the first time that Sway Perform have worked with ETO to provide young performers for the company’s shows on stage.

Liam Howlett who leads the Sway Perform class at The Hawth on Tuesdays from 4.30pm-6.30pm said “This is a hugely exciting opportunity for the class. Being able to perform, even to just family, is so important for growth and enjoyment, but performing on a large stage with a professional company is an incredible experience that you’d struggle to find elsewhere.”

Tim Yealland, ETO Head of Education, said: ‘It is fantastic for us to have these talented children from Sway Perform on stage with us in La bohème. Their energy and enthusiasm will perfectly complement the story of Parisian street life in the nineteenth century, and it is particularly good to be working with this wonderful group for the first time.’

Widely acknowledged as one of the greatest and most moving operas of all time, La bohème is a story of young love set in Paris in the 19th century.

A poet, Rodolfo, meets the seamstress Mimì and they fall in love, but poverty and ill-health force them apart. ETO’s production is sung in Italian with English subtitles, in full costume, accompanied by the company’s orchestra and chorus.

ETO’s visit also sees a performance of Donizetti’s rare opera The Siege of Calais at The Hawth on Thursday 7 May, which tells the story of the citizens of Calais who offer up their lives to save their city from the besieging English army.