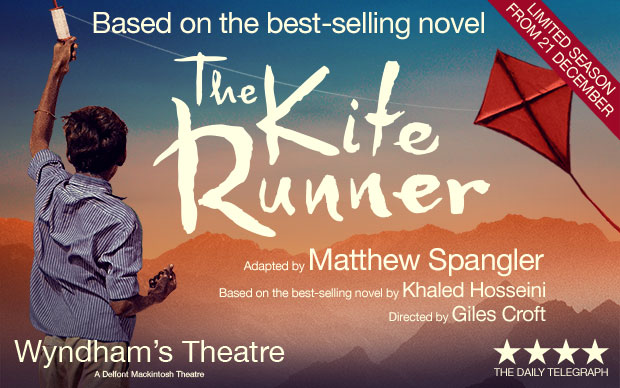 Back in 2012 I read The Kite Runner  by Khaled Hosseini, a poignant novel that enlightened me on the last four decades of history of Afghanistan and its people. I felt like a completely ignorant Westerner for only knowing about this country what the media had spoon-fed me, but Hosseini’s beautiful novel opened my eyes by showing the human side of the wars in that part of the world and the terrible suffering of the people within. And now this remarkable and memorable story has made its way onto the stage; travelling from California to Nottingham and eventually landing in London.

The story is told through the perspective of Amir, a privileged Afghan boy living in a large house with his father, the servant and the servant’s son Hassan. Amir and Hassan, only a year apart in age, grow up together and form a close bond, though Amir doesn’t think of it as a friendship as much as Hassan does – not on the surface at least. And through some horrifying events that happen to the boys when they’re still young, escalating during the annual kiting tournament and highlighting their differences in background and privileges, the two eventually grow apart completely.

In fact, Amir flees to America with his father, leaving the servants far behind them. Amir and his father were very well off in their own country, but in the US his father works at a gas station six days a week to pay the rent and in the weekends the two try to earn some extra cash by selling things on flee markets. During this time Amir grows up, falls in love, and starts to reflect on some of the events from his youth, wondering if there is something more that he could’ve done. It is when he has build a life for himself and his wife that he is given a second chance of sorts; if he is finally brave enough to take it. 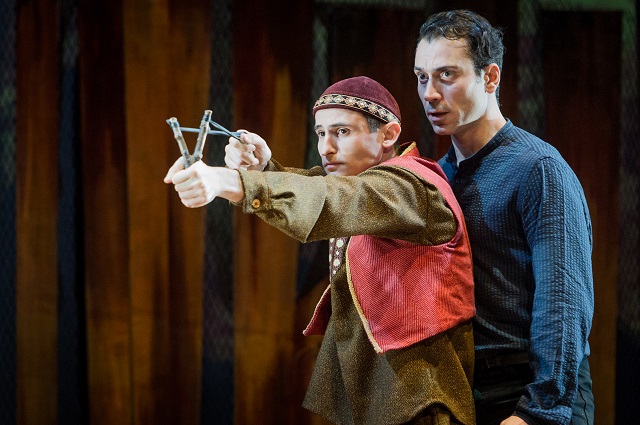 Written for the stage by Matthew Spangler, this production is a very true adaptation of the modern classic. While a narrator works well on the page, I often find this a jarring storytelling method in theatre, however for The Kite Runner this worked beautifully. Combined with the simple staging and set design, there were few distractions from the core store and at times it really did have that same feel as getting lost within the pages of the book.

Ben Turner was incredible as the narrator and tortured protagonist of the play. While initially it felt slightly out of place to have an adult man play Amir when he was still a young child, especially because the actor playing Hassan (a hugely moving performance by Andrei Costin) so obviously looked many years his junior, he managed to get through that age barrier by portraying a very realistic young boy, confused about what he is told the world should be like and what he thinks the world is like.

He wasn’t a likeable main character by any means though. The story of Amir growing up is largely overshadowed by the cowardice he feels in a lot of situations he’s put in and the guilt that follows soon after. There are many times I wanted to slap some sense into the character and wished he had made different choices. Some of the things he witnesses are beyond inhuman, no-one should ever have to suffer through that. And yet, despite all this, I was entranced by his journey throughout the entire show. 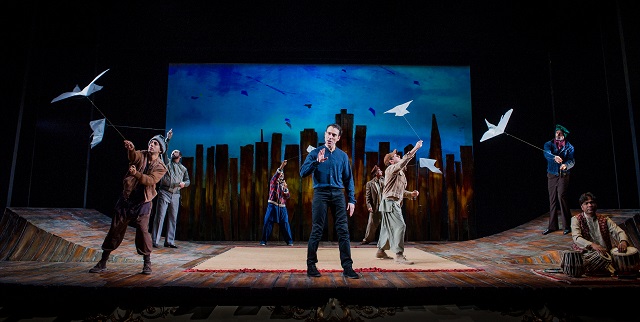 And it wasn’t only Amir that stood out. Hassan was also an memorable character, in large part due to Costin’s incredible performance. Mostly silent, he was able to convey a wealth of feelings and emotions in subtle gestures and movements, and I found him to be the true heart of the play. Another portrayal that must be mentioned is that of Emilio Doorgasingh as Amir’s father. Going from the privileges and riches he was used to in Afghanistan to the unfamiliar grounds of America where was poor and didn’t know the language, all while bringing up a son by himself, created a huge change in character, and Doorgasingh’s interpretation was delightful and moving in equal matters.

I urge everyone to see The Kite Runner as it is an incredibly rewarding play. Don’t expect a ‘happily ever after’ ending, but instead be prepared to feel incredibly angry at and intense sadness for the characters on that stage. And most of all, learn from the unfamiliar words, customs and names mentioned, and see Afghanistan in a different light.

Yes, the story is harrowing and difficult to watch at times, but it’s also beautiful, moving and hugely enlightening.

This review was first published on Zarina’s own blog Page to Stage Reviews – check it out!