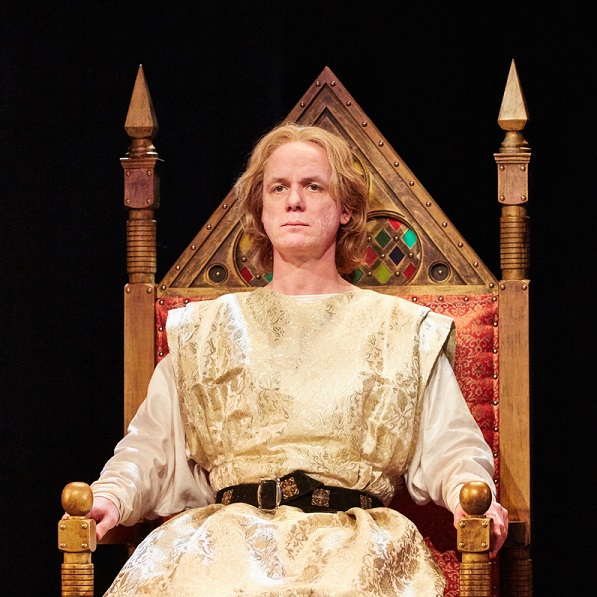 The Rose theatre, Kingston until the 5th June

You would think that medieval England under the reign of a inept and insecure King wouldn’t have much in common with modern day life, but a trip to Rose Theatre in Kingston to see a production of William Shakespeare’s King John last night taught me otherwise.

What I knew about King John before seeing this play could have been written on the back of a postage stamp. He was involved in the signing of the Magna Carta and he was a key player in the story of Robin Hood but neither of these stories are alluded to by the Bard.

Instead we are treated to a story of changing allegiances between superpowers, a conflict between state and religion and the question of whether we should stay loyal to the crown. All subjects sounding very familiar to those being discussed in today’s media. Unfortunately this play doesn’t answer whether or not we should leave the EU or explain the current Middle East crisis but we are assured that whether we like it or not, things are just the same as they have ever been.

“T’was ever thus, and will be”. Phillip the bastard.

Award winning director Trevor Nunn returns to the Rose Theatre to direct King John after the success he had last year with ‘The War of the Roses’ and you can see why. Based on the Elizabethan Rose Theatre on Bankside and with it’s close seating and intimate space the Rose Theatre in Kingston is a perfect place to set a Shakespearean play. Enhanced by the traditional set and costumes designed by Mark Friend we are transported back to the days of medieval England.

Jamie Ballard takes on the title role of King John who ascends to the throne after the death of his brother King Richard I, usurping another claimant, his young nephew Arthur (Sebastian Croft). Ballard cleverly creates a monarch who is immature and unsure of himself and constantly needs reassurance from those around him particularly his stalwart mother Queen Elinor (Maggie Steed). After the queen’s death at the end of Act One, John makes a series of dodgy decisions resulting in further alienation.

During John’s quest for power and land over the King of France (Dale Rapley) and the Pope’s representative Cardinal Pandulph (Burt Caesar) he is watched over by his cousin (Richard I’s illegitimate son) Philip the Bastard. Philip is an astute, loyal man who has risen to the offer of a knighthood in return for supporting and advising the king. Here he is played by Howard Charles who does an admirable task of conveying to the audience his growing contempt for the changing faces of politics.

King John runs at over three hours long and has so many laborious twists and turns within the plot and it is easy to see why this play is not often performed. Yet Nunn’s production is not only a great addition to the celebrations surrounding the 400th anniversary of Shakespeare’s death but also teaches us that there is definitely more to King John than the Magna Carta and has me reaching for the history books to learn more.

King John is being performed at the Rose Theatre in Kingston until 5th June.

One thought on “King John | The Rose Theatre, Kingston | Review”