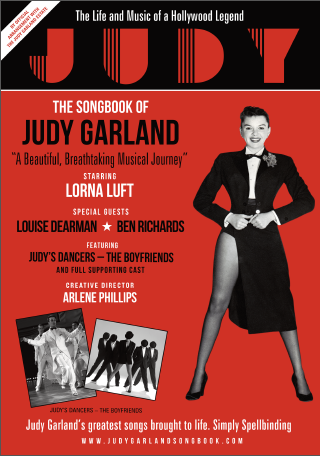 The Life and Music of a Hollywood Legend 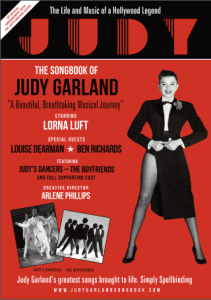 The Songbook of Judy Garland

International theatre producer David King is delighted to announce the UK premiere of a breathtaking new musical show, JUDY – THE SONGBOOK OF JUDY GARLAND, which will tour some of the UK’s finest theatres, opening at the Edinburgh Playhouse on May 8 2015. Highly-acclaimed choreographer and theatre director, Arlene Phillips, will be the Creative Director on the production. This will be the only Judy Garland Show in the world authorised by the Judy Garland Estate. 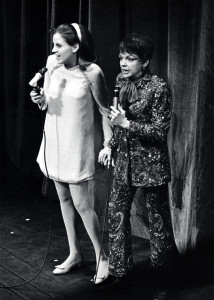 together with irresistible classic hit songs from some of Judy’s hugely popular films such as A Star is Born, Meet Me in St. Louis, Easter Parade and The Wizard of Oz. The set of songs will include I Got Rhythm, The Trolley Song, The Man That Got Away, Get Happy,Zing! Went the strings of my Heart, and the song that is synonymous with Judy Garland, Over the Rainbow.

JUDY – THE SONGBOOK OF JUDY GARLAND, has Arlene Phillips as Creative Director and is directed by Christopher Manoe.

Lorna Luft is considered to be part of Showbiz Royalty, as the daughter of Judy Garland and the half sister of Liza Minnelli and a highly successful stage, film and TV actress and singer. She has appeared in numerous film, TV and stage shows, including White Christmas, They’re Playing My Son and Babes in Arms. Lorna appeared on stage regularly with her mother as a young girl and continues to maintain a high profile concert career.

Louise Dearman is the darling of the West End, and has performed in leading roles in many West End musicals including Wicked where Louise was the first actress to play both the good witch and the bad witch, Glinda and Elphaba. Louise also starred in Evita, Cats and Guys and Dolls to name just a few.

Ben Richards has played lead roles in West End and touring musicals including Rock of Ages, Oliver!, Priscilla Queen of the Desert, Guys and Dolls and Saturday Night Fever. TV includes roles in The Bill and Footballers Wives.

Arlene Phillips (CBE) is one of the UK’s best known choreographers, and also works regularly as a theatre director and is a well know television personality. Arlene has worked on numerous stage productions, (The Wizard of OZ, Starlight Express, Grease) TV (So You think you can Dance) and films (Annie and Private Dancer).

Confirmed Tour Dates for JUDY – THE LIFE AND MUSIC OF A HOLLYWOOD LEGEND: