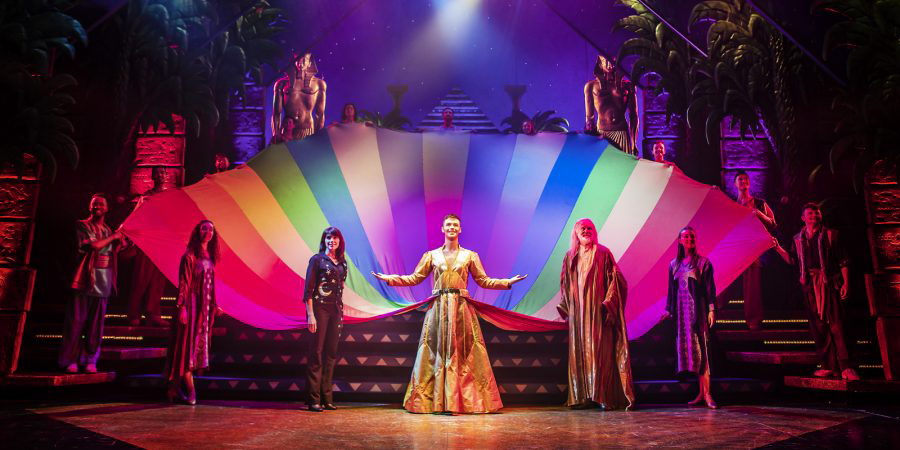 Tim Rice and Andrew Lloyd Webber’s 1970’s popular musical Joseph and the Amazing Technicolor Dreamcoat is touring the UK in 2019 under Bill Kenwright’s direction and received a very warm welcome to The Hawth Theatre, Crawley, on Tuesday night.

The story is powerfully and sensitively narrated by song throughout, by the excellent West End worthy performance of Trina Hill, professionally supported by a choir of local children from the Theatre workshop.  The story is based on the biblical story of dreamer Joseph and his coat of many colours from the Bible’s Book of Genesis.

Joseph is the known favourite of 12 sons, to Jacob (Henry Metcalfe) and when a gift of an amazing technicoloured coat is given to Joseph, coupled with the years of constant annoyance of Joseph’s enlightenments and gloating from his dreams, brings about an attack on Joseph and a ceremonial robbing and ripping of the coat with Joseph being sold by his jealous siblings as a slave and sent to Egypt. Here his story continues and he finds his dream interpretations are even more life changing.

With instantly recognisable and unforgettable songs ‘Any dream will do’, ‘Close Every Door’ Jaymi Hensley takes on his first major musical role. Known as a member of Union J, X Factor winner in 2012, there was a curiosity to see if he could deliver the performances of previous Josephs (Jason Donavon, Phillip Schofield, Donny Osmond) but similarly to Joe McElderry and Lee Mead this seems a rite of passage into musical theatreland and Jaymi deserves and proved he has a place in this theatrical line up of Josephs.

The supporting cast of the brothers, Pharaoh and the handmaidens were also truly excellent bringing the theatre alive with the songs (Pharaoh’s story, Benjamin Calypso) and dances of the musical. The show is fun and engages and captivates the audience, therefore, it is no wonder that the show is being billed to return to London later this year with another star-studded line-up.

The tour is currently in The Hawth Theatre, Crawley between 12 – 16 March