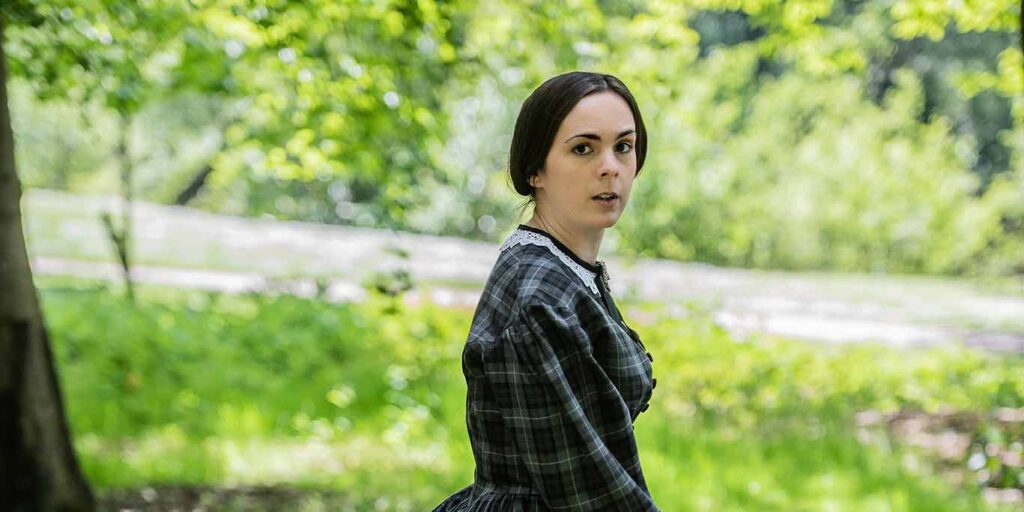 Jane Eyre is surely one of the most beloved and enduring novels of the mid-19th century, depicting one woman’s vulnerability and limitations and her determination to overcome them. Charlotte Brontë’s epic tale details the growth and development of the main character through several periods of her life, plus it’s a love story! Interestingly it was written around the same time as the word ‘feminist’ first came into being, and Jane Eyre is arguably a fine example of an early truly independent, spirited, single-minded woman forging her own path on her own terms – as far as was possible in those times. It is set somewhat earlier in the century in northern England when Britain was heavily into colonisation, and travelling to its colonies for lengthy periods of time was commonplace.

This fact serves to create an important backdrop to this piece, whilst at the same time illustrating the established themes and mores of the home grown British class system, and the role of women within it.

Jane Eyre was the first ‘grown up’ book I ever read, at about the age of 12, and I remember being stunned by it. More so when I discovered Charlotte Brontë wrote it under her male pseudonym of Currer Bell. (I went on to devour ‘Pride and Prejudice’ afterwards, both books probably set me on a certain path as a soon-to-be rebellious teenager!). So call me a purist, but I’m a little precious about these powerful early influencers and slightly wary of the possibility of them being ‘messed about with’….I needn’t have worried. Nick Lane’s superb adaptation captured all the crucial elements of this brave novel whilst giving it a few modern tweaks here and there, and one or two genuinely amusing moments.

Blackeyed Theatre is a Company formed around 15 years ago, based at South Hill Park Arts Centre in Bracknell, with an impressively significant body of work, having toured both nationally and internationally. They are an innovative and multi-talented Company combining the spoken word with music, and sometimes even an occasional bit of dancing! They are making a welcome return to the Connaught Theatre in the centre of Worthing, last seen there around 18 months ago in ‘Sherlock Holmes and the Sign of Four’.

Since that time, the Connaught Theatre has been experiencing a time of great transition, having moved from the control of the local council to ownership by an independent charitable Trust. The transformation is already apparent, and ongoing. The Connaught and its sister Studio both double as cinemas and theatres, and are keen to support local talent from a huge variety of genres, as well as staging ‘big shows’, such as circus, dance, pantomime and big-name speakers and comedians. Accessible, genuinely welcoming and with an exciting new season recently announced, it is fast becoming THE go-to all-round entertainment venue on the Sussex coast.

So …. this fresh and ingenious production of Jane Eyre does not disappoint. The curtain is up when we enter and the set is in full view – an impressive construction of angled wooden poles, with odd pieces of furniture strewn around plus part of a staircase. An upright piano is to the left of the stage. At first sight, it appears to be a slightly Gothicthemed attic space, but it wasn’t long before I understood how eminently versatile it served as the perfect backdrop to every single scene.

The play opens with Jane (Kelsey Short) as a young girl in the wealthy Reed family home, being bullied by her cousin John Reed (Oliver Hamilton), after being forbidden to play with her cousin Georgianna (Eleanor Toms). The performance is interspersed with narration to the audience throughout, which works well. Jane is a ‘lowly orphan’ only ‘allowed’ to live with the Reeds because of her aunt’s charity. We see immediately how Jane’s feisty nature can manifest itself when her patience is tested beyond endurance, time and time again, by the constant cruel and unjust treatment she is subjected to at the hands of the nasty Reed family. (The father had been kind and loving, but was now dead.) Jane is chastised and punished, and although her independent self-willed nature is already evident, it is tempered with moments of self-doubt, beautifully conveyed by Kelsey Short’s representation of Jane’s flares of temper alternated with a cowering posture where she is reminded of her reduced status and limitations.

It must be said here that each actor in this versatile Company plays several parts, – except for Jane who necessarily needs to stay in character, never leaving the stage. They also all contribute to the wonderful musical pieces (composed by George Jennings) on piano, violin, cello and guitar, seamlessly moving from playing an instrument to resuming their parts, quite naturally. They even sing! Just before the second act, they join forces to entertain us with a lovely little minstrelsy piece, entirely in keeping with the period. Delightful.

The play progresses from scene to scene with ease: Jane’s removal to Lowood School and subsequently to Thornfield Hall, where she encounters the ‘brooding loner’ Edward Rochester (Ben Warwick), having being engaged as governess to Edward’s French speaking protegée, Adele (Eleanor Toms). This all requires clever use of props and perfect timing, and this production IS very clever. I thought the symbolism and metaphor were nigh on perfectly presented; I especially liked the actors’ use of benches, by holding them up in front of them to convey doorways and corridors. Also thought the innovative appropriation of the back of the other multi-tasking male actor (Oliver Hamilton as St John Rivers/Mr Mason) supporting Mr Rochester, to make it appear as he were in bed, was a stroke of genius! The lighting effects were truly superb and the restrained use of masses of theatrical haze to depict fire and smoke was appreciated (I suspect especially for patrons in the front rows).

Camilla Simson as Mrs Fairfax/Bertha Mason/Aunt Reed/Mary Rivers is simply wonderful and I loved the fact that she uttered a couple of minor swear words, and Jane hotly denied being an ‘automaton’. Kelsey Short also gave her a lovely sense of mischief, giggling with the Rivers sisters (Eleanor Toms and Camilla Simson) and describing Edward’s rumoured to-be-intended, Blanche Ingram, (also Eleanor Toms) as a ‘dewy-eyed limpet’. Delicious!

All in all, I really can’t find fault with this impressive production, it has something of everything, and delivers strong performances from a talented company, supported by excellent staging and atmospheric music. Maybe I could have done with a little more emphasis on the dark and churlish side of Edward Rochester – he came across as tall, handsome, and at times a bit too nice, to contrast with the beautifully executed bland and boring character of St John Rivers (Oliver Hamilton), and possibly the eerie laughter and screams emitted by Bertha Mason (Camilla Simson) could have been slightly more disturbing and alarming, but these are tiny things.

“Reader I married him”