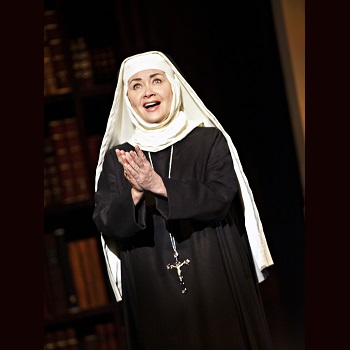 Jan Hartley is currently playing Mother Abbess in the national tour of The Sound of Music which is a musical close to her heart. Here she talks about why and about her career to date.

This is a show you’re more than familiar with having played Maria and Mother Abbess – was it a no-brainer to accept the part?

Absolutely. It is a fantastic part. It’s got the most amazing song which closes Act I and I get to reprise that at the end of Act II, so it’s nice to be able to do it twice. It’s actually a very rewarding role so I’m really enjoying myself.

What is it about the Mother Abbess that attracts you to the role?

I think the fact that she’s such an experienced woman and she’s developed a calmness in her life, and a maturity in the way she looks at everything in life, which is a great qualification for being Mother Abbess because obviously you have to look after all the nuns, look after all their pastoral care, and make sure if they have any problems, worries or issues, you try and put everything in perspective for everybody, I think that’s how it is. Interestingly enough, the calmness of the role actually helps to keep me calm on stage, because you naturally think, “ok, just take everything as it comes”. There’s a kindness and surety, and the maturity that comes with age. I actually think Jenny Agutter as Sister Julienne in Call The Midwife is a great role model for the part, actually. More so than the Mother in the film, I would say. She’s just that little bit kinder and a little bit more understanding, which is what I’m trying to do. It’s all about being firm but fair and kind.

What are your memories about the Sound of Music film? Did you watch it as a child?

My history with the film, and this is quite funny, I was about six years old and my father took me to see it in the cinema and it can’t have been out that long. I became completely obsessed, so much so that I nagged him to take me all the time, so I must have seen it at least 20 times. My Christmas present that year was the vinyl album of the soundtrack and that cover must have been so worn out, I played it all the time and learned every song. I used to run up and down the street singing The Hills Are Alive all the time. And my mother told me that my next-door neighbour came out once and said, “I hear the flipping hills are still flipping well alive!” (laughs).

So is that was started your love of musicals and wanting to pursue a career as an actress and singer?

I really think it is, yes. Julie Andrews had an enormous amount to do with it, she’s responsible!

Favourite song/scene from the movie/musical?

When I played Maria, which was in 1985/86 I think, I realised it’s one of those shows that you love being in because you love performing the music. There are shows that you’re in and you think, yeah, this is nice, and the audiences love it, but this is something that’s so fantastic. Every single tune is amazing, we all know them all, they’re all memorable, but a favourite song? I think possibly Something Good, the love duet. It’s a very difficult one to choose really. Raindrops on Roses, it’s a classic and I get to sing it in the stage version with Maria which is terrific. In the film she doesn’t but a few things have changed around. They altered things for the film which weren’t true for the stage show.

Do you know any of your cast mates? How are you all getting on?

I knew a couple of the cast members, but everyone’s lovely. I knew Martin (Connor, the director) because we’ve actually acted together, he’s actually a very talented actor, so we first met that way, but this is the first time I’ve worked with Martin as a director and he’s fantastic. It’s a terrific team which is great because if you’re on tour with people for six months, it helps if you can get along. We’re all really looking forward to it.

Do Stephen and Danielle make a good Maria and Captain?

I think it’s fantastic casting. Stephen is tall and handsome in a rugged way, so can play the disciplinarian really well. And it’s nice to see him melt. Danielle is just superb, she’s technically wonderful, she’s got a beautiful sense of the role and sings it beautifully, so the casting couldn’t be better.

Any advice for your younger cast members, especially Danielle who is playing Maria for the first time?

I think I’d say pace yourself during the performances, but again, she’s terribly good. Some people who get cast in musicals are cast because they are television names and haven’t had the training behind them so doing eight shows a week is an issue. I would be very surprised if Danielle had any problems that way, she’s had good training. I’d also advise to keep yourself grounded, that’s a very important thing. I always manage to do that, bit showbusiness was never the be all and end all because once that happens, I think you stop being empathetic with the characters you’re playing because you leave your life behind and you’ve got to be able to put your life experiences into the roles you’re playing.

You’ve played some iconic roles in your time – what has been your favourite to date?

Playing Christine in Phantom of the Opera was a wonderful experience which I did for nearly two years and again, I worked with a fantastic creative team and cast. When I was playing her, it was in the days when Phantom hadn’t been open that long and the queues around the theatre went on and on and on. And that was every single performance, so you had the adrenaline and the excitement while also thinking, I’ve got to do this as well as I possibly can because these people have waited months for their tickets, they’re queuing up in all weathers to see the show!

Not many people will know this, but you’re also a Harley Street qualified Semi-Permanent Makeup Specialist – a far cry from musical theatre! What got you into that?

Well, I think when you get older, especially in musical theatre, you realise you can’t necessarily rely on there being the roles for you. Firstly, if they are available, and also that you want to play. For instance, I haven’t toured for a long time because I like being at home, it has to be something I really want to do to take me away. About four years ago I decided I wanted to retrain in something that was really interesting and creative that I could do from home. I actually have my own clinic, which I am endeavoring to keep running while I’m on tour. It’s interesting, it’s rewarding and the before-and-after experience makes me feel good.

This was a syndicated interview.

The Sound of Music is playing at the Congress Theatre, Eastbourne 13th-18th July 2015 – for more details click here.