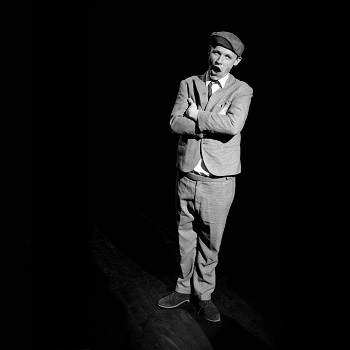 A new play about the life of comedian Norman Wisdom is due to premiére on September 17th at the Capitol Theatre in Horsham. Sammi O’Neill caught up with writer and performer Jack Lane to talk about the play and what Norman Wisdom means to him. 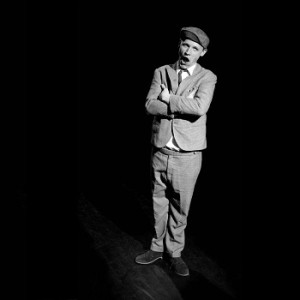 An Interview with Jack Lane about Wisdom of a Fool

Sammi – Jack you are having your new play ‘Wisdom of a Fool’ premiére at the Capitol Theatre in Horsham what is your connection there?

Jack – When I left school I got a job at the Capitol. It was just reopening after a big refurbishment project. I started with amateur dramatics working backstage and eventually got work at the theatre. After about four years I started acting as well and so I am lucky because I understand most aspects of theatre.

The Capitol have been very supportive to me and have given me career breaks where I was able to go off and do a little acting work, but it has always remained a base for me. That’s why I wanted to open the show here, it is a beautiful theatre and I have such good connections here. It really has a very special place in my heart.

I have now quit my full time job at the Capitol to concentrate on Wisdom of a Fool because I have so much faith in it and in Norman Wisdom’s story. I think the story needs telling and it was a case of ‘it’s now or never’.

It is also great to open the show in Sussex as Norman Wisdom has a lot of links to Sussex. He lived in West Chiltington for many years. His son Nick still has a shop in Haywards Heath. Norman was also the president of HAODS (Horsham Amateur Operatic and Dramatic Society). Norman also did some filming around the area as well, in Crawley and Brighton including scenes in his film ’One Good Turn’.

I think it is nice to start the show off in Sussex.

How did you come to write Wisdom of a Fool?

I had written most of but as I was working away on Act One I realised I needed some help with Act Two so I asked a friend of mine Martyn Bell, who also is a fan of Norman Wisdom to help put some structure to Act Two and to add another voice to it. Martyn took a lot of pressure off me which was needed.

You obviously have a huge fondness for Norman Wisdom.Tell me a little about your fascination with him.

I used to enjoy the ‘Carry On’ films and when I was about 11 or 12 my Mother suggested that I watched some of Norman Wisdom’s films. When I watched them I thought he was superb and I fell in love with his work. I suppose as a child I loved the idea of an adult being silly. As you get older your tastes change but I found I appreciated him on a totally different level, I like his physicality. He also knew exactly what to do on camera, the slight tweak of his face or body movements were perfection. He had a great sense of balance, rhythm and timing. He really was an incredibly talented man with a fascinating backstory. I think he is one of the UKs most interesting comedians.

There have been many plays about comedians, there have been about 5 Tommy Cooper plays, 3 Eric and Ernie plays and plays about Tony Hancock and Kenneth Williams, but no one to date as far as I know has done a play about Norman Wisdom and I have never understood why.

But obviously now I am rehearsing it I do know why.

What are the challenges?

Finding both his voice as just Norman and also his character voice and ensuring there is a clear difference between the two. There isn’t a lot of footage of him being interviewed in his forties, there is a lot of him in his older years but the play pitches him in his 30s and 40s so finding his voice and making sure it sounds natural and realistic and not forced has been quite a challenge really.

It has taken a while but I am happy with it now. 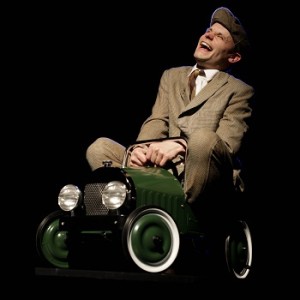 It is a one man show. That must be a lot of pressure.

It is a hell of a lot of pressure. There are about 30 characters in the show and I play all of them.

The play deals with his Mum who left the family home, his violent Father, the later years when he divorced from Freda. It shows the full gambit and at times is quite traumatic.

But then you get the wonderful moments as well. I do the routine where he performs a gig at Collins music hall, also a routine from the film ‘Trouble in Store’ and of course I sing ‘Don’t laugh at me ‘cause I’m a Fool’ in Act Two.

It is certainly not all comedy. I’d like to make that very clear. It is definitely a play looking at all aspects of his life.

I can imagine people who knew his work would happily come and see the play but how are you going to reach out to a younger audience who are less familiar with his work?

The demographic age that is familiar with his work is 50+. Many young people say to me that they will come but have no idea who he is, so it will be tricky.

However I hope that Wisdom of a Fool stands up as a piece of theatre as well. When young people come and see the play I hope that they will learn something about Norman and his work. I want to inspire them to go away and want to know more about him and watch his films. This happened when I adapted Steptoe and Son for the stage and it was very satisfying. I remember somebody coming to see the Steptoe and Son and then saying that they were going away to buy the box –set!

If people come along, enjoy the play and then go away and watch the originals it means that I have done my job which is very important to me.

On the poster it claims that Norman Wisdom was Charlie Chaplin’s favourite clown. Is this true?

Norman was a huge fan of Chaplin’s and idolised him to some degree. When he went to America he wanted to meet him. Norman rang the studio explained who he was and asked to speak to Mr Chaplin. A few seconds later Chaplin came to the phone.

Norman introduced himself and told Chaplin that he was a big fan and Chaplin replied that he was already familiar with Norman’s work and invited him to the studio.

They met and chatted for about a hour and eventually Norman plucked up the courage and asked Chaplin if he would do his famous walk, and Chaplin replied that Norman must do the same.

So they did their trademark walks to the delight of everyone watching and Norman was thrilled to meet his idol. Chaplin then said that Wisdom was his favourite clown which is which is an unbelievable accolade.

Wisdom of a Fool is running at the Capitol from the 17th to 19th September with a matinee so that is four performances, do you have any further plans for the play?

This is its first outing, so it’s basically a trial to make sure it gets onto its feet, make sure it’s working and if there are any tweaks and changes that I need to make. The plan is to then take it on tour in 2016.

We are already getting venues approaching us which is incredibly flattering but that just proves that Norman is still very popular.

The Leicester comedy show in February, and an 800 seat theatre in Lowestoft are both interested in the play which is wonderful! 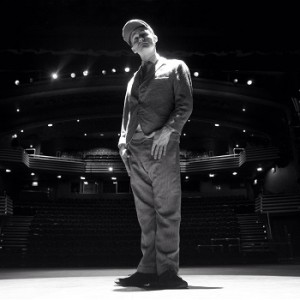 Is there much scenery and many props or is the play easy to transport?

It is set in a storeroom of the Rank Organisation, so there are lots of bits of set and props from all his films all covered in tarpaulin but the story is very performance driven and the set is just there to amplify things.

It is designed to travel well because touring is becoming increasingly financially difficult and you have to be very careful about the costs, however coming from a background of working in the theatre means I know how to reduce costs. I am very lucky to have that grounding.

Does it need to be in a big theatre or will it fit into a studio theatre?

It needs wings so if someone has adequate wing space it’ll be fine but I am certainly not hankering after massive theatres, I am happy to go into smaller venues but I’m not sure it will really fit into a studio unless we re-worked it.

It is all sounding very exciting.

Thank you it has been a lot of hard work but I have been working closely with Norman’s children Nick and Jackie who have been unbelievably supportive. As an actor you can be prone to a lot of self-doubt which is particularly true in this case. I have had many sleepless nights. I feel as though I have taken on a huge responsibility, portraying this great man and I just don’t want to let anyone down particularly Nick and Jackie.

Do you have a lot of contact with his family?

Lots. I have catch ups quite regularly, they are very interested in the project. They are so lovely. My Grandad played cricket with Nick back in 60s or 70s which is a weird coincidence.

Nick is still based in Haywards Heath so it’s nice to pop down and have a chat and a catch up. Nick has actually lent me Norman’s suit which is incredible. So I do actually dress in Norman’s own suit in Act Two.

How does that make you feel?

Oh it’s incredible, it is unbelievably special. When I first put it on I froze, it was an extraordinary experience to have.

Have the family seen any rehearsals?

I am aware that this is their family on show, it is their Dad, their memories. I am mentioning sensitive subjects like divorce and that’s a family affair. It is very important to me to have their approval.

If they are happy I am happy.

It is fantastic that you have a stamp of approval from the family.

I will be even happier when they’ve seen the finished product. It is two completely different things a table-read and to actually see it on stage. Their support means the world to me and I am very grateful for it. It’s a great support to me as I portray Norman

Wisdom of a Fool is being performed at the Capitol Horsham from the 17th – 19th September 2015. Further Details and Booking Information Here.

One thought on “Jack Lane | Wisdom of a Fool | Interview”